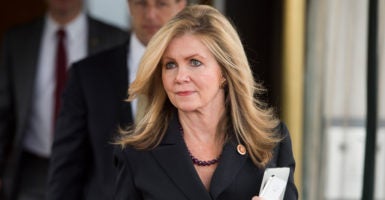 In January, a record number of women will serve in the U.S. House and Senate. Depending on the outcome of races that are still too close to call, the 116th Congress will have anywhere from 109 to 117 women.

But now imagine if all those women were headed to Congress following imposition of a gender quota. Few people would be celebrating women’s successes then. Instead, they would be viewed as “token legislators,” or “Title IX” recipients—incapable of being elected in their own right.

Ostensibly pro-women policies might sound good to those who want to impose certain measurable outcomes—such as equal numbers of women in high-power positions or exact parity between all men’s and all women’s wages—but they could instead backfire on women.

And having been elected by a free vote of their constituents—often defeating male candidates—female legislators earn the same respect as men.

If Congress were to pass a gender quota law for legislators, as California did for boardrooms of corporations headquartered there, it would demean female legislators instead of applauding their successes.

Imagine female lawmakers up against a bunch of male colleagues who resent the leg-up the women got into Congress, or being told by constituents at townhall meetings that they don’t deserve their position because they didn’t actually earn it.

That’s what’s happened with the “golden skirt” phenomenon. After Norway and other European countries passed corporate boardroom quotas, women suddenly had a huge advantage over men.

But instead of creating a general boost in the ranks for women, boardroom quotas in Norway led companies to all seek after the same small group of eligible women. One such “golden skirt” sat on the boards of as many as 90 companies at the same time.

And as an Economist article headline declared, “Gender quotas at board level in Europe have done little to boost corporate performance or to help women lower down.”

Forcing companies to maintain gender-based equity in pay would require them to impose one-size-fits-all jobs that actually wouldn’t fit many working women’s needs and desires.

Women tend to place more value on nonwage-based job benefits, such as a flexible work schedules, on-site child care, or more generous fringe benefits. But those features wouldn’t show up in employers’ pay records, so they would be unlikely to offer them.

Moreover, equal pay for equal work is already the law of the land.

And when you take into account the measurable choices men and women make regarding things such as their occupation and hours of work, women are essentially on par with men. (Non-measurable factors, such as flexibility, likely account for the small unexplained gap in pay.)

The fact that the number of women in Congress has increased three and a half-fold since 1992 without any legislation addressing the gap shows that women are fully capable, when they choose to, of shattering so-called “glass ceilings” on their own.

Let’s hope that the 116th Congress pursues policies that would create equal opportunities for all women and men alike, instead of ones that would benefit only an elite group of women or that would limit women’s access to jobs that meet their individual needs and desires.