Americans Should Be Grateful for a Poland That Prospers and Protects 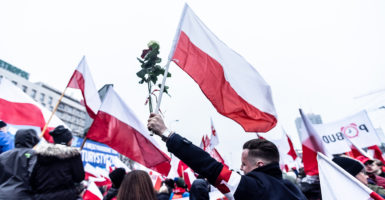 A recent trip to the one of American's most important allies illuminates what a vibrant democracy Poland is. (Photo: Kamila StepienLe Pictorium/ZUMA Press/Newscom)

We celebrated a significant milestone this Veterans Day: 100 years since the end of World War I.

But another noteworthy anniversary fell on that day. Nov. 11, 2018, also marked the centennial of a free Poland, one of America’s most important allies in Europe.

It’s been a rough journey, though. The road since that historic day in 1918 has been pockmarked with strife.

Being situated between Germany and Russia is the global equivalent of drawing the short straw. World War II officially began on Sept. 1, 1939, when Hitler’s army invaded Poland from the west. Only 17 days later, the Soviets rolled in from the east.

Thanks to the postwar Warsaw Pact, Poland wound up in the Soviet bloc of states, its people ruled by communists who did Moscow’s bidding.

But this state of affairs was not destined to last forever. The determined and courageous efforts of certain key leaders—from President Ronald Reagan and British Prime Minister Margaret Thatcher to Pope John Paul II (the first Polish pontiff) and Solidarity leader Lech Walesa—effected a remarkable transformation in the 1980s.

Together, they and the freedom-loving people of Poland rewrote history. Their country today is a NATO member and a loyal friend of the United States.

I was back in Poland just (some weeks) before its recent round of elections in October and met with Prime Minister Mateusz Morawiecki. Once again, I was struck with what a vibrant democracy it is.

It also features an open and growing economy—the European Union’s sixth-largest, in fact, thanks in part to a strong manufacturing sector. Poland ranks 45th out of 180 countries in the latest Index of Economic Freedom. Sure, it has a couple of weak spots, but considering how long the country suffered under communist rule, that’s really a remarkable accomplishment.

Poland’s strong institutions, the index editors note, enabled it to become the only European country to record economic growth during the 2009 credit crisis.

More importantly for the United States, Poland is key to a safe Europe. It is a vital bulwark against Moscow’s geopolitical designs. As historian Lee Edwards has pointed out:

As the next-door neighbor of Ukraine and with uncertainty about Russia’s next aggressive move, Poland matters. Adjoining as it does the three Baltic countries of Estonia, Latvia, and Lithuania—all prime targets of Russian President Vladimir Putin’s imperialist design—Poland matters. As the largest, most prosperous, and most entrepreneurial member of the old Warsaw Pact, Poland matters.

Poland certainly does matter, which is why Americans should be grateful that relations between our nations remains strong. Georgette Mosbacher, the U.S. ambassador to Poland, and Piotr Wilczek, Poland’s ambassador to the U.S., just penned a joint op-ed to praise what they called “a high point in bilateral relations.”

This was reinforced in September when President Donald Trump and President Andrzej Duda signed a “Declaration on Polish-American Strategic Partnership.” According to the two ambassadors, it “emphasizes the strong ties and common interests between our countries in the areas of security and defense, energy, trade, and investment, research and innovation.”

As Walesa once said, “I am happy that Poland is returning to the road of pluralism and democracy.”

Working together with our Polish allies, let’s make sure that, over the next 100 years, its star continues to rise.