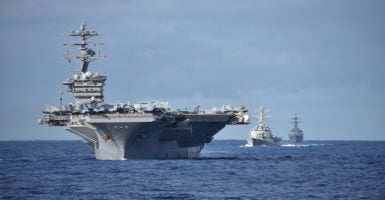 Americans often assume their military is the strongest in the world, capable of handling any threats that come its way. But a new report by the National Defense Strategy Commission challenges that idea. It points out how significantly the U.S. military has deteriorated, placing the U.S. in an increasingly precarious position compared to its potential adversaries.

Congress created the bipartisan commission in July 2017 with national security experts appointed by members from both sides of the aisle. Eric Edelman, former ambassador and undersecretary of defense, and Gary Roughead, retired chief of naval operations, co-chaired it, leading a strong team of experts in defense and national security.

The commission did an admirable job assessing the national defense strategy and the underlying issues that could jeopardize its execution. It assessed areas from the ability of the military to recruit new volunteers to cyber warfare, to the nuclear deterrent.

Unfortunately, in all these areas, the commission found looming problems that need urgent attention.

As The Heritage Foundation has also found in its annual Index of U.S. Military Strength, the nation’s military superiority has “eroded to a dangerous degree.”

Retired Army Lt. Gen. Thomas Spoehr, who also directs The Heritage Foundation’s Center for National Defense, stated that the commission has done “exactly what they were asked to do,” and that the “commission’s candor in providing these assessments is to be commended.” The findings were not watered down to their lowest common denominator the way many bipartisan reports in Washington often are.

Spoehr went on to say, “Hopefully the bipartisan nature of the report will help in the coming months and years persuade a divided Congress of the need to fully resource the nation’s military.”

The national defense strategy is significantly underfunded. Without increased funding, the “damage to American security and influence could be devastating.”

Even before President Donald Trump proposed a 4-5 percent cut to fiscal year 2020 defense funding, the amount of funding proposed for the Department of Defense was insufficient to conduct the necessary rebuilding of the nation’s military.

Collectively, the nation’s military—Army, Navy, Air Force, and Marine Corps—is the smallest it has been since the start of World War II.

The Navy is woefully short of its goal to have 355 ships. To execute the national defense strategy with even moderate risk requires 400 ships. It currently has only 286, and even its most optimistic plans do not get it to its goal of 355 until the 2040s.

The secretary of the Air Force, Heather Wilson, recently announced that her service is significantly short of squadrons to execute the missions it has been given. She has stated that the Air Force needs 386 squadrons—74 more than it has now.

The secretary of the Army, Mark Esper, has stated the Army needs to be above 500,000 active-duty soldiers—roughly 30,000 more than it has today. All these facts corroborate the commission’s conclusion that our military is in deep trouble, to the point that the situation could be considered an “emergency.”

Hopefully, the commission’s diligent work will result in a renewed spirit and willingness to address the challenges faced by our military, and make sure it gets the resources needed to keep us all safe.