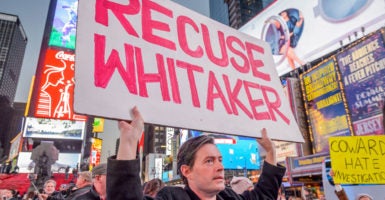 The Department of Justice issued an advisory opinion confirming the legality of Matthew Whitaker’s appointment as acting attorney general Wednesday, as legal authorities across the ideological spectrum suggested the move violated a federal statute and the Constitution.

The memo, prepared by the Office of Legal Counsel, reveals that the Justice Department previously counseled President Donald Trump on the matter and defends the president’s right to designate temporary office holders under the 1998 Vacancies Reform Act and as a matter of history.

“This office has previously advised that the president could designate a senior Department of Justice official, such as Mr. Whitaker, as acting Attorney General, and this memorandum explains the basis for that conclusion,” the opinion reads.

Though the Constitution requires the Senate to confirm all “principal officers,” the Justice Department contends that Congress has always understood the appointments clause does not reach individuals temporarily filling principal offices.

In addition to explaining presidential prerogative to fill vacancies under the Vacancies Reform Act, the Office of Legal Counsel conducted a survey of historic appointments practice and identified some 160 occasions between 1809 and 1860 in which non-Senate confirmed officials filled high offices on a temporary basis, including one instance in 1866 in which a senior DOJ official briefly served as acting attorney general.

“Consistent with our prior opinions and with centuries of historical practice and precedents, we advised that the president’s designation of Mr. Whitaker as acting Attorney General on a temporary basis did not transform his position into a principal office requiring Senate confirmation,” the memo reads.

Assistant Attorney General Steven Engel, who leads the Office of Legal Counsel, is the signatory on Wednesday’s memo.