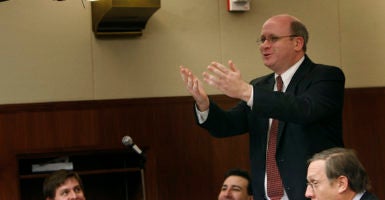 Marc Elias and other members of Al Franken's 2008 legal team salute the work of the Minnesota state canvassing board at the end of Day 4. Franken, a Democrat, wound up defeating Republican incumbent Norm Coleman by 312 votes. (Photo: Elizabeth Flores/Zuma Press/Newscom)

Marc Elias has a history of turning Democrats who lost on election night into winners after recounts.

The lawyer representing Sen. Bill Nelson in the recount of Florida’s contest for Senate has been at the center of nearly every major election controversy for the past decade.

BREAKING: In Florida we have sued in federal court to ensure that every county has a chance to complete the machine and manual recount without facing an unreasonable and arbitrary deadline. #CountAllTheVotes

Elias is chairman of Perkins Coie’s Political Law Group, which was behind the opposition research document that fueled the Trump-Russia investigation. Before that, he was highly instrumental in getting Al Franken into the U.S. Senate.

Nelson, the incumbent Democrat, trails by less than half a percentage point behind Gov. Rick Scott, his Republican challenger. That’s close enough to trigger a recount in Florida, but the deficit of over 10,000 votes is more than than any previous recount has overcome.

Nevertheless, Elias has predicted victory, and he has a winning record at his back in high-profile races.

“I have a pretty good track record on that prediction elsewhere,” Elias told reporters on a conference call last week.

The results of the governor’s race to succeed Scott as Florida governor also qualified for a recount.

Rep. Ron DeSantis, R-Fla., leads Tallahassee Mayor Andrew Gillum, a Democrat, by more than 30,000 votes statewide, though, so the DeSantis win is less likely to be overturned.

Elias, who isn’t involved in the DeSantis-Gillum contest, didn’t respond to The Daily Signal’s request for comment for this report.

Both The Washington Post and CQ Roll Call referred to Elias as the “go-to” lawyer for Democrats. In addition to representing the presidential campaigns of Democrats Hillary Clinton in 2016 and John Kerry in 2004, Elias has represented the Democratic National Committee, the Democratic Governors Association, and former Attorney General Eric Holder’s group, the National Democratic Redistricting Committee.

Here’s a look at high-profile political controversies where Elias played a central role.

In 2008, the U.S. Senate race in Minnesota between Sen. Norm Coleman, the Republican incumbent, and comedian Al Franken, his Democratic opponent, went into overtime with recounts.

Elias represented Franken’s campaign in the litigation surrounding the recount. His biography on the Perkins Coie website boasts that the Coleman-Franken race was “the largest recount and contest in American history.”

Almost 3 million votes were cast in the race.

Franken actually trailed Coleman by 725 votes after Election Day. The incumbent’s lead was slashed by little more than 200 votes after the first canvass.

However, after the recount, things began to change. It dragged on for six months before the final recount showed Franken squeaking by with 312 votes.

Upon Franken’s belated seating in the Senate in July 2009, The Wall Street Journal editorialized:

The unfortunate lesson is that you don’t need to win the vote on Election Day as long as your lawyers are creative enough to have enough new or disqualified ballots counted after the fact. …

Mr. Franken now goes to the Senate having effectively stolen an election.

Economist John Lott was quoted saying that hundreds of votes that came in for Franken was a statistical impossibility.

In 2010, the conservative group Minnesota Majority released an 18-month study that found at least 341 felons illegally voted in the Senate election, easily enough to have made the difference.

Most of those felon votes were cast in the Twin Cities of Minneapolis-St. Paul region, according to the study.

In their book about voter fraud, “Who’s Counting?,” journalist John Fund and Hans von Spakovsky, a senior legal fellow at The  Heritage Foundation, explain the legal process in Minnesota:

So the Democratic strategy focused on how to conduct the recount so that votes could be added to Franken’s total. The Franken legal team swarmed the recount, aggressively demanding that votes that had been disqualified for failing to meet state legal requirements be added to his count, while others be denied to Coleman. The team’s goldmine was the thousands of absentee ballots the Franken team claimed had been mistakenly rejected. …

According to Franken’s lead attorney, Marc Elias, scanners, laptops, and other mobile devices were used to record and keep track of every single disputed ballot in every county in Minnesota. Decisions made by local election boards on each ballot were immediately uploaded to a “cloud” database set up by the campaign so that Elias and his legal team knew exactly what vote totals were for each candidate across the state at every point in time. This gave them a tactical advantage over Coleman’s legal team by providing them with information on when to object or not object in individual ballot disputes.

In 2013, Democrats hoped to gain control of the Virginia attorney general’s office for the first time in two decades.

On election night, Obenshain led Herring by 1,000 votes out of 2.2 million cast. However, a week later, local election boards produced results putting Herring ahead by 164 votes statewide. The state certified the results weeks later, on Nov. 25.

Obenshain initially asked for a recount, but conceded the race before the recount had ended.

Elias was general counsel for Clinton’s 2016 campaign when his firm, Perkins Coie, retained the Washington-based company Fusion GPS to do opposition research.

That resulted in a document written by former British spy Christopher Steele that has become infamous. The unverified, dossier alleged that the Russians might have salacious, compromising information on Donald Trump.

The document also became the basis for the federal investigation into alleged collusion between the Trump presidential campaign and Russian operatives to affect the outcome of the 2016 election.

Special counsel Robert Mueller reportedly is set to issue a report before the end of the year on whether the Trump campaign colluded with Moscow or whether the president obstructed the investigation.

After Trump’s election victory, Elias got involved in a recount he likely didn’t have any hope of winning.

Although Clinton didn’t ask for a recount, Green Party presidential candidate Jill Stein demanded recounts in the states of Michigan, Pennsylvania, and Wisconsin.

In a post on Medium in late November 2016, Elias explained that the Clinton campaign wasn’t initiating a recount, but would assist the Stein campaign.

“Because we had not uncovered any actionable evidence of hacking or outside attempts to alter the voting technology, we had not planned to exercise this option ourselves, but now that a recount has been initiated in Wisconsin, we intend to participate in order to ensure the process proceeds in a manner that is fair to all sides,” Elias wrote, adding:

If Jill Stein follows through as she has promised and pursues recounts in Pennsylvania and Michigan, we will take the same approach in those states as well. We do so fully aware that the number of votes separating Donald Trump and Hillary Clinton in the closest of these states—Michigan—well exceeds the largest margin ever overcome in a recount.

But regardless of the potential to change the outcome in any of the states, we feel it is important, on principle, to ensure our campaign is legally represented in any court proceedings and represented on the ground in order to monitor the recount process itself.

In the end, only Wisconsin had a statewide recount that saw Trump widen his lead over Clinton, by 131 votes.

Elias represented Cooper in the recount process. In this case, he didn’t reverse fortunes for his client, as the Democratic challenger maintained his lead.

McCrory’s campaign filed complaints with the State Board of Elections alleging voter irregularities in 50 of North Carolina’s 100 counties.

However, the state Republican Party narrowed its focus to Durham County, with a request for recounting 90,000 ballots cast there. After the recount was complete, McCrory conceded defeat to Cooper.

But Elias was on the team that represented Democrat Maria Cantwell in her defeat of Sen. Slade Gorton, a Republican, in Washington state.

Out of nearly 2.5 million votes case, Cantwell emerged the winner with 2,200 votes. A Libertarian candidate won 64,000 votes that year.