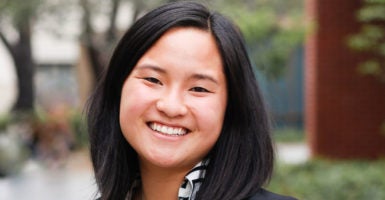 “I didn't expect that a place that claimed to be so inclusive and tolerant would turn its back on me so quickly,” Isabella Chow says. (Photo courtesy of Isabella Chow)

A 20-year-old student senator at the University of California Berkeley says she didn’t expect the intense opposition she received for voicing her Christian beliefs on sexual identity and gender.

Although Isabella Chow, a junior, has the support of the school’s College Republicans chapter, her own student party cut ties with her and other students and organizations are demanding that she resign from the Senate or face a recall.

“I didn’t expect it at all, I’ll just put it that way,” Chow told The Daily Signal in a phone interview Tuesday.

Her offense? Chow chose not to vote Oct. 31 on a measure decrying consideration by the Trump administration of a legal definition that says a person’s gender is what his or her sex was at birth. She was the only one of 20 senators to abstain on the measure, which also backed organizations that promote the LGBT agenda.

Student-run CalTV and school publications Chow represented also abandoned or “disaffiliated with” her, she said.

In a statement on Facebook explaining why she abstained, Chow first said discrimination “is never, ever OK.”

But, she said, “where this bill crosses the line for me is that I am asked to promote a choice of identities that I do not agree with to be right or best for an individual, and to promote certain organizations that uphold values contrary to those of my community.”

Chow, who is from Gilroy, California, about two hours outside of San Francisco, told The Daily Signal that she fears funding for Christian groups on campus is threatened. A piano recital where she was supposed to play was cancelled because professors said, “You can’t perform when we are all afraid of protesters showing up at the door.”

At a protest Wednesday, Chow said, people yelled at her for three hours, swearing and demanding that she resign.

Through that experience, she told The Daily Signal, “a big part of me was reminded that as a Christian, I needed to stand by what I said.”

That means not only standing by her beliefs about gender and sexuality, she said, but “loving the LGBTQ community and accepting all of them as valid and significant and loved.”

Chow was elected to the student Senate as a candidate running with the party Associated Students of the University of California. She had support from fellow Christian students and the “publications and media” crowd involved in journals, magazines, and CalTV, the San Francisco Chronicle reported.

Over 1,000 persons have signed a petition demanding that Chow resign from student government or face a recall. She also has faced pushback on social media.

Lol I haven’t been posting on Facebook often at all this semester… but I finally broke my silence on Isabella chow’s bigot ass … and it feels so… good….

Matt Ronnau, president of the Berkeley College Republicans, told The Daily Signal in an interview that his organization stands by Chow.

“She expressed very clearly … and decided to abstain, and then the Queer Alliance Resource Center [an LGBT rights organization] came out and basically said she was attacking them and really muddied what she said up,” he said.

The group “painted her to be this huge evil person when really she’s not,” Ronnau said.

Harini Shyamsundar, editor-in-chief and president of The Daily Californian, UC Berkeley’s student newspaper, told The Daily Signal in an email that the paper declined to publish an op-ed by Chow explaining her decision to abstain because it “did not meet the paper’s editorial standards.”

“We could not publish it in our opinion section, even opposite our own editorial,” Shyamsundar said.

Shyamsundar did not explain further, including what she meant by failure to meet editorial standards.

Manu Meel, CEO of BridgeUSA, a nonpartisan student club at UC Berkeley, told The Daily Signal in an email that while he and the organization did not support Chow’s stance, her opinions should still be respected.

Rather than silencing her perspective, we must constructively engage her perspective and create the necessary spaces for those discussions to occur on campus. A democracy cannot thrive if we silence individuals that we disagree with, even if those disagreements are based on identity. In a democracy, progress is achieved when consensus can be forged because ultimately, we are one people united by a common commitment to advancing and protecting the rights of all citizens.

Meel also said students should focus on having a productive discussion about differing viewpoints.

“As students on a campus that has a legacy of strengthening democracy, we can set an example for how difficult issues like the one being discussed here should be resolved,” Meel said. “We must take the opportunity to resolve our differences at a time when polarization and partisanship define the political landscape.”

Ryan T. Anderson, a senior research fellow in American principles and public policy at The Heritage Foundation, told The Daily Signal in an email that opinions based on scientific fact should not be seen as hateful or bigoted.

“The best biology, psychology, and philosophy all support an understanding of sex as a bodily reality and of gender as a social manifestation of bodily sex. Biology isn’t bigotry,” said Anderson, author of the book “When Harry Became Sally: Responding to the Transgender Moment.”

“How absurd that a student has become a social outcast simply because she declined to support the manifest falsehoods of transgender ideology,” he said.