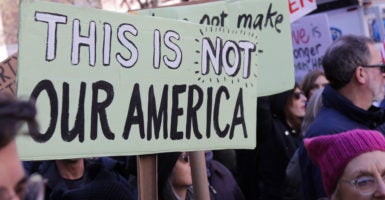 Sometimes progressives do a great job of becoming caricatures of themselves.

The progressive worldview is marked by a tendency to embrace utopian dreams, and a general disregard for tried and true traditions and institutions.

Ted Kennedy captured this instinct in 1968 when he said, quoting George Bernard Shaw: “Some men see things as they are and say, why; I dream things that never were and say, why not.”

But while laws and norms sometimes need to be changed, there is something to be said for recklessly overturning a system that has been at the heart of the strongest and freest country that’s ever existed.

This progressive instinct for change at any cost has gone off the rails.

When President Donald Trump defeated Hillary Clinton in 2016, the left wanted to abolish the Electoral College.

Now that Kavanaugh is on the court and Democrats control the House, the left wants to get rid of the Senate, which remains in Republican hands.

Most of the criticism of these institutions is that they aren’t “democratic” enough. But, of course, they were not designed to be democratic. The Founders didn’t believe a purely democratic system would be the best preserver of our natural rights, or even a strong country.

In most of these cases, the left-wing narrative is that the system is “rigged” against them.

The US has a progressive majority that's being held captive by the unrepresentative institutions we inherited.

Democrats will win the popular vote for the Senate tonight, but lose seats. It makes no sense to apportion political power by land mass, instead of by person. pic.twitter.com/zXCDBYohEs

Progressives are coming up with increasingly absurd “evidence” to prove this—despite the fact that it seemed to work just fine as recently as 2008 when Democrats controlled every branch of the federal government.

They’ve embraced the same line of argument they used against the Electoral College, coming up with a Senate popular vote stat, which the left believes would favor Democrats.

Besides the absurdity of throwing the composition of the Senate to a mass popular vote, this idea upends the idea of representation to begin with.

Even The Washington Post threw water on this hot take, calling the Senate popular vote stat “bogus” for a host of reasons.

“The biggest problem with it is that not every state is up for reelection, leading to a skewed picture,” wrote the Post’s Aaron Blake. “If more Democratic seats are up for reelection, it stands to reason that Democrats will do well in the popular vote. And that’s exactly what happened in 2018: Democrats were defending 26 states, and Republicans just nine.”

On top of this, California, the most populous state in the union, didn’t even have a Republican senator up for election due to its peculiar primary system. Millions of votes that would have likely went to a Republican instead went to a Democrat.

Nevertheless, progressives insist that we shake the system to its core because it’s all so unfair to them.

Ezra Klein of Vox actually argued that taking a hatchet to these constitutional institutions will add legitimacy to the system.

“American politics is edging into an era of crisis,” Klein wrote. “A constitutional system built to calm the tensions of America’s founding era is distorting the political competition between parties, making the country both less democratic and less Democratic.”

To restore legitimacy now that Democrats have lost some elections, Klein suggests that progressives could cross the Rubicon and begin “pushing the system to a breaking point.”

Does that sound like a good way to promote legitimacy and stability to a republic?

Ultimately, Klein’s argument to upend American government based on its unfairness to progressives is thin gruel at best.

But it isn’t the thinnest of gruel.

The award for that distinction goes to Joy Behar, co-host of “The View,” who rolled incorrectly on the progressive roulette wheel of things to blame for electoral defeats.

Behar hilariously said on the show that the reason Republicans do well in Senate races is that they gerrymander districts to make them more favorable to the GOP.

This is complete nonsense given the fact that Senate races are statewide. There are no districts to redraw.

Whether it’s the nonfactual nonsense of Behar or the pseudo-sophisticated sophistry of Vox.com, temporary political frustrations are a poor reason to upend the American system of governance that has been a miraculous blessing for the American people for over two centuries.

These “reforms” should be seen for what they are: naked power grabs by people who have no respect for the Constitution.

They make it particularly hard to believe that they’re somehow trying to save the country from Trump breaking constitutional norms, when they are perfectly fine breaking any norm at all when it suits them.

Perhaps instead of trying to game the system created by the Founders, which they have so little understanding of and respect for, progressives can try to work within our constitutional system to convince Americans that their ideas are actually the best ideas.

Therein, of course, lies the problem.