69-Year-Old Man Identifies as 49, Asks Court to Change His Age 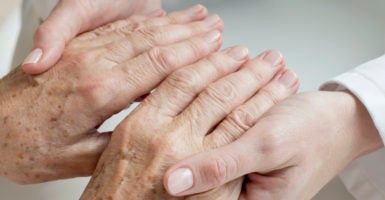 Many have become familiar with the idea of "gender fluidity," but what about identifying as a younger age? Emile Ratelband is asking a court to change his birth certificate to make him legally 20 years younger because he doesn't feel 69 years old. (Photo: Science Photo Library/Newscom)

A Dutch self-help guru is breaking new ground by claiming age is just as fluid as gender—and he isn’t worried about offending the transgender community.

Emile Ratelband of Arnhem, southeast of Amsterdam, is asking a court in his hometown to change his age legally from 69 to 49 because he feels like he is in his 40s, The Washington Post reported.

Judges heard his case Monday and promised to hand down a verdict in coming weeks.

If Ratelband’s request is granted, the court will allow alteration of his birth certificate to say he was born on March 11, 1969, rather than March 11, 1949.

Ratelband told the Post that his request is no different than requests to change one’s name or gender assigned at birth.

Ratelband said the age change could make him more successful in the dating and job markets—where youth and relatability to young people are a plus—without the hassle of lying.

“If you lie, you have to remember everything you say,” he told the Post.

He is also a former baker and political provocateur. He created a political party bearing his own name and attempted to capitalize on anti-immigration candidate Pim Fortuyn’s May 2002 assassination, the Post reported in January 2003.

Ratelband previously asked his hometown for permission to name his twin children Rolls and Royce. Officials at town hall refused this request, as well as his recent attempt to change his age.

This time around, however, Ratelband took the matter to court.

Ratelband, adopting the process many transgender persons take on when seeking identity changes, said he saw several professionals for psychological evaluation. He told the Post that he was able to convince them that he was not, as he called it, the “victim of the Peter Pan syndrome.”

The American Medical Association adopted a resolution in 2017 supporting the right of transgender persons to use basic human services and public facilities in line with their gender identity. The resolution claims gender is “incompletely understood as a binary selection.”

Ratelband told the Post that the court seemed interested in his argument that his efforts are about the freedom to live as one wants in a modern society.

Ratelband characterizes his commitment to redefine himself as “American thinking,” which he attributes to the time he spent training under and traveling with Tony Robbins, an American entrepreneur and life coach. He also said President Donald Trump embodies Americans’ refusal to let conventions dictate what they do.