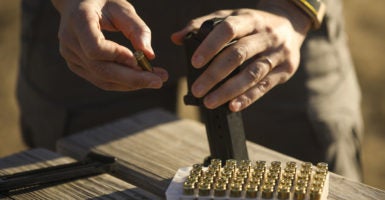 Washington voters approved a ballot initiative on Tuesday that will raise the age to purchase semi-automatic rifles from 18 to 21 and impose a 10-day waiting period to purchase the firearms.

According to the Seattle Times, Ballot Initiative 1639, or I-1639, passed with just over 60 percent of the vote at the time of reporting.

The measure also requires Washington’s firearms licensing agency to begin developing a program to conduct annual verifications to ensure that gun purchasers covered by the new law remain eligible to possess the firearms.

In addition to the age increase, gun purchasers must also pass enhanced background checks while providing proof that they have taken a firearms training course. Purchasers must also wait 10 business days before obtaining their purchased firearm.

Tuesday’s vote tracked closely with a poll conducted last month showing strong support for the measure. Fifty-nine percent of registered voters polled by Crosscut/Elway said they supported I-1639 and 34 percent opposed the initiative.

I-1639 ended up on the ballot through the efforts of the Alliance for Gun Responsibility, a group that fights for stricter gun regulations. The Washington initiative is the third that the organization has gotten onto state ballots.

After a challenge from gun rights groups like the National Rifle Association, the Washington Supreme Court on Aug. 24 reversed a lower court’s ruling, allowing the initiative to remain on the ballot.

A group called Safe Schools, Safe Communities poured $5.5 million into the campaign supporting I-1639, according to the Seattle Times. Paul Allen, the late co-founder of Microsoft, contributed more than $1.2 million to the campaign. Former Microsoft CEO Steve Ballmer and his wife contributed $1 million.

“This measure treats all gun owners, especially young adults, like criminal suspects,” Citizens Committee for the Right to Keep and Bear Arms Chairman Alan Gotlieb has said. “In short, Washington prides itself for being against discrimination, except when it comes to gun ownership. Then principle is sacrificed for political correctness, and social prejudice becomes acceptable.”

The NRA’s Institute for Legislative Action called on voters to reject the initiative, which the gun rights group asserted would impose “draconian measures” on gun owners.