McConnell Says Confirming Judges Will Be His ‘Top Priority’ 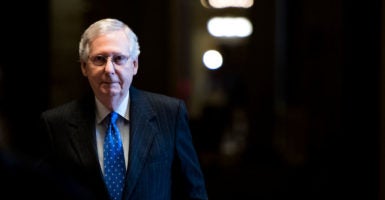 “The president, I think, has done an excellent job in picking young men and women who believe the job of the judge is to follow the law,” Senate Majority Leader Mitch McConnell, R-Ky., says. (Photo: Bill Clark/CQ Roll Call/Newscom)

Senate Majority Leader Mitch McConnell, R-Ky., says his “top priority” for the rest of the year and into the new Congress is filling the judiciary with President Donald Trump’s judicial nominees.

“The president, I think, has done an excellent job in picking young men and women who believe the job of the judge is to follow the law and we intend to keep confirming as many as we possibly can as long as we are in a position to do it,” McConnell said Wednesday at a press conference.

“It’ll still be my top priority in setting the agenda here in the Senate,” McConnell said.

McConnell also said that the Senate has been successful in making two Supreme Court appointments and 29 circuit judges, adding that, “we’re not through doing those this year.”

While not all Senate races are settled, Republicans are poised to pick up two seats in the Senate.

John G. Malcolm, vice president of the Institute for Constitutional Government and director of the Edwin Meese III Center for Legal and Judicial Studies at The Heritage Foundation, told The Daily Signal in an email that McConnell is correct to set his sights on judicial confirmations.

“With the Republicans increasing their majority in the Senate, President Trump—ably assisted by Sen. McConnell and the Senate Judiciary Committee—will be in a position to continue appointing constitutionalist judges to the federal bench, building upon his remarkable success over the first two years of his administration,” Malcolm said, adding:

President Trump appointed a record number of highly-qualified judges to the federal courts of appeal. His judicial appointments are, perhaps, his most significant achievement to date and may well be the most enduring legacy of his administration.

Carrie Severino, general counsel and policy director for the Judicial Crisis Network, told The Daily Signal in an email that continuing to focus on the judiciary will benefit the Republican agenda.

“Leader McConnell has done amazing work in helping confirm historic numbers of circuit judges during Trump’s first two years in office,” Severino said. “I look forward to continued progress on judicial confirmations—as Leader McConnell indicated, they aren’t through yet. Just like in 2016, judges were a major factor in … Republican victories.”