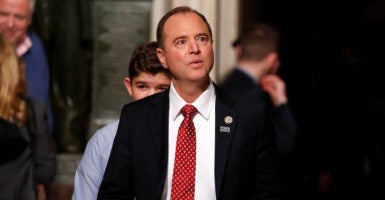 Rep. Adam Schiff, D-Calif., is the ranking member of the House Intelligence Committee, but could become its chairman. (Photo: Joshua Roberts/Reuters/Newscom)

With Democrats taking control of the House, Rep. Adam Schiff is likely to assume the chairmanship of the House Intelligence Committee in the next session of Congress.

Schiff, D-Calif., currently the ranking member of the committee, would likely seize the opportunity to restart and widen the scope of the panel’s investigation of alleged collusion between President Donald Trump’s 2016 election campaign and Russian operatives.

Formally known as the House Permanent Select Committee on Intelligence, it is currently chaired by Rep. Devin Nunes, R-Calif.

Schiff has served on the Intelligence Committee since 2015, when he was appointed to it by House Minority Leader Nancy Pelosi, a fellow California Democrat.

Republicans concluded the panel’s investigation in March, after finding no evidence of collusion between Trump’s campaign and Russia. The move angered Democrats.

THE HOUSE INTELLIGENCE COMMITTEE HAS, AFTER A 14 MONTH LONG IN-DEPTH INVESTIGATION, FOUND NO EVIDENCE OF COLLUSION OR COORDINATION BETWEEN THE TRUMP CAMPAIGN AND RUSSIA TO INFLUENCE THE 2016 PRESIDENTIAL ELECTION.

At the time, Schiff released a statement:

While the [Republican] majority members of our committee have indicated for some time that they have been under great pressure to end the investigation, it is nonetheless another tragic milestone for this Congress, and represents yet another capitulation to the executive branch.

By ending its oversight role in the only authorized investigation in the House, the Majority has placed the interests of protecting the President over protecting the country, and history will judge its actions harshly.

Should Schiff ascend to the committee’s chairmanship, he has made it clear in recent statements that reviving the Russian collusion investigation will be at the top of his agenda.

He specifically wants to look at any potential financial leverage the Russians could have over Trump.

“The president has sought to keep that off limits, but if that’s the leverage Russians pose, that’s a real threat to our country,” Schiff told the Los Angeles Times on Monday.

Sending troops to the border as a political stunt. Promising to amend the constitution by executive order. Stoking bigotry after a mass shooting motivated by bigotry.

I said Trump was the worst President in modern history and I was wrong — when I said modern.

Schiff on Monday referred to Trump as a “deeply unethical man in the Oval Office” and accused Congress of being “deeply complicit in what he is doing.”