7 of Pelosi’s Priorities as Democrats Take Back the House 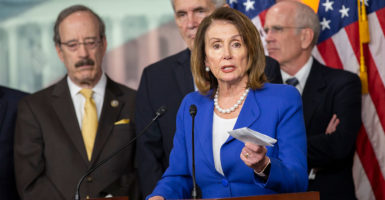 Democrats’ success Tuesday in retaking the House majority appeared to put Nancy Pelosi of California at the top of a short list for the speakership.

Pelosi has listed top priorities she hoped to tackle with a new Democratic House majority next year, in addition to what Republicans expect to be attempts to roll back last year’s GOP tax reform package, block planned new tax cuts for the middle class, and resist more cuts in government spending.

“Democrats pledge a Congress that works for the people—for the people,” Pelosi said late Tuesday night in Washington. “Lower the cost of health care by lowering the cost of prescription drugs, raise workers’ wages with strong economic growth by rebuilding the infrastructure of America, clean up corruption to make Washington work for all Americans.”

“In stark contrast to the GOP Congress, the Democratic Congress will be led with transparency and openness,” she said.

As of 1:30 a.m. Wednesday, with results still being counted, Democrats had gained three more seats than the 23 they needed to regain control of the House for the first time since 2010. (In the Senate, Republicans had picked up four seats—in Florida, Indiana, Missouri, and North Dakota—to increase their majority.)

Here’s a look at what Americans might expect if Pelosi, who was House speaker from 2007 through 2010, regains the top leadership post:

Democrats will have the power to conduct congressional oversight when they take over the House in January, opening the door to a wide range of investigations of President Donald Trump’s administration.

While some Democrats such as Rep. Maxine Waters, D-Calif., have argued for the impeachment of the president, Pelosi has resisted the idea. As House minority leader, she called the word “impeachment” divisive at a mid-October talk at Harvard’s Institute of Politics, the Associated Press reported.

Instead, Pelosi told students at the gathering that a Democratic majority would use House committees to conduct additional oversight of the Trump administration and preserve all documents related to special counsel Robert Mueller’s investigation of Trump’s connections with Russia, for congressional follow-up.

Pelosi also made it clear to the Harvard students that campaign finance reform was at the top of Democrats’ agenda.

In an interview with Politico, she said a campaign finance reform package would be the first bill proposed in a new Democrat-controlled Congress.

“People believe you that if you want to reduce the goal of money in politics … then they trust you to do the right thing,” Pelosi said in the interview.

The package could include a ban on gerrymandering of congressional districts, expanded mandates to disclose political donors, and restoration of select enforcement provisions in the Voting Rights Act, The New York Times reported.

Pelosi and other top Democrats made clear in the weeks leading up to Election Day that they intended to pass the Equality Act,  a proposal last year with more than 200 sponsors.

The proposed law would explicitly add protections for women and for lesbian, gay, bisexual, and transgender individuals to the existing Civil Rights Act of 1964 that prohibits discrimination based on race, color, sex, religion, and ancestry.

Pelosi said during her talk at Harvard that the bill was a personal goal of hers and would be one of the new Democratic chamber’s top 10 priorities, given a bill number between 1 and 10.

Democrats downplayed the importance of the “caravan” of more than 5,000 persons from Central American countries, according to most estimates, that is headed for the U.S.-Mexican border.

In her speech at Harvard, Pelosi told students that Trump’s promised border wall was a “manhood issue” that would not see light in a Democratic chamber. She added that providing a path to legal status for the Dreamers would be the priority regarding immigration.

The Washington Post reported that one student asked whether Pelosi would be willing to trade anything in exchange for funding Trump’s border wall. She immediately shut down the idea.

“Nothing,” Pelosi replied, according to the Post. “It’s immoral, expensive, ineffective, and not something people do between countries. … In any event, it happens to be like a manhood issue for the president, and I’m not interested in that.”

Pelosi has been at the center of the gun debate for much of the past decade, pushing for stricter gun laws in the aftermath of every major shooting.

After the shooting at Marjory Stoneman Douglas High School in Parkland, Florida, where a gunman killed 17 in February, Pelosi said at a press conference that she would rather pass new gun controls than win the House majority.

“I’d rather pass gun safety legislation than win the election,” she told reporters on Capitol Hill the day after the shooting.

Pelosi highlighted a gun background check bill to Politico as an opportunity to work with Republicans, many of whom supported such laws in the past.

She told students at Harvard that gun control legislation would be a top priority for a Democratic-controlled House.

Pelosi has said to expect measures from Democrats to lower health care and prescription drug costs, already a much-publicized priority of the Trump administration.

Pelosi and other Democratic leaders have said that if they controlled the House they would seek to improve the Affordable Care Act, popularly known as Obamacare, rather than replace it.

They appeared to take a single-payer health care plan off the table, though some Democrats prefer it.

Democrats and Republicans alike have pledged to pass legislation to repair the nation’s infrastructure, and Pelosi has highlighted infrastructure as an area ripe for bipartisanship in the now-divided government.

The difference between the two parties on the issue, however, is a common point of contention between Democrats and Republicans, including how much to spend.

Democrats have prepared more liberal approaches, proposing detailed plans in a $1 trillion infrastructure package resisted by Republicans who are concerned about federal spending and looming deficits.

Pelosi has made passing an infrastructure bill a top priority in a Democratic-controlled House.