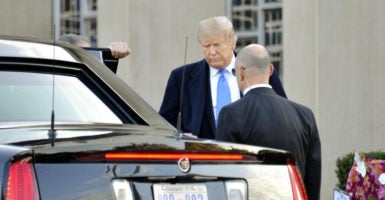 President Donald Trump and first lady Melania Trump, in a visit Tuesday, placed a white flower and small stone on each of 11 stars set up in the memory of those murdered at a synagogue in Pittsburgh.

The Trumps also lighted candles in honor of each man and woman killed Saturday inside the Tree of Life synagogue in the Squirrel Hill neighborhood.

WATCH: President Donald Trump and First Lady Melania Trump laid stones from the White House and white roses at a memorial for the 11 people killed in Saturday’s shooting at the Tree of Life Synagogue in Pittsburgh – KDKApic.twitter.com/Vvv86JzySO

They met with Rabbi Jeffrey Myers, who leads the congregation. But amid the tragedy, the visit didn’t bridge all political divides.

Protesters held signs such as “We didn’t invite you here” and “Trump [hearts] Nazis,” according to reports from the White House press pool.

Others held up a middle finger or gave a thumbs-down. Other protesters shouted, “Words have meaning” and “No more hate.”

The president and first lady were at the Tree of Life synagogue for about 20 minutes, along with White House advisers Ivanka Trump, the president’s eldest daughter, and Jared Kushner, his son-in-law. Both are Jewish.

Today, I traveled with the President, First Lady, Secretary Mnuchin and my husband Jared to Pittsburgh to pay our respects at The Tree of Life synagogue and visit with first responders.
We saw firsthand a community that has suffered the unimaginable but remains united and strong.

The first family later visited University of Pittsburgh Medical Center Presbyterian hospital, where several of the six wounded by the gunman in the attack were brought.

Robert Bowers, 46, of Baldwin, Pennsylvania, who surrendered to police, is accused of shooting and killing 11 worshipers in what authorities call the deadliest attack on Jews in U.S. history. The charges against him include federal hate crimes.