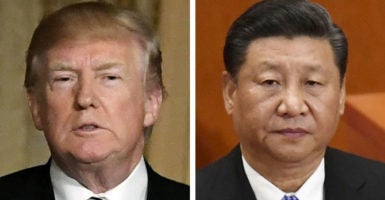 President Donald Trump will reportedly place new taxes on $257 billion of imports from China if he doesn’t walk away satisfied from his meeting with Chinese President Xi Jinping at the end of November. (Photo: Kyodo/Newscom)

A recent report may shed some light on the next round of the U.S.-China trade war.

According to Bloomberg, President Donald Trump will place new taxes on $257 billion of imports from China if he doesn’t walk away satisfied from his meeting with Chinese President Xi Jinping at the end of November.

However, that contradicts a report last week that the presidents may not even talk trade if China can’t come up with plans for meaningful reform before their meeting at the Group of 20 summit in Argentina.

Yet, it wouldn’t be surprising if both stories were true. Since the launching of the trade war over a year ago, American and Chinese observers alike have called into question whether the White House has a strategy in trade negotiations with China.

There remains the question of who’s leading the White House’s China policy.

Now, reports also point to a list of 142 demands Washington wants from Beijing—a considerable increase from its list of demands in May.

Officials in Beijing have noted they could address roughly 40 percent of those demands in a time frame that Washington would find agreeable. Another 40 percent would have to be addressed over the medium- to long-term and reforms of the final 20 percent would be unacceptable.

While it’s unlikely the two presidents could finalize any deal by the time they meet, it is possible that Xi could make credible commitments on key issues and that the two could enter into a deal to negotiate the details—and that during the negotiating process, no new tariffs, or taxes, would be placed on the other.

If the two presidents do agree on this basis, that still leaves unanswered the question of who will lead the U.S. side of the follow-on consultations.

If it’s Trade Representative Robert Lighthizer, will he have enough time to talk to China in between negotiating new trade deals with Japan, the United Kingdom, and the European Union?

While Washington and Beijing continue to hash out their differences over the next couple of months, it’s not just consumers and businesses in America that are feeling the cost of tariffs.

A recent survey of American businesses in China highlights the impact tariffs have on their business decisions.

The initial round of tariffs on $50 billion worth of imports from China negatively affected roughly 63.6 percent of the 432 American businesses surveyed. Some 29.9 percent said they were unaffected, while 5.1 percent were unsure. Only 1.4 percent saw a positive impact.

The number of those negatively affected grew, and those positively affected fell, when estimating the impact of the second round of tariffs on $200 billion worth of imports that went into force in September.

And while Beijing has not been able to counter U.S. tariffs dollar for dollar, as expected, they make up the difference in qualitative measures. Over half of the respondents noticed an increase in non-tariff barriers. Those take the form of increased inspections, slower customs, and other regulatory and bureaucratic measures.

Those costs have significantly affected manufacturing businesses the most. While there has been an increase in the demand for products—increasing orders before the next round of tariffs—companies are seeing a reduction in both profit and revenue.

The most marked effect is a change in supply chain. Thirty percent of companies are considering sourcing parts of their supply chain out of either the U.S. or China.

Unlike what the White House might want, U.S. manufacturing in China isn’t coming back to the U.S.

Sixty-five percent of American companies have no plans to relocate out of China. Of those who are even considering moving, most are considering Southeast Asia. Only 6 percent have already moved back or plan to move back to the U.S. because of the trade war.

Possibly the largest unseen negative effect these tariffs have had on U.S. businesses is the uncertainty of the current economic climate. Questions over the future of U.S.-China trade relations have led 31 percent of respondents to delay or cancel investments.

For consumers and businesses, in and outside of America, the trade war is more than just rhetoric. Tariffs have already led to real costs for these individuals.

Justin Tran is a member of the Young Leaders Program at The Heritage Foundation.