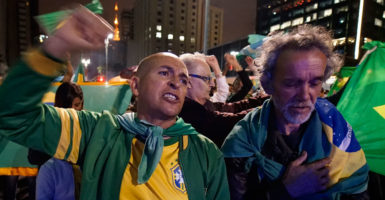 Jair Bolsonaro’s blowout election victory Sunday in Brazil is a hugely positive development and represents a watershed moment not only for Brazil, but also for Latin America and for U.S.-Brazil relations.

For the first time in more than two decades, Brazilians can hope for greater economic freedom.

Bolsonaro’s portrayal by left-leaning mainstream media outlets as a reactionary, right-wing populist is incorrect and misleading. The term “populist” is more appropriately applied to the tactics and policies of the left-wing Partido dos Trabalhadores (Workers’ Party) candidate that he defeated.

Bolsonaro, 63, is one of the few politicians on the national stage in Brazil who wasn’t tainted by the rampant corruption and cronyism in both the public and private sectors of Brazil that flourished during the Workers’ Party years (2003-2016).

It was that corruption and self-dealing that outraged voters and gave Bolsonaro 55.1 percent of the vote, trouncing his Workers’ Party opponent, Fernando Haddad.

The president-elect, of the Social Liberal Party, is better viewed as a center-right traditionalist and conservative who has promised to restore economic freedom and individual liberty in Brazil, to fight against corruption, and to “Make Brazil Great,” in the tradition of President Donald Trump—who Bolsonaro praised publicly during his campaign and whom he seeks to emulate as the next president of Brazil.

Bolsonaro, who takes office Jan. 1, will not return to the nationalistic and import-substitution policies of the Brazilian military dictatorship years (1964-1985).

His likely finance minister, investment banker Paulo Guedes, has a Ph.D. from the free market-promoting University of Chicago. Guedes has stated that he favors privatizing all Brazilian state-owned enterprises.

Bolsonaro has stopped just short of that, ruling out privatizing Petrobras, the state-owned Brazilian petroleum giant. But he has stated his willingness to look at privatizing some of the upstream and downstream subsidiaries of Petrobras, as well as many other state-owned enterprises.

Bolsonaro received intense support from evangelical Christians, the fastest-growing religious segment in Brazil, who were angry—along with many other Brazilians—at the Workers’ Party’s leftist populism that resulted in massive corruption and debt.

Bolsonaro has said he wants to lead not only an economic rebirth to restore market-driven democracy, but also a moral renewal in Brazil, a country that is on track this year to record 64,000 homicides—the highest number in the world.

Bolsonaro is pro-USA and pro-Israel, and shares Trump’s suspicions about China under Chinese President Xi Jinping. He sees clearly that a nontransparent deal under China’s “One Belt, One Road” program could be a very bad one for Brazil, as numerous other countries around the world have already learned to their regret.

Notable examples of China’s “One Belt, One Road” debt-trap diplomacy include countries such as Sri Lanka, which took on too much debt from China for the construction of infrastructure by Chinese workers, only to fall behind in its payments and have its geostrategically important port at Hambantota seized by China.

The next Brazilian president is also likely to be much more open than previous leftist presidents, such as Luiz Inacio “Lula” da Silva and Dilma Rousseff, to negotiate a trade and investment deal with the United States.

In fact, Lula blocked the possibility of such an agreement when it was proposed by then-President George W. Bush at a summit meeting in Mar del Plata, Argentina, in 2005.

The election of Bolsonaro is an excellent signal for greater economic freedom in the rest of South America, too, and completes the shift to the right that has already happened in Argentina, Chile, Colombia, and even in Ecuador under President Lenin Moreno.

Hopefully, Bolsonaro will lead a regional effort to confront the brutal, Cuban-backed Maduro dictatorship in Venezuela, where millions are suffering from economic mismanagement in a country with huge oil reserves.

Opening up Brazil to international trade and investment, re-establishing the rule of law, and curtailing the high levels of protectionism and cronyism in Brazil would help to raise Brazil’s scores in the annual Heritage Foundation Index of Economic Freedom.

Bolsonaro will have to undertake fundamental reforms, not just to achieve the long-term growth associated with increasing economic freedom, but also to break the destructive “boom-or-bust” pattern that has emerged in recent years of crisis-mode governance.

These reforms were outlined and analyzed in detail in an extensive Heritage report earlier this year.

For decades, many pundits have said that “Brazil is the country of the future, and always will be.”

For a few years in the 1990s, it appeared that Brazil might escape its fate through the courageous reforms implemented by former center-left President Fernando Henrique Cardoso.

Regrettably, the fiscal stability Cardoso achieved was squandered by Lula and Rousseff during the Workers’ Party years while Brazil was the beneficiary of the commodity boom and could have more easily afforded the high political cost of implementing reforms.

There was little hope during the 2018 campaign, however, that Haddad, 55, a former mayor of Sao Paulo, would do things differently if his party had returned to power.

Voters have given Bolsonaro the chance to “Make Brazil Great.”  To succeed, he will have to forge alliances with the business sector and with the roughly two dozen political parties in Brazil’s Congress.

This is Bolsonaro’s—and the country’s—moment to implement the tough reforms Brazil needs to realize the great potential it has always possessed.