$1,280 Per Coffee Cup Is a Bad Look. Here Are Some Changes the Military Should Make. 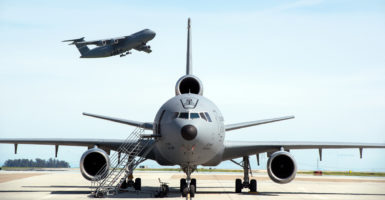 The Air Force recently came under scrutiny for spending $1,280 apiece on hot cups.

The cups have become a symbol of two facts that shape our military: The military needs to be a good steward of taxpayer dollars, and an older military leads to increased costs.

The cups in question were being used in KC-10 aerial tankers. They have a reputation for having fragile handles that don’t survive many falls, and currently, once the handle is broken the whole cup needs to be replaced.

In the cup’s defense, it can heat all sorts of liquids, from coffee to soup. It is of great use. But it has also come at great cost. This is but the latest example of government procurement that defies common sense.

To the Air Force’s credit, it was the squadron that flies the aircraft that raised the issue and sought alternative solutions.

Sen. Chuck Grassley, R-Iowa, picked up on the issue, writing to the secretary of the Air Force on Oct. 2 demanding an explanation for the high-cost coffee cups and their recent rise in price. In the last two years, the cups rose in price from a reported $693 to $1,280. (Of course, $693 is already too much to spend on a cup.)

Fifteen days later, Secretary Heather Wilson responded to the senator’s query pointing out that the Air Force is currently seeking out ways to manufacture a part that is no longer under production.

Every material or part that goes into a military aircraft needs to be tested for how it interacts with all the other components. Replacement parts need to be manufactured to meet those previously tested specifications. If the replacement part is no longer under production because the aircraft is simply too old, the costs raise substantially.

Many replacement parts for the Air Force’s current fleet are no longer in production and thus require expensive one-off processes to be reproduced. It’s why the Air Force’s goal is to create its own solution through additive manufacturing.

Older planes, like older cars, are harder to maintain, and the sheer rarity of the replacement parts drive the price up.

This is the case for most of the airplanes operated by the Air Force. The average airplane lifespan for the Air Force fleet is about 28 years. The sheer age of many of these planes has considerable impacts on their availability and reliability, as The Heritage Foundation’s Index of U.S. Military Strength points out.

All of these challenges explain the high cost of the hot cups, but they do not justify or make it acceptable. The Air Force and the entire Department of Defense should be constantly working on ways to reduce the cost of spare parts. It is a considerable portion of what makes operating military platforms expensive to operate.

Furthermore, the Pentagon needs to continue looking for ways to be more efficient, effective, and a better steward of taxpayers’ dollars. It needs to use commercial sources for parts as much as possible and introduce more flexibility in its contracting practices. These reforms have been championed by the current chairman of the House Armed Services Committee, Mac Thornberry, R-Texas.

Additionally, the Pentagon needs to continue exploring ways of rationalizing its business operations, from reducing its infrastructure footprint to auditing its accounts in a cost-effective manner. All these efforts would not only create value for the taxpayers, they would also benefit the military itself.

The $1,280 coffee cup is microcosm of some of the problems our military faces. Our military relies on older platforms that require more resources to stay ready, which takes away from the resources that would be used to replace those platforms, creating a negative cycle of deteriorated readiness.

It will require sustained investment to replace our aging fleet and to maintain it over time, and to make sure our current fleet remains ready in the meantime. This means the Pentagon will have to both improve the way it uses its resources, and invest in modernizing its fleet.