Before Jim Jones’ Followers Drank the Kool-Aid, San Francisco Did 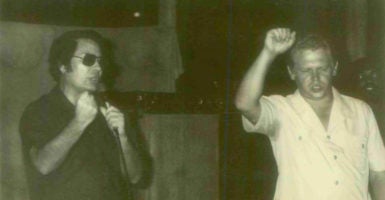 Forty years ago this November, the Reverend Jim Jones orchestrated the murders and suicides of 918 people at his jungle commune, Jonestown. It marked the largest loss of civilian life in American history until 9/11. Since the Jonestown massacre, the phrase “drinking the Kool-Aid” has become a popular term for blind trust in bizarre or dangerous ideas.

But before the people of Jonestown drank Jim Jones’s Kool-Aid, powerful liberals in San Francisco did, as Daniel J. Flynn shows in this excerpt from his new book, “Cult City: Jim Jones, Harvey Milk, and 10 Days That Shook San Francisco.”

“I am the Supervisor for District Five in the City of San Francisco,” Harvey Milk wrote President Jimmy Carter in February 1978. “The Peoples Temple Christian Church is not located in my district, so I have no political ties or obligations to this church. I am writing to call an urgent concern of theirs to your attention.”

The issue at hand involved a bitter and bizarre custody battle. Timothy Stoen had served as the right-hand man to the leader of Peoples Temple, the Rev. Jim Jones. In 1977, Stoen broke from Jones and Peoples Temple, a year after his estranged wife, Grace, had done so. But their preschool-aged son, John Victor, remained with Jones in the church leader’s commune in the Guyanese jungle, known as Jonestown. The Stoens were petitioning to get their son back.

Milk wrote Carter on Jones’s behalf in the “custody case now pending in Guyana.” He failed to mention that the case arose because a California Superior Court judge had awarded Grace Stoen custody of her son.

On Aug. 26, 1977, the judge issued a preliminary ruling granting her custody and ordered Jones to appear in court. The reverend failed to show: He had fled to Guyana less than a month earlier, after New West magazine published an exposé of Peoples Temple.

The New West article described Temple goons paddling a teenaged girl’s backside into “hamburger” for hugging a lesbian, the church running foster homes as a ruse to expropriate tens of thousands of dollars, fraudulent real-estate transfers that enriched the temple at the expense of suckered parishioners, and forced confessions signed by members admitting abhorrent acts that the group’s hierarchy filed away to discredit future defectors.

Milk rushed to defend Jones and Peoples Temple. He wrote a letter to New West, insisting that the religious leader accused in the article of ordering the beating of a teen because her suspected lesbianism “posses[ses] as much integrity as anyone I’ve ever met.”

In Milk’s letter to Carter, Jones emerged as a saintly figure.

“Rev. Jones is widely known in the minority communities here and elsewhere as a man of the highest character, who has undertaken constructive remedies for social problems which have been amazing in their scope and effectiveness,” Milk wrote.

“He is also highly regarded amongst church, labor, and civic leaders of a wide range of political persuasions. Our own Board of Supervisors has presented Rev. Jones with a Certificate of Honor, unanimously passed by all members, praising the church for its many projects ‘which have been so beneficial to all the citizens of the Bay Area.’”

Milk’s fawning letter left even Michael Bellefountaine, an AIDS activist and sympathetic chronicler of Peoples Temple’s intersections with gays and lesbians, to label it “disturbing in that it reads as if it were written by a Temple publicist.”

The reverend whom Harvey Milk hailed as a “man of the highest character,” in reality, came unhinged long before migrating south. Events, including the stress of his secrets published in the media, unraveled him further.

Always prone to outlandish claims, Jones boasted of ever greater powers. One member who managed to escape Jonestown recounted that at various times the leader said “he was the reincarnation of either Lenin, Jesus Christ, or one of a variety of other religious or political figures.”

Jones maintained that he wielded the power of extrasensory perception and “could tell what everyone was thinking.” He said that “he had powerful connections the world over, including the Mafia, Idi Amin, and the Soviet government.”

The preacher lauded for his church’s drug-rehabilitation efforts spiraled into drug addiction, taking “injectable Valium, Quaaludes, uppers, barbiturates, whatever he wanted,” in the words of biographer Tim Reiterman. Jones’s “voice, once so riveting, now sounded pathetic, raspy, as if he were very drunk or his tongue coated with peanut butter.”

Milk could not have known everything that was happening in Jonestown. But his letter to Carter is notable for its omissions.

He did not mention the many articles in the San Francisco press alleging terrible deeds committed by the reverend: ordering burglaries, overseeing beatings, drugging followers, fleecing life savings, conducting dry runs for mass suicide, and holding hundreds of people against their will in a concentration camp.

Claiming “no political ties or obligations to this church,” Milk did not divulge that Peoples Temple promoted him from its pulpit and press, provided hundreds of campaign volunteers, and printed leaflets boosting his electoral prospects. The men clearly shared strong political ties. Milk so loved Jim Jones that he lied to the president of the United States in order to help him.

Nor did the letter to Carter mark the first time Milk pleaded Jones’s case to a world leader.

Two months before writing the American president, Milk sent a similar letter to the Guyanese prime minister, socialist strongman Forbes Burnham. He praised Peoples Temple as an organization responsible for more good in San Francisco than any other. “Such greatness I have found at Jim Jones’ Peoples’ Temple,” Milk wrote.

Milk was not the only prominent advocate for Peoples Temple. California Lieutenant Governor Mervyn Dymally, San Francisco Mayor George Moscone, and left-wing icons Jane Fonda, Huey Newton, and Angela Davis all lent their names in support of Jones after the New West exposé led to a series of investigative stories on Peoples Temple.

Willie Brown, the California state assemblyman who would later serve as mayor of San Francisco, had earlier portrayed Jones as a combination of “Martin [Luther] King,” “Angela Davis,” “Albert Einstein,” and “Chairman Mao.” Now he came to his friend’s aid again.

“Rev. Jim Jones is that person who can be helpful when all appears to be lost and hope is just about gone,” Brown assured Burnham in November 1977. “Having him as a resident in your country can only be a plus no matter how short or long his stay.”

Jones’s stay lasted one year from when Brown typed his missive. It didn’t prove a plus—for Willie Brown, Harvey Milk, Forbes Burnham, or anyone else.

This article has been adapted with permission from Daniel Flynn’s book, “Cult City: Jim Jones, Harvey Milk, and 10 Days That Shook San Francisco.”