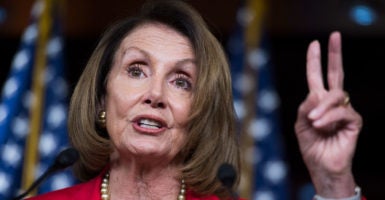 A new report from The Heritage Foundation shows that if tax reform were to be repealed or expire, the average American would have $26,906 less in take-home pay over the subsequent 10 years.

“After 2025, most of the individual tax cuts revert to prior law. The tax cuts expire,” Adam Michel, a policy analyst at The Heritage Foundation’s Thomas A. Roe Institute for Economic Policy Studies, told The Daily Signal in an email.

Michel is a co-author of the study, released Wednesday, that found that repealing the tax reform or letting it expire and causing taxes to revert to their former rates and structure would leave Americans “$26,906 poorer over the following 10 years.”

“To solidify the current broad-based economic expansion, Congress must make the tax cuts permanent,” Michel said. “A series of three new bills that make up ‘Tax Reform 2.0’ have passed the House.

“The package would make much of last year’s tax reform permanent, introduce new simplifications for family saving, and provide a helping hand for new small businesses,” he said.

Take-home pay for the average family of four could drop by $45,739 over 10 years, according to the study, and taxpayers could face decreasing job openings, lower incomes, and higher taxes in every congressional district.

The tax-reform package, the Tax Cuts and Jobs Act—which cleared Congress Dec. 20 and went into effect Jan. 1 after President Donald Trump signed it into law—repealed the corporate alternative minimum tax and cut the corporate income-tax rate from 35 percent to 21 percent, among other changes.

According to Americans for Tax Reform, a conservative-leaning taxpayer-advocacy group, 90 percent of workers in America are receiving more take-home pay due to the tax reforms.

The group has cataloged 730 examples of business expansions, job-benefit increases, utility-rate reductions, pay raises and bonuses, and 401(k)-match increases, all because of the tax reform.

House Minority Leader Nancy Pelosi has said that she would repeal the tax-reform law.

The Heritage study says that repealing tax reform would be detrimental and contends that lawmakers instead should work to pass “Tax Reform 2.0.”

“Instead of repealing the tax cuts, or rolling parts of them back, Congress should make the [Tax Cuts and Jobs Act] permanent and reduce the deficit by reducing spending to align with projected revenues,” the report argues.

“A balanced budget and lower tax rates will lead to a larger economy by both increasing the capital stock and allowing Americans to keep more of what they earn,” it says.