For Ukraine, US Support Key as Religious Independence From Russia Sparks Fears of Escalated War 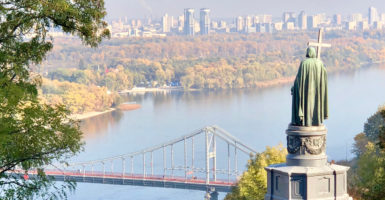 Ukraine now has a national Orthodox Church that is independent from Moscow for the first time since 1686. Pictured: A monument to Volodymyr the Great in central Kyiv, with the Dnieper River in the background. (Photo: Nolan Peterson/The Daily Signal)

KYIV, Ukraine—The death of an American fighter pilot during an air combat exercise Oct. 16 in Ukraine was a tragic stumble as the U.S. ramps up its efforts to help the embattled post-Soviet country defend itself from Russia.

“This is a sad day for the United States and Ukraine,” Maj. Gen. Clay Garrison, head of the California Air National Guard and the top officer in charge of Clear Sky-2018, said in a press release. “Our deepest condolences go out to the family, friends and fellow airmen of both the U.S. airman and Ukrainian aviator who were killed in the incident.”

The other pilot on board, Col. Ivan Petrenko of the Ukrainian air force, also died, Ukrainian officials said.

As of this article’s publication, details were still sketchy about what went wrong. Ukrainian officials said U.S. personnel were taking part in the investigation.

Nehring was a seasoned fighter pilot who flew F-16s before transitioning to F-15s for the California Air National Guard’s 194th Fighter Squadron, part of the 144th Fighter Wing. He was taking part in an aircraft familiarization flight in the Su-27 at the time of the incident and no other aircraft were involved, Ukrainian officials said.

Sponsored by U.S. Air Forces in Europe and comprising about 950 personnel from eight NATO countries and Ukraine, Clear Sky-2018 was Ukraine’s largest air combat exercise in the post-Soviet era.

The Su-27 is a workhorse fighter jet for the Ukrainian and Russian air forces. Ukrainian pilots are trained in some of the same Soviet-legacy air combat tactics and techniques as Russian pilots.

Thus, for U.S. pilots, Clear Sky-2018 was an invaluable opportunity to go head-to-head against a close approximation of the kinds of equipment and tactics Russian pilots would wield in an air war.

However, U.S. officials were careful to point out that the multinational exercise was not part of a broader effort to make Ukraine a NATO country. Rather, the focus was on the interoperability of Ukraine’s air force with NATO forces to create a “region of stability” in Eastern Europe.

“We’ve never done this before, at least not at this level,” a U.S. military official said. “This isn’t a step, but a stride.” 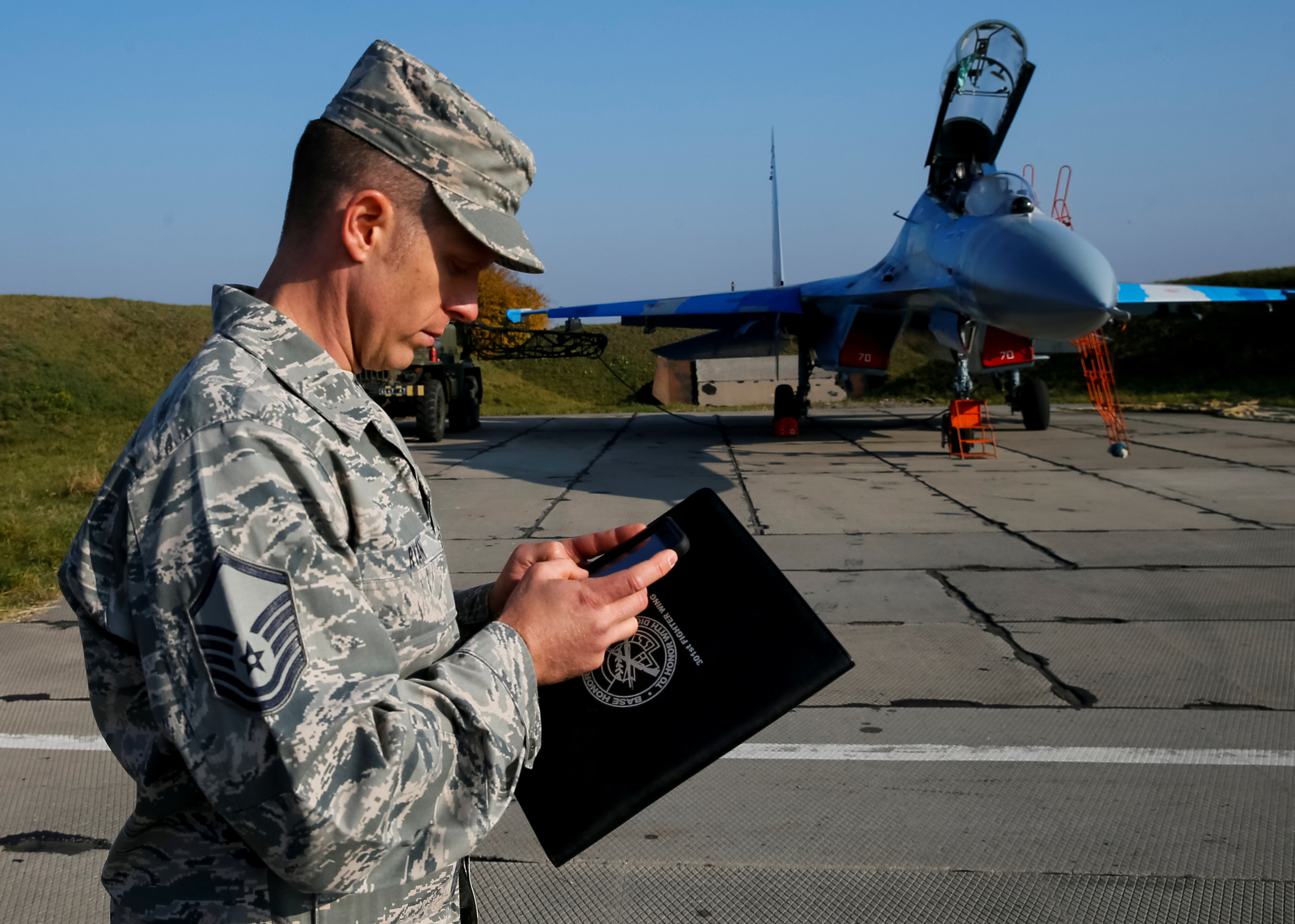 This is a moment particularly fraught with danger for Ukraine as it tiptoes through a minefield of fresh crises with Russia.

Now, in the wake of Constantinople’s decision last week, all three Ukrainian Orthodox churches plan to merge into one unified, independent Ukrainian church.

“This is the fall of the ‘Third Rome’ as the most ancient conceptual claim of Moscow for global domination,” Poroshenko said.

Religious independence from Moscow is a historic breakthrough for Ukraine, marking a decisive and pivotal step forward in its ongoing cultural divorce from Russia that dates to the 2014 pro-Western revolution.

However, many in Ukraine fear that last week’s historic religious divorce could upheave the uneasy status quo in the ongoing shooting war between Russia and Ukraine.

Moreover, Russian President Vladimir Putin’s domestic approval ratings have been cratering due to unpopular pension reforms he has proposed. Consequently, many experts say Putin is in the market for a geopolitical win that will play well with Russian voters.

“It is, indeed, an extremely dangerous time,” said Marcel Van Herpen, director of the Cicero Foundation, a Dutch think tank that specializes in Russian and European affairs.

“After the patriarch of Constantinople granted autocephaly to the Ukrainian Orthodox Church, Putin is like a wounded animal,” Van Herpen said. “His popularity rating already went down in recent months, due to the pension reform, and this decision came on top of it.”

Peskov added that any such Russian intervention would happen “exclusively through political and diplomatic means.”

Ukrainian officials, however, were quick to compare Peskov’s rhetoric with the propaganda pretenses under which Russia invaded Ukraine’s Crimean and Donbas territories in 2014.

“We heard similar statements by the Russian Federation about ‘protecting the Russian-speaking population’ as an excuse for its aggression against Ukraine,” Marianna Betsa, press secretary of the Ministry of Foreign Affairs of Ukraine, tweeted Oct. 12.

“From sticking a Russian flag on the seabed of the Arctic to waving the flag over occupied Crimea, Putin has a track record of using the Russian flag to distract his disenchanted people,” said Luke Coffey, director of The Heritage Foundation’s Douglas and Sarah Allison Center for Foreign Policy.

“With so many Russians fed up with sanctions, a terrible economic situation, and Russia’s pariah status on the international stage, countries like Ukraine and Georgia should be particularly nervous right now,” Coffey said. 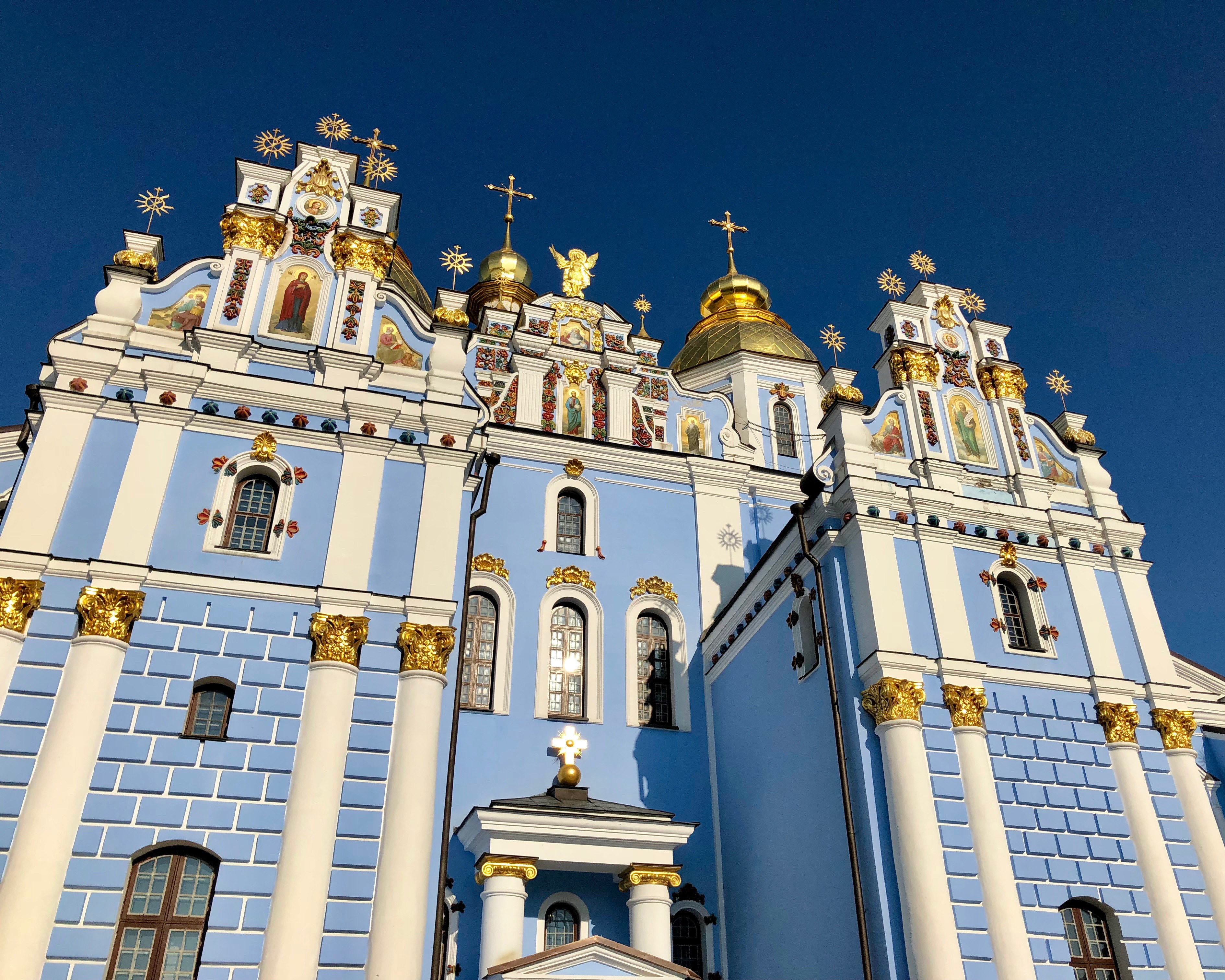 St. Michael’s Golden-Domed Monastery in central Kyiv is a careful reconstruction of the building demolished by the Soviets in 1937. (Photo: Nolan Peterson/The Daily Signal)

For four and a half years, the conflict has remained at a precarious impasse due to the February 2015 cease-fire, known as Minsk II, which has quarantined the shooting war to a static, entrenched front line. Nevertheless, the threat of a major escalation hangs over Ukraine like a sword of Damocles.

“An intensification of the armed struggle is possible,”  the Cicero Foundation’s Van Herpen said. “We should be prepared for new provocations and escalations because one thing is sure—Putin needs some military successes to improve his popularity rating and, additionally, he wants to end his last presidential term with a major geopolitical success.”

Beyond the Donbas battlefields, since 2014 Russia has waged a concurrent shadow war of assassinations, sabotage, propaganda, and cyberattacks across all of Ukraine. Also, in a major expansion of the conflict this year, Russian naval forces ramped up their harassment of merchant vessels bound for Ukrainian ports in the Sea of Azov.

The move is tantamount to a blockade, many Ukrainian and NATO officials say, and has spurred Ukraine to harden its southern coastal defenses in preparation for a Russian amphibious invasion, as well as to kickstart a crash-course buildup of a shallow-water “mosquito fleet” of gunboats.

To that end, this month Ukraine took delivery of two retired U.S. Coast Guard cutters. And in the Sea of Azov region, Kyiv held a large-scale military exercise to simulate the defense against a Russian amphibious invasion force.

“What we can expect in the short run is more aggressive policies in the Sea of Azov,” Van Herpen said. “The Kremlin increasingly harasses Ukrainian ships, wanting to make the Sea of Azov into some kind of a Russian lake. Here NATO should act decisively and defend the free access to international waters.”

Still, Russia’s eclectic campaign of aggression has done little to derail Ukraine’s pro-Western pivot, which the 2014 revolution inexorably set in motion. In fact, many polls clearly show Ukrainians are more pro-Western than ever before.

More than three-quarters of Ukrainians say they believe Russia aims to destroy the Ukrainian state, according to a February poll by the Razumkov Center, a Ukrainian think tank. That same share of Ukrainians agree the normalization of relations with Russia is impossible as long as Putin is in power, the poll found.

“Putin’s strategy is now seeing a complete fiasco, as he has close to no allies worldwide, he has got a deep economic crisis in his country, and he just cannot explain why they needed to unleash the war against a friendly neighboring country,” Poroshenko, Ukraine’s president, said in an Oct. 16 TV interview.

In its first two years, the Trump administration has significantly turned up U.S. support for Ukraine, most notably at the end of 2017 by reversing an Obama-era ban on sending Ukraine lethal weapons. Since then, the U.S. has delivered 210 Javelin anti-tank missiles along with 37 launchers (worth roughly $47 million), as well as advanced sniper systems.

The United States has assisted Ukraine in other, nonlethal ways that precede the current administration.

Police officers from America have helped train their Ukrainian counterparts, and the FBI has assisted Ukrainian authorities in some key investigations.

The U.S.-Ukraine partnership also is a two-way street.

For four and a half years, Russia has field-tested its modern hybrid warfare doctrine in Ukraine—including the integration of propaganda and cyberwarfare with conventional military operations, a doctrine known as hybrid warfare.

Thus, Ukraine’s wartime experiences are a master class in modern combat for U.S. military forces as they recalibrate from a generational focus on unconventional, counterinsurgency warfare to a new era of “near-peer” threats from countries such as Russia and China. 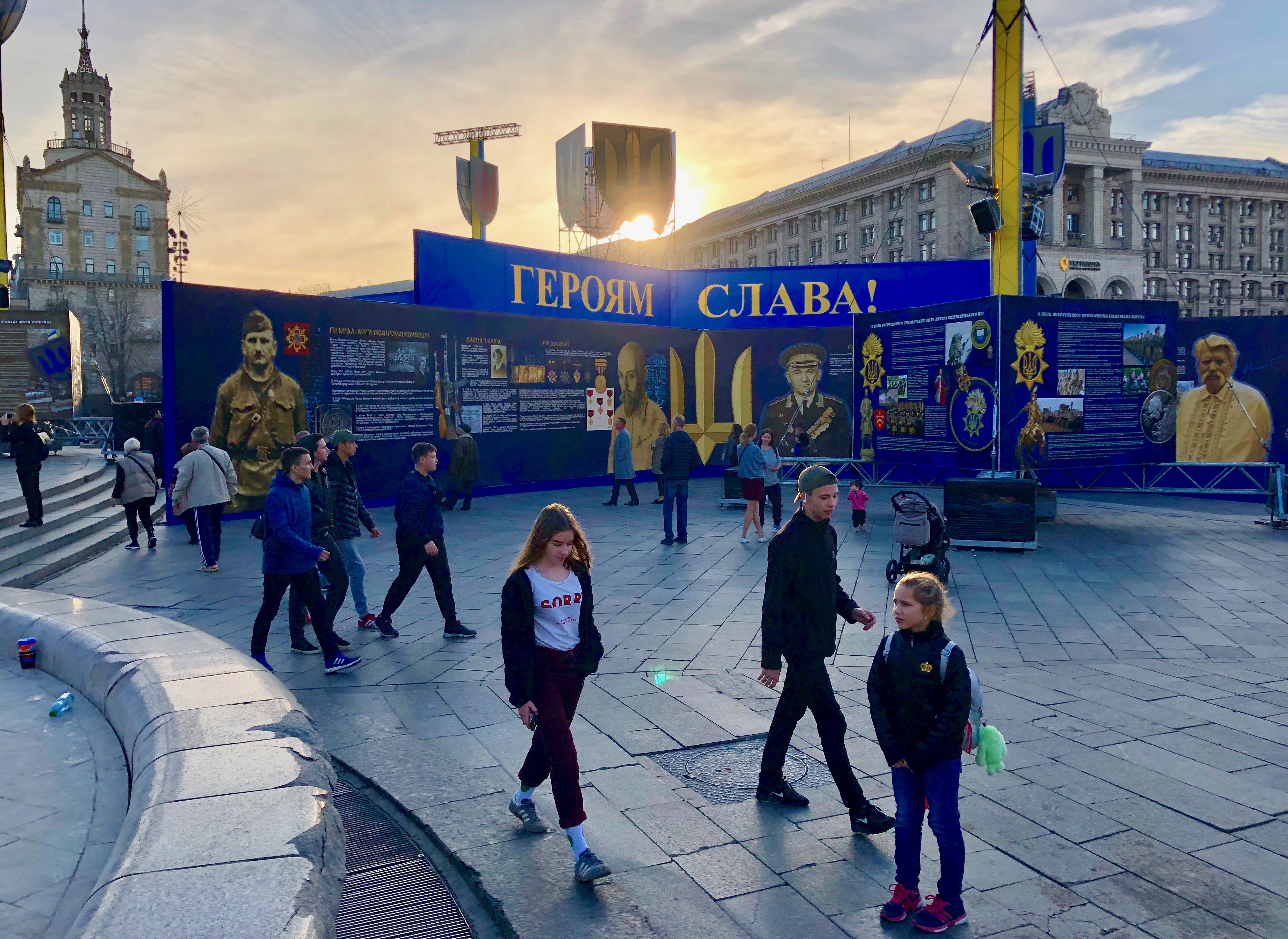 When the war began in April 2014, Ukraine was able to field only 6,000 combat ready troops. Today, Ukraine maintains a fielded force of about 60,000 troops in the eastern war zone, out of a larger standing army of roughly 250,000 active duty personnel and 60,000 reservists.

“Ukraine finally has an army that can stop the aggressor,” Poroshenko said Oct. 13 during a speech at the Kherson State Maritime Academy.

Ukraine’s national security doctrine calls Russia the “aggressor nation” and identifies a Russian invasion as the country’s paramount national security threat. And for good reason. About 80,000 Russian troops, equipped with armor and artillery, are forward-deployed on Ukraine’s borders and capable of launching an invasion on short order, Ukrainian and NATO officials say.

Ukraine is no longer on a crash-course military buildup to meet the immediate needs of the crisis in the Donbas. Rather, Ukraine is now incrementally building a combined military force for the express purpose of stopping a Russian invasion, while also keeping an eye toward improving interoperability with NATO forces.

In the course of four years, and while fighting a war, Ukraine has transformed its once defunct military into a burgeoning regional powerhouse and the chief roadblock between Russia and Central and Eastern Europe—a total upheaval of the pre-2014 regional security picture.

Other countries similarly feel the Russian threat breathing down their necks—Poland and the three Baltic states of Estonia, Latvia, and Lithuania in particular. In their minds, a strong Ukrainian military is a bulwark against Russian aggression across Central and Eastern Europe.

“Poland is very supportive of stronger and better equipped [Ukrainian] armed forces,” a Polish diplomat told The Daily Signal, speaking on condition of anonymity due to professional guidelines about media communication.

“We want to see [the Ukrainian] armed forces fully meeting NATO standards,” the diplomat added. “We also want to learn more from Ukrainians, because they know and understand how to fight against Russians. They are doing it on a daily basis.”