Trump Right to Consider Pulling Out of INF Treaty 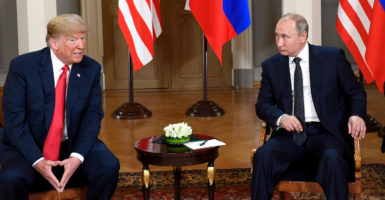 It’s not clear as of this writing if the United States will formally leave the Intermediate-Range Nuclear Forces (INF) Treaty, signed in 1987 by President Ronald Reagan and Soviet President Mikhail Gorbachev. But the U.S. certainly has a couple of solid reasons to get out.

The first is that the Russians are violating the missile pact.

The INF Treaty restricts the U.S. and Soviet Union (now Russia) from producing or testing ground-launched, conventional, and nuclear cruise and ballistic missiles and associated launchers with a range of 500 to 5,500 km.

Given the Cold War tensions at the time between the United States and NATO on the one side, and the Soviet Union and the Warsaw Pact on the other, this arms control treaty was considered a significant step toward reducing the threat of war in Europe.

At the time, it was a noteworthy arms control agreement that eliminated an entire class of missiles: land-based short and intermediate-range ballistic and conventional missiles such as the American Pershing II and Soviet SS-20 missiles.

That steady state of affairs began to markedly change for the worse in 2008, when concerns began to surface that Moscow had violated the treaty by developing a new missile system.

That troubling development came at the end of the Bush administration and carried over into the Obama White House.

While the Obama administration attempted to “reset” relations with Russia and conclude another arms control agreement with Moscow — which came to be the 2010 New START (Strategic Arms Reduction Treaty), concerns about the INF Treaty weren’t forcefully acted upon.

That changed slightly in 2014, when the Obama State Department finally called out Russia for its ongoing violations of the INF Treaty after reports that it had tested a land-based cruise missile, the SSC-8.

Unfortunately, Washington’s accusatory rhetoric at the time had no effect on Moscow’s course of action on the arms control agreement. Indeed, by last year, the Russians had reportedly deployed at least one operational SSC-8 military unit.

The other problem with the INF Treaty, beyond Russia’s violations of it, is China. Beijing isn’t party to the U.S.-Russia INF Treaty and therefore isn’t constrained by any of the arms control restrictions set forth on intermediate range missiles in the agreement.

As such, China has developed and deployed a significant conventional and nuclear ballistic and cruise missile arsenal as part of its rising superpower status in the international system and its efforts to assert its interests in the Pacific region—and beyond.

Today, China has the world’s second largest military budget and is involved in a significant buildup of its military, which in some cases threatens important American interests in the Pacific—for instance, its claims of sovereignty over much of the South China Sea.

A senior U.S. military commander asserted last year that 95 percent of China’s land-based missiles—which, without question, add a potent punch to Beijing’s military might—would be restricted under the INF Treaty, an agreement that Moscow and Washington are currently bound to uphold.

As challenges arise in the Pacific involving China and potentially North Korea, the INF Treaty prevents the United States from being able to freely develop and deploy our military capabilities to the fullest extent possible in support of our national security interests.

It would be both risky and unsound for the U.S. to ignore concerns over Russia’s violations of the INF Treaty, as well as China and its growing missile arsenal, which threatens U.S. forces and interests in Asia.

As this is being written, the Trump administration hasn’t formally provided notice that it’s leaving the INF Treaty. Indeed, National Security Advisor John Bolton’s visit to Moscow this week likely involves serious discussions with his Russian counterparts on the future of the treaty.

Beijing has expressed its view—not surprisingly—that Washington shouldn’t leave the INF Treaty. China is also very unlikely to sign onto the existing treaty or some sort of negotiated expansion of the treaty, as doing so would diminish its missile muscle.

The Russians could certainly come back into compliance with the treaty to our satisfaction, but if they decide to continue to violate it—which seems likely—there are a number of very good reasons for us to drop the treaty entirely.