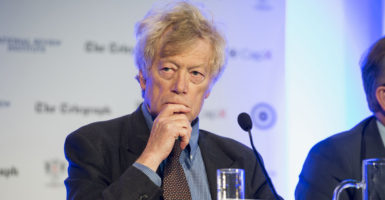 Sir Roger Scruton has described himself as a “reluctant capitalist,” but when asked why in  a recent appearance at The Heritage Foundation, he jokingly answered: “Because I’ve never had the chance to make money for myself.”

David Burton, a senior research fellow in economic policy at Heritage, interviewed the prominent British conservative philosopher Oct. 11 on a wide variety of subjects, from capitalism and the definition of conservatism to environmentalism and architecture.

Here’s what Scruton, 74, had to say on six main topics:

Scruton–a native of Brinkworth in Wiltshire, England–said that America, while a great country in many ways, shows “the bad side of a community entirely based on the pursuit of profit and entrepreneurship.”

America too often ignores other important aspects of community living, he said, among them the “duties of care” that individuals owe to one another and charity.

Scruton said that human beings generally don’t expose all aspects of life to exchange on the market, especially personal relationships and the buildings that they cherish. He said the community should have a say in what to do with such things, rather than attempting to turn them into “an instrument of exchange on the property market.”

Scruton noted that the term “capitalism” comes from the German philosopher Karl Marx, who saw it as a conspiracy and power grab by the bourgeoisie rather than a spontaneously occurring system.

“Every word that has an ‘-ism’ should be distrusted,”  Scruton said to chuckles. Comparing his opinion to that of the 20th-century Austrian economist Friedrich Hayek, Scruton said that a better name for capitalism would be “economic freedom.”

Scruton, knighted in 2016, said he defines conservatism in the way that British philosopher and statesman Edmund Burke did: adapting the fragile things we love to change.

“I think that conservatism is what its name declares it to be: the desire and policy that comes from conserving things,” he said.

Scruton said that conservatism also is the love of the things in life that are easier to destroy than rebuild. Because we keep what we love, he said, conservatism is uniquely rational.

On the left, he said, he sees only “policy suggestions and attitudes which derive from, if not hatred, at least the desire to pull down things and destroy them.”

Addressing the origins of conservatism, Scruton said conservatism emerged as a moderating influence on 18th-century liberalism, which long has been in danger of leading to anarchy when it seeks to destroy the social fabric of a nation.

Scruton said the British philosopher John Locke would never have called himself a “liberal” in the American sense. Although many in the past have understood liberalism to be the respecting of individual freedom and reconciling it with orderly government, Scruton said, it now means the surrendering of one’s freedom to the state.

Scruton said American and British conservatives are aware that Western civilization prizes individual liberty, and believe that we should defend this civilization.

Scruton said the U.S. Constitution “begins with the desire to limit what the government does, rather than to impose government,” unlike the British constitution.

“The American settlement is a process of intellectual thought and the creation of a constitution designed precisely to last forever,” he said.

Scruton said that while “there is no individual liberty without private property,” and that this is “fundamental to all our other values perpetuated by our civilization,” in Britain there is no absolute right to hold property or land.

He also said that in America there are many self-governing associations–such as homeowners associations–that are completely lacking in Europe, where people conceive of individual property as held in trust with the wider community.

Scruton, referencing  Burke and the French political scientist Alexis de Tocqueville, said that meaning in life comes from involvement in associations. He made the distinction between civil society, which he defined as “a system of associations,” with the state, “a system of offices.”

In answering the question of the role of government in supporting civil society, Scruton said this is “open to capture from the left,” who use the pretext of government support to impose government programs on communities that would not have spontaneously formed such programs otherwise.

Americans seek “shortcuts to gratification taken in solitude and not in communion with others,” Scruton said, and this is “one of the great blows” to American culture.

Scruton also addressed his support for environmental causes during the course of the interview, saying: “Conservation and conservatism are two aspects of the same thing.”

We must work toward “a recognition of a relationship of stewardship to the natural world,” he said.

Scruton said he does not see an unresolvable conflict between free markets and a healthy environment.

“Properly understood, a free economy is more environmentally friendly than any economy so far given to us organized by the state,” he told the Heritage audience.

However, Scruton emphasized that we must protect what he called the “human habitat” from destruction by the “capitalist machine.”

Scruton attributed the perceived disrespect shown by young people to their elders to the fact that young people have not had to face the hardship their parents and teachers did.

He said “universities offer them unreal forms of glory” and “antisocial ideologies.”

“Young people should read,” he said, to laughs from the audience.

Scruton recommended that young people read Burke’s “Reflections on the Revolution in France” as well as “The Federalist Papers,” but also other classics not directly political in nature.

“In order to understand conservatism, it’s not necessary to read the political philosophy of it,” he said. “If you read just Homer and Shakespeare, you’d know what conservatives are trying to say.”

The conservative seeks to conserve what is permanent in human nature, he said, and we can find these permanent things in the classics of Western literature.