Why the Indo-Pacific Is a Critical Region for US Engagement 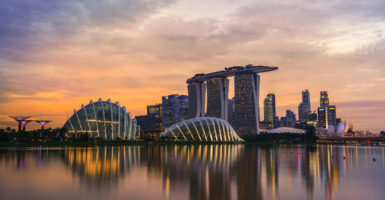 Vice President Mike Pence has unambiguously stated that the U.S. “will continue to assert American interests across the Indo-Pacific.”

In a powerful speech on China at the Hudson Institute in Washington on Oct. 4, Pence made a concrete case for America’s proactive engagement in the region.

[T]o advance our vision of a free and open Indo-Pacific, we’re building new and stronger bonds with nations that share our values across the region, from India to Samoa.

Our relationships will flow from a spirit of respect built on partnership, not domination. …

[N]ext month, it will be my privilege to represent the United States in Singapore and Papua New Guinea at [the Association of Southeast Asian Nations] and [Asia-Pacific Economic Cooperation].

There, we will unveil new measures and programs to support a free and open Indo-Pacific. And on behalf of the president, I will deliver the message that America’s commitment to the Indo-Pacific has never been stronger.

As a leading Pacific nation, the United States recognizes the strategic importance of the Indo-Pacific. Over the past decades, the U.S. and its allies in the region have made the strategic choice to defend the principles of a free-market, rules-based order.

Now, as Pence pointed out, that choice must be reinforced with stronger commitment and concrete action. The Indo-Pacific is a critical region calling for America’s renewed leadership.

In crafting a coherent and comprehensive road map that will advance America’s strategic interest of building “a network of states dedicated to free markets” in the Indo-Pacific, the U.S. cannot give countries in the region the political will that they need to transform their economies according to free-market principles.

Yet, by getting involved at critical levels, the U.S. can ensure that its guidance and concerns are taken into account. The U.S. can also engage at the technical level in a way that enables countries to advance their economic development.

Fundamentally, America’s economic strength and competitive advantage in the Indo-Pacific is best exercised through the private-sector engagement that is the catalyst for real economic transformation.

America is an economic superpower in the Indo-Pacific region. To maintain that position, the U.S. must encourage the free flow of capital, goods, services, and ideas around the region.

Those are areas where the administration’s current trade policies are less than optimal.

More forward-looking policies that reinforce economic dynamism and innovation (throughout the region and at home in the U.S., as well) are needed to create the expanded network of free markets that can ensure the region’s prosperity and provide a solid foundation for peaceful cooperation.

In the end, if the U.S. is to be a credible leading force in the Indo-Pacific, America has to prove itself a positive and indispensable partner, particularly through greater economic and commercial engagement.

An enduring economic freedom partnership with the Indo-Pacific would be a good place to start.