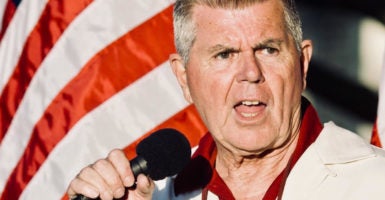 Mark McIntire speaks at a campaign rally July 4, 2014, at the estate of polo magnate Patrick Nesbitt in Montecito, California. Santa Barbara City College dismissed McIntire earlier this year because, he says, of his conservative beliefs. (Photo courtesy of Mark McIntire)

Disclosure: Troy Worden received a $100 donation to a GoFundMe for legal fees from Mark McIntire prior to the publication of this article. A prior version of this article did not disclose this, as the editors were unaware of the connection.

A longtime conservative professor on a liberal college campus didn’t expect to face harassment claims, lose his job over his political beliefs, and then win a $120,000 settlement.

An old friend of Charlton Heston, the late actor and National Rifle Association president, McIntire is no stranger to controversy.

In an email to The Daily Signal, he recalled being elected to the national Screen Actors Guild Board of Directors in 1983 and leading a “successful … coup d’etat against [then-Guild] President Ed Asner to the outrage of Hollywood liberal-progressives.”

But until the election of President Donald Trump, McIntire, a faculty member in Santa Barbara City College’s  philosophy department since 1996, says he was just the school’s “token” conservative.

“For 22 years … it was a standing joke that we had one person on campus willing to speak his mind and contradict the reigning campus orthodoxy,” McIntire told The Daily Signal in a phone interview.

“In 2016, in the run-up to the election, every single campus lecture I attended … turned into a Hillary Clinton pep rally and a Donald Trump hate-fest,” he said, noting that was the case even when the lectures had nothing to do with politics.

Then, earlier this year, he suddenly found himself embroiled in the college’s free speech and #MeToo movements.

When McIntire invited prominent atheist Michael Shermer to campus in March to speak about debunking beliefs in the afterlife and utopian societies, one female educator at the college sent out a mass email to faculty.

In the email, the chairwoman of the chemistry department, Raeanne Napoleon, cited a Buzzfeed article reporting on past allegations of sexual misconduct leveled against Shermer, including attempted groping and lewd behavior at scientific conferences, along with one public accusation of rape.

Even though Napoleon wrote that Shermer “still has the right to free speech,” she recommended that female faculty members and students avoid being alone with him.

Napoleon told Inside Higher Ed that she was inspired by the #MeToo movement to warn fellow faculty members about Shermer. She also wasn’t a fan of McIntire’s politics.

Napoleon said McIntire was well-known for “oversharing” his political beliefs through campus email, admitting to automatically marking his emails as trash in the past.

In response, McIntire came to Shermer’s defense in a series of private emails he sent to fellow educators, as well as in an article he wrote for the student newspaper.

McIntire also referred to a conciliatory e-mail sent to him by Napoleon as a “morning-after regret” of an email to another faculty member.

Those comments—among others—got McIntire into trouble. Napoleon told Inside Higher Ed that his language was suspect in the context of the sexual assault allegations against Shermer.

Soon thereafter, four of McIntire’s female colleagues, including Napoleon, brought  harassment complaints against McIntire under Title IX, the federal law protecting individuals from discrimination based on sex at institutions that receive federal funds.

In the teaching evaluations, Bobro wrote that the topics McIntire chose for term papers and exams were too “highly charged and politicized,” that his Facebook posts were inappropriate, and that he failed to grasp “basic philosophical concepts.”

“I never assigned topics,” McIntire wrote in an email to The Daily Signal. “I let the students assign the topics.”

“In all my 23 years teaching at SBCC, I never had a student paper defending conservatism,” he said.

McIntire said it took several meetings with administrators for Bobro to acknowledge he was incorrect on that point.

In his second evaluation, Bobro wrote that he recommended that McIntire delete Facebook posts critical of other faculty members and transgender individuals, and “go to a diversity workshop on campus this school year.”

“My political ideas and expressions should never have been included in the teaching evaluations,” McIntire said.  “I teach philosophy, which is all about the examination of opposing views, dispassionate, in a civil environment.”

McIntire said he believes the negative teaching evaluations and harassment claims were rooted in a bias against his political beliefs:

I was fired because of a disease. The clinical name for this disease is ‘Acute Social Justice Warrior Campusitis.’

The particular pathogen on the SBCC campus is the #MeToo tribal feminism that fired me because I was the only faculty member with the grit to [publicly] defend opposing views of conservatives, Trump voters, religious, libertarian, and home-schooled individuals.

Bobro did not return calls or emails from The Daily Signal seeking comment.

After months of legal wrangling, McIntire and the college agreed to a $120,000 settlement. According to the student newspaper, The Channels, the decision was unanimous on the part of the college’s board of trustees, with  internal deliberations ending in a 6-0 vote Aug. 9.

McIntire said college documents will list him as having resigned Aug. 3, rather than not rehired or terminated.

He told the student newspaper that the college expunged the three negative evaluations.

In an email to The Daily Signal, he said he has been “fully exonerated” in the four Title IX complaints.

Judge Elinor Reiner, hired by the college to investigate the complaints against McIntire, determined in her final report that the statements McIntire made to the female instructors did not rise to the level of violating Title IX law.

But Reiner wrote that she did “find that a small number of the comments made by McIntire in his e-mails were gender-based in a purposefully disparaging fashion,” adding:

While those comments reasonably could give rise to a belief among some female faculty that at times he was ‘anti-feminist,’ especially since they believed (erroneously) he never directed negative comments toward male faculty members, patently they were not ‘severe’ or ‘pervasive’ enough to demonstrate actionable harassment or bullying took place.

McIntire said he is satisfied.

“I’m grateful that my name was cleared,” he said, adding that Reiner “clearly didn’t like the language I used … but she’s a good judge, and she came down on the side of the law, Constitution and Bill of Rights.”

The college did not respond before publication of this article to The Daily Signal’s inquiries for comment on the settlement.

Napoleon declined to comment in response to an email from The Daily Signal.