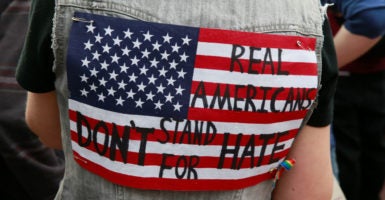 Anna Ayers, a student government leader at Ohio University, reported finding threatening messages in the drawer of her desk a few weeks ago.

Ayers, an LGBT student, said the three notes were “hateful, harassing,” according to The Post Athens, a student-run news outlet, and made specific attacks on her sexual identity.

“Senate will never be the same for me,” Ayers told The Post of the notes, the first of which she said appeared Sept. 27 in her desk at the Student Senate. “The friendships will continue to grow, and our successes will always evoke pride, but the memory of my time in senate and at OU will be marred by this experience. We will all have a memory of a time when this body failed one of its own.”

The incident caused a stir on campus. The problem was, that stir was based on a lie.

Police quickly concluded that no hate crime had taken place, and that Ayers actually had written the notes to herself.

The authorities charged Ayers with a misdemeanor, to which she pleaded not guilty. She is no longer a student at the university.

Incidents like this have become a strikingly common trend in the past few years, especially on college campuses.

While most alleged hate crimes on campus go unsolved, it is hard to ignore the fact that  so many hoaxes have occurred.

A variety of motivations may prompt a student to make up a hate crime, but one thing is for certain: The overwhelmingly dominant ideology on college campuses celebrates victimhood, even above achievement, and achievement itself is worthless without victimhood.

If one doesn’t maintain some kind of victimhood status, your opinion is worth less, your accomplishments are dismissed, and your success is written off as the product of privilege.

It’s no wonder Sen. Elizabeth Warren, D-Mass., continues to maintain that she has Native American heritage—which Harvard Law School once openly celebrated—despite the thinnest of evidence that she has any connection to the Cherokee tribe.

For students seeking attention and accolades from peers on a modern college campus, it may make sense to create the false impression that you have become the victim of a hate crime or some other kind of oppression.

This is especially true given how quickly the stories are exploited for political effect by social justice warriors and an eager media, regardless of whether the stories are actually true.

The infamous 2014 report by Rolling Stone magazine on an entirely made-up rape at the University of Virginia is a prime example. The media soaked up and ran with the story about a violent rape on campus that turned out to be a bizarre scenario created by a troubled student.

Portraying American college campuses as bastions of rape, misogyny, and homophobia is almost laughable, but that is the story activists wanted to run with.

Unfortunately, the number of prominent bogus incidents creates a “boy who cried wolf” effect where people begin to stop believing such stories out of hand because so many have been fake.

“I would say now 80 percent of the events that happen on campus are hoaxes or pranks,” Laird Wilcox, author of the book “Crying Wolf: Hate Crime Hoaxes in America,” told Fox News. “It’s a place where consciousness of discrimination, sexism, and homophobia is at a peak, and when there’s nothing happening, and they need something to happen, they can make it happen.”

This makes it even worse when crimes really do take place.

We must consider what all of this means for American society, that those who attend our elite universities are so saturated with the victimhood ideology that it seems better to create stories of oppression to get attention rather than strive for excellence or individual accomplishment.

We’ve now told generations of young Americans that it’s better to be oppressed and fight oppression—real or fake–than develop oneself to do the great things we should expect from our nation’s “elite.”

Yet, in cases where it appears actual discrimination is taking place, such as in Harvard admission policies that critics allege are biased against Asian students, it is excused away as defending race-conscious “diversity.”

It’s because we’ve wrapped up identity politics and victimhood ideology into a toxic stew that both dehumanizes and leaves its adherents with little personal satisfaction.

Identity has overcome individual merit as the barometer for what we put on a pedestal.

Now, we are too busy knocking off their pedestals those who have actually accomplished great things to focus on what we will do to make ourselves and future generations better off than we are.

This monumentally destructive ethos is eating away at the integrity of our schools and the fabric of our country.

If we want fewer hate crime hoaxes on campus, perhaps we need to change what is openly valued in academia, to focus on achievement rather than knapsacks of privilege and ladders of oppression.

That’s not likely to happen any time soon.

No wonder Americans are in a populist mood.