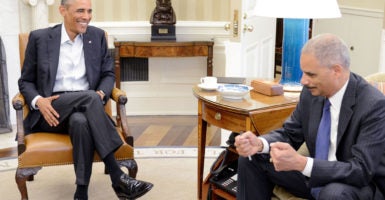 “We didn’t have a scandal that embarrassed us,” Obama said about a year after leaving office, during closed-door remarks leaked to the press.

Conservatives, however, often point to Operation Fast and Furious, the Benghazi terrorist attacks, the IRS tea party scandal, and many other embarrassing scandals to debunk this claim.

The name says it all. The goal of Operation Choke Point, dubbed that and designed by the Justice Department under Obama’s first attorney general, Eric Holder, was to choke out of the banking system entire industries that the Obama administration didn’t like.

By weaponizing regulators at the Federal Deposit Insurance Corp. and the Office of Comptroller of the Currency, the administration realized it could block entire industries from the banking system. This would make it difficult—if not impossible—for businesses to operate.

Gun sellers, small-dollar lenders, and other legal businesses were all targets of the secretive program.

Under the Obama administration, the Justice Department said the program was intended to root out fraud by cutting off “high risk” industries from the banking system. In doing so, the administration didn’t appear to make any differentiation between legal and illegal “high risk” industries, grouping lawful small-dollar lenders and gun sellers with patently illegal activities like Ponzi and credit card schemes.

In August 2017, for example, Keith Noreika, then acting comptroller of the currency, sent a letter to Rep. Jeb Hensarling, a Republican from Texas and chairman of the House Financial Services Committee. Noreika told Hensarling that the Office of the Comptroller of the Currency, part of the Treasury Department, “is not, and never was, a part of Operation Choke Point.”

A report by the FDIC’s Office of Inspector General found the independent agency’s involvement in Operation Choke Point “inconsequential to the overall direction and outcome of the initiative.”

But documents released Friday as part of a lawsuit brought by short-term lenders, known as payday lenders, suggest otherwise.

“If a bank was found to be involved in payday lending, someone was going to be fired,” a senior FDIC official in Washington told his field officers, according to the documents.

Chicago Regional Director Anthony Lowe told a bank’s board of directors that it was the FDIC’s view that “activities related to payday lending are unacceptable for an insured depository institution.”

In Atlanta, the FDIC’s regional director characterized payday lending as a “dirty business,” according to the lawsuit, and threatened the chairman of a bank with criminal prosecution. After the bank agreed and terminated the payday lender’s account in question, the regional director appeared to make an attempt to cover the FDIC’s tracks, pressuring the bank to characterize the decision as its own.

The FDIC’s Atlanta regional director also expressed personal disdain for payday lending, writing in an email to a senior official in Washington: “I literally can not stand pay day lending. They are abusive, fundamentally wrong, hurt people, and do not deserve to be in any way associated with banking.”

These are just some of the accounts revealed in the lawsuit brought by a group of payday lenders against the FDIC, filed Oct. 12 in the U.S. District Court for the District of Columbia.

Payday lenders primarily exist to serve those who can’t get loans from banks. Lenders offer cash advances to people who run out of money between paychecks.

The cost of such a loan typically is between $10 and $30 for every $100 borrowed, which amounts to an annual percentage rate of almost 400 percent. Critics of the industry worry that borrowers will struggle to repay the loans, which will spiral into higher fees for the customer.

Rep. Blaine Luetkemeyer, R-Mo., chairman of the House Financial Services Committee’s subcommittee on financial institutions and consumer credit, is one of several lawmakers who has been fighting to expose and end Operation Choke Choke Point for the past five years.

In response to the new documents released as part of the lawsuit, Luetkemeyer said in a press release:

Today, we learned of additional compelling evidence exposing the vindictive bureaucrats who crusaded against legitimate businesses by starving them of access to financial services. Our worst fears were realized, despite the previous administration’s attempts to defend its actions.

Luetkemeyer sent two letters, one to the FDIC and one to the Office of the Comptroller of the Currency, demanding accountability and answers as a result of the most recent developments. Many of the same staffers who carried out this program under the Obama administration remain at their jobs today.

“As a former [bank] examiner, I find it appalling that senior regulators would not only allow but encourage this type of irresponsible behavior,” Luetkemeyer said. “The intimidation tactics and implicit bias employed by these unelected bureaucrats stands in direct opposition to the important missions of the agencies.”

The overarching concern with Operation Choke Point is that unelected bureaucrats could shut down small businesses or entire industries that they personally dislike by intimidating finance companies into denying service.

In August 2017, the Trump administration announced it was shutting down the “misguided” program. But to this day, Luetkemeyer says, not a single bureaucrat has been held accountable.