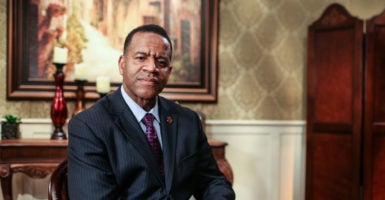 Former Atlanta Fire Chief Kelvin Cochran was fired in 2015 after publishing a book, on his own time, that included biblical views on marriage and sexuality. (Photo: Alliance Defending Freedom)

In a major victory for free speech, the city of Atlanta has awarded former Fire Chief Kelvin Cochran with $1.2 million after violating his First Amendment rights.

Cochran was a highly decorated firefighter who served as the U.S. fire administrator after President Barack Obama hand-picked him for the job. In 2010, he agreed to return to his former position as fire chief of Atlanta at the invitation of Mayor Kasim Reed.

In 2012, he received the “Fire Chief of the Year” award for “pioneering efforts to improve performance and service within the Atlanta Fire Rescue Department.”

But his career came to an abrupt halt in 2015 when Reed suspended him without pay for 30 days and ultimately fired him.

The reason? Cochran’s beliefs about marriage.

Cochran had written and self-published a 162-page Christian devotional—on his own time—that included a few paragraphs on the biblical view on sex and marriage.

He shared the book with a few colleagues, which was when activists complained. The mayor then construed Cochran’s belief that marriage is between one man and one woman as discriminatory and ordered him to attend “sensitivity training.”

Cochran is no stranger to hardship or discrimination. He detailed in an event at The Heritage Foundation how he overcame poverty and racism in order to become a firefighter.

“We grew up in significant poverty in Shreveport, Louisiana,” he said. “I realized that poverty was awful. … We had a lot of food at the beginning of the month, but at the end of the month, most of the food was gone most of the time. We ended up eating mayonnaise sandwiches and drinking sugar water until the next food stamps came.”

These challenges did not stop Cochran from dreaming of a better life.

“At 5 years old, there was a fire across the street from where we lived, and seeing those Shreveport firefighters that day started a conviction in me, that I had the desire to be a firefighter when I grew up.”

Cochran became one of the first African-American firefighters in Shreveport, where he faced major obstacles.

The fire department was predominantly white, and many of the white firefighters did not want to serve alongside people like Cochran. They refused to share the same beds or utensils as Cochran and the other black firefighters for fear of catching a disease.

But Cochran worked hard to change their minds and pursue his dream.

His Christian faith went hand in hand with his hopes for the future.

“The grown-ups in those days told us all of our dreams would come true in America if we believed in and had faith in God, if we went to school and had a good education, if we respected grown-ups and treated other children the way we wanted to be treated,” he said. “They raised us on faith and patriotism.”

Cochran defeated the odds and became a decorated public servant. So when he was fired, it challenged everything he thought he knew about the American dream.

“What that means is children in the United States of America who have that same belief, who want to be a firefighter when they grow up, who don’t want to be poor when they grow up, you can cancel that dream. Because you may have everything else right, but if you publicly disclose your belief in marriage as being between a man and a woman, then you are not fit for not just a firefighter public office, but any public office. And I don’t believe any American, no matter what side of the debate you’re on in this issue, wants that to happen in our country.”

A person’s beliefs about marriage shouldn't lead the government to cancel their dreams. All Americans deserves a shot at making their dreams a reality. pic.twitter.com/SQo1pygdgy

Fortunately, the court agreed with Cochran.

In December 2017, a federal district court ruled that the city’s treatment of Cochran had violated his constitutional right to free speech. The court affirmed that the city cannot police non-work speech, nor can it target views with which it does not agree.

The court pointed out how the city’s over-broad “pre-clearance” rules, which stipulate that the government must sign off on what materials can be disseminated at work, impede free speech.

“This policy would prevent an employee from writing and selling a book on golf or badminton on his own time and, without prior approval, would subject him to firing. It is unclear to the court how such an outside employment would ever affect the city’s ability to function, and the city provides no evidence to justify it,” the court found. “The potential for stifled speech far outweighs any unsupported assertion of harm.”

Such arbitrary standards are unconstitutional.

This ruling was an important win for free speech because it reaffirmed that the government cannot censor views it happens to disagree with.

Now, city officials have taken action to restore justice. On Monday, the city council awarded $1.2 million in damages and attorneys’ fees to Cochran and his attorneys.

This most recent development magnifies Cochran’s victory for free speech.

It is a serious thing when the government presumes to determine which views citizens are allowed to hold or not. After many years of decorated service followed by serious hardship, Cochran and his legal team have received the compensation they deserve.

Thanks to Cochran’s perseverance and brave example, we can look to his case as a precedent and proof that children across America are free to pursue their dreams.