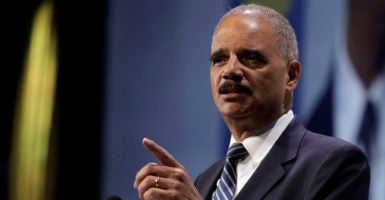 If Holder had been honest, he would have said, “When they win a presidency via the constitutionally mandated route and the duly elected president nominates a Supreme Court justice with a 12-year exceptional record on the bench and then the duly elected Senate follows all the rules and precedents set by Democrats—offering numerous hearings and investigations along the way—and confirms that nominee, we kick them, because we’re frustrated.”

There’s nothing wrong with “fighting” in politics. We don’t need to be hypersensitive about every metaphorical overindulgence (unless it’s Donald Trump; then we must take it literally, seriously, and hysterically). But the problem is that Democrats have a bad habit of acting as if every political setback they experience is caused by some act of criminality. This instigates a lot of people to act like a bunch of children—or worse.

And every legislative action that fails to comport with liberal thinking is to them an apocalyptic event and the end of “democracy.”

If all of this were true, the question would be: Why aren’t more people joining a mob? If your government is stealing your country, why wouldn’t you embrace boorishness or even violence?

“You cannot be civil with a political party that wants to destroy what you stand for, what you care about,” Hillary Clinton recently explained, egging on one of those mobs. If you allow politics to become a stand-in for religion, the apostates don’t deserve decency. “Civility can start again,” Clinton went on to helpfully inform us, when Democrats run Congress.

Of course, it’s easy to embrace fake magnanimity when you hold power. Michelle Obama’s “when they go low, we go high” came during her 2016 speech at the Democratic National Convention, and it was aimed at Trumpian rhetoric when nearly everyone in power believed that Clinton would triumph.

Obama offered her axiom after liberals had spent eight years trying to use executive power to coerce, demean, and morally micromanage the deplorables—yet those clingy God-loving gun nuts stubbornly refused to accept the progressive reinvention of patriotism.

They went low all the time. It was Joe Biden, not Trump, who accused Republicans and their presidential candidate, a man who had dutifully engaged in civic life for quite some time, of betting against America.

Yet Democrats still act perplexed by the backlash. Even now the mob within their ranks is being cast, predictably, as a conservative fiction. “Republicans Seize On ‘Angry Mob’ Mantra To Keep Their Midterm Base Fired Up,” says NPR. CNN insists that it’s a normal, everyday demonstration of free expression to chase politicians’ wives out of public places. You may not use the word “mob” in their presence.

No, it’s not the Parisian mob. Not yet. It’s more like one of those illiberal campus mobs that attempt, often successfully, to shut down debate. A mob is a disorderly crowd of people who have the intent of causing trouble or violence.

So, for example, that means people who interrupt lawful proceedings or people who wildly bang on the Supreme Court doors when a vote doesn’t go their way or people who surround politicians (and their families) and chase them out of restaurants or people who join groups that smear other Americans without evidence—those who try to undermine the rule of law through intimidation.

As a First Amendment absolutist, I say yell at politicians in public spaces all you like. That just means you’re a buffoon. But once you surround people and restrict their movements, you are engaging in more than incivility. Those actions will almost surely compound and become dangerous. And should I even mention that if any of this were directed at Democrats, the nation would be plunged into an overwrought discussion about the importance of civility in American life?

“This is what happens,” Sen. Mazie Hirono, D-Hawaii, said this week. If you act as if every traditionally conservative policy position and legal appointment to the court portends the Fourth Reich, this is indeed what happens. For now, though, partisan incivility isn’t really a mainstream problem. But some Democrats seem to want to change this.