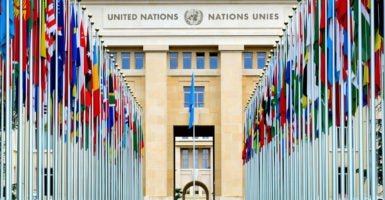 In a severe loss for mothers around the world, the United Nations Human Rights Council in Geneva last month adopted a resolution on maternal mortality that doubles down on the failed policies in place now and ignores that the requisite medical advancements exist to prevent most of the common causes we see today.

The resolution called for “comprehensive sexuality education” and “sexual and reproductive health and reproductive rights,” and dropped all pretense of respecting the national sovereignty of countries that wish to restrict or prohibit abortion.

In addition, the resolution adopted Sept. 27 ignored initiatives that truly could have reduced maternal mortality, such as ensuring access to obstetric and post-natal services, medication, and nutrition.

This should not be the case. We have what it takes to see mothers safely through pregnancy and the birth of their child. What we need is international commitment to implementation of basic lifesaving care—a task that is tragically mishandled by the U.N.

Instead, the three-week Human Rights Council session devolved into the flagrant promotion of abortion, radical sexuality education for children, and other controversial issues.

In his speech to the U.N. General Assembly, President Donald Trump asserted that the U.S. “will not return [to the council] until real reform is enacted.” The absence of the United States’ pro-life position more than likely contributed to the results, but the lack of transparency and accountability that motivated U.S. withdrawal was evident at this council session.

The resolution, shepherded to passage by Burkina Faso and New Zealand, failed to take into account the positions of Russia, Egypt, and other countries that urged the document remain focused on maternal mortality.

Russia, Egypt, and others called for reduced references to abortion and insisted on respecting state sovereignty on the matter.

Prior to this resolution, all references to abortion in U.N. resolutions have been accompanied by a corresponding mention of national laws to safeguard state sovereignty. This marks the first time “reproductive rights,” widely understood as abortion, was included without the crucial national law qualifier.

Nothing in international law infers a right to abortion, and countries that did not agree with this emphasis vowed to retain their sovereignty on this issue. But countries are under enormous pressure from the U.N. system to liberalize abortion laws, and retaining references to sovereignty bolsters their ability to resist this pressure.

Abortion always has been a sticky subject at the U.N. Most Western countries maintain an extremely liberal stance, but much of the developing world continues to place heavy restrictions on abortion access, and some protect unborn life entirely.

The United States represents an interesting case because of the fight to reclaim pro-life laws at the state and federal levels. But any country with abortion restrictions has a vested interest in ensuring the U.N. respects national sovereignty in this regard.

The West obtained its ultimate goal for this resolution—an unqualified reference to “reproductive rights,” thus holding out abortion, regardless of national laws, as essential for the reduction of maternal deaths. This remains a primary ploy of the pro-abortion agenda even though it has been disproven repeatedly by empirical evidence.

There was considerable opposition expressed about this from the onset, but in the end, no country manifested the political will to challenge it via a vote.

Does this signal the demise of the pro-life voice at the U.N? No. In fact, it points more to the increasing delegitimization of U.N. processes than to the state of the world on the abortion issue.

Genuine consensus, the fundamental principle upon which multilateral negotiations at the U.N. are based, is effectively dead at the Human Rights Council. The idea of consensus is that any objection from any country, no matter how small, should be taken into account by the other countries and subsequently left out of the final negotiated resolution. This is intended to prevent the tyranny of the majority and allow every country to influence the discourse.

Respect for consensus has fallen by the wayside, with “progressive” countries dominating the conversation and eliminating dissent.

Russia, Egypt, and other like-minded countries did challenge in a resolution the reference to “comprehensive sexuality education,” denounced the disproportionate emphasis on sexuality matters throughout the document, and stressed that in order to prevent maternal mortality, the priority should be ensuring access to obstetric and post-natal services, medication, and nutrition. But their resolution failed, 33-14.

This shows the inherent problems of handling these issues in this forum. Given its limited composition, voting results do not reflect the views of the full U.N. membership of 193. Moreover, the increasing prevalence of voting on controversial issues has discouraged countries from actively participating in negotiations, resulting in an oppressive climate of silence in the face of increasing affronts to state sovereignty, religious and ethical values, and cultural backgrounds.

In contrast to “comprehensive sexuality education,” no country had the political authorization to go forward with a vote on the abortion issue, allowing for its uncontested inclusion in the final document.

This is the official result of the session, but behind the scenes, it was evident that many countries, even powerful ones, repeatedly called for the national law qualifier and were clear after the vote they would not interpret the text as creating new human rights obligations other than those codified under existing international law.

The lack of respect for this position is reflective of the sad state of affairs at the council today.

Countries that want to protect life will find themselves in an increasingly vulnerable position if “reproductive rights” is allowed to proliferate without sovereignty qualifiers. Although far from ideal from a pro-life perspective, references to sovereignty are essential for the safeguarding of unborn life in countries that ban or restrict abortion access.

The fact that sovereignty was disavowed in this resolution constitutes an enormous threat to the international order. It reveals the willingness of Western powers to engage in blatant abortion promotion even when the lives of women are at stake.