Liberal Activists Just Made a Website Using Kavanaugh’s Name. That Could Be Illegal. 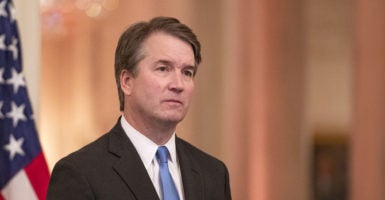 After enduring weeks of character attacks and a disgraceful media lynching, Brett Kavanaugh now sits on the Supreme Court. But some activists still aren’t letting it go.

In a new assault on Kavanaugh, a liberal advocacy group has created a website called “brettkavanaugh.com.”

Instead of containing accurate, truthful information about the justice’s professional credentials and legal career, the webpage instead is about sexual assault. The first thing the viewer sees is a banner headline saying, “We Believe Survivors.”

This is another hit job on Kavanaugh.

Aside from misleading the public about him, this website may very well break the law by constituting an unlawful theft of Kavanaugh’s property interest in his name.

The webpage was put up by a group called Fix the Court, run by Gabe Roth, a former NBC producer who also worked for a left-leaning political consulting firm. Fix the Court is entirely funded by the New Venture Fund, which, according to the Capital Research Center, is a “major funding organization for left-wing organizations as well as the fiscal sponsor of a number of activist groups like [Fix the Court].”

The New Venture Fund has been “criticized as a ‘dark money organization’ for serving as a way for left-wing groups to anonymously funnel money toward advocacy issues, such as attacking Republicans.”

As the Capital Research Center says, although Fix the Court purports to be nonpartisan, “Gabe Roth is highly critical of President Donald Trump’s nominees to the Supreme Court, Associate Justices Neil Gorsuch and Brett Kavanaugh.” This is clearly demonstrated in the way Roth used Kavanaugh’s name in the website domain.

Roth has used Fix the Court to push for term limits for Supreme Court justices as well as live television coverage of oral arguments. He has also pushed for a requirement that justices file detailed financial disclosure reports to be published online. (For the record, Fix the Court doesn’t disclose its donors on its own website.)

Roth has said that he believes the claims made by Dr. Christine Blasey Ford despite their inconsistencies, the lack of corroborating evidence, and outright refutations by some of the alleged witnesses.

Congress has shown concern for the misuse of names in website domains. In 1999, it passed a federal law (15 U.S.C. §8131) that allows an individual to sue any person who “registers a domain name that consists of the name of” that individual without his or her consent “with the specific intent to profit from such name by selling the domain name for financial gain.”

Roth may not fall within this federal statute unless it can be proven he registered Kavanaugh’s domain name in order to sell it for financial gain.

But Roth and Fix the Court may still be liable for what they have done. On its website, Fix the Court lists its office as being located in the District of Columbia. Therefore, D.C. law applies to its operations.

The District of Columbia recognizes the common law tort of misappropriation of another person’s name or likeness. In several decisions, including Vassiliades v. Garfinckel’s (1985) and Tripp v. U.S. (2003), the D.C. courts have adopted the Second Restatement of the Law on Torts. Section 652C of the restatement provides that anyone “who appropriates to his own use or benefit the name or likeness of another is subject to liability to the other for invasion of his privacy.”

The comments to Section 652 make it clear that the interest protected by this rule “is the interest of the individual in the exclusive use of his own identity.” Unlike the federal statute, a violation does not require that someone like Roth acquire the name in order to make a profit, although there seems little doubt that Roth and Fix the Court may profit from increased donations due to the attention given to the website.

In fact, the restatement says that the rule “is not limited to commercial appropriation.” It applies when a “defendant makes use of the plaintiff’s name or likeness for his own purposes and benefits, even though the use is not a commercial one, and even though the benefit sought to be obtained is not a pecuniary one.”

Here, Roth is using the public’s interest in Kavanaugh to benefit his organization by bringing attention, support, and possible donations to Fix the Court and its advocacy against Kavanaugh. That public benefit falls squarely within the rule according to Tripp v. U.S., in which the court pointed out that the types of benefits contemplated under the restatement include “reputation, prestige, social or commercial standing, public interest, or other values of the plaintiff’s name or likeness.”

Roth’s use of Kavanaugh’s name is clearly not just “incidental,” and might well violate the misappropriation rule.

This kind of misappropriation of internet domain names of celebrities, government officials, and even ordinary Americans in order to fool the public into going to such a site and reading derogatory or misleading information about that person is another unpleasant and obnoxious misuse of the internet in the social media age.

No one should have a right to use someone else’s name or likeness in this manner. Roth, Fix the Court, and the New Venture Fund should be embarrassed that they are engaging in such deceitful, underhanded, and potentially unlawful behavior.