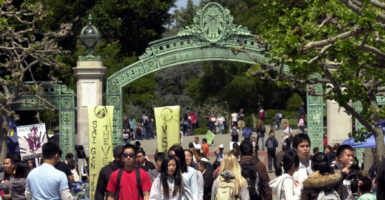 University of California at Berkeley has eliminated one of its historic free speech zones, at Lower Sproul Plaza. Pictured: Students march through Upper Sproul Plaza and Sather Gate on April 17, 2007. (Photo: Gregory Urquiaga/ZumaPress/Newscom)

The University of California at Berkeley, regarded as the birthplace of the free speech movement, has done away with one of its historic “free speech zones.”

Among the changes is designation of the West Crescent section of campus as a “free speech zone,” meaning it will not be subject to additional restrictions imposed last year on other areas of campus.

But Christ also announced that Lower Sproul Plaza, which historically has been considered a free speech zone, along with Upper Sproul Plaza, now will be subject to those restrictions.

The restrictions are part of the university’s “Major Events Policy” implemented in the wake of conservative speaker Milo Yiannopoulos’ aborted “Free Speech Week” event in September 2017.

The new policy was proposed by a commission upon review of the Yiannopoulos incident and several other hotly contested events featuring conservative speakers invited in 2017, among them David Horowitz, Ann Coulter, and Ben Shapiro.

Christ’s announcement Sept. 10 is in line with the April report of the commission, which recommended the chancellor extend the new policy to Lower Sproul Plaza.

Reasons for the Restrictions

The commission’s report indicates that the upper and lower parts of the plaza are “traditional free speech zones.”

“They are exempt from the Major Events Policy, allowing for impromptu gatherings in accordance with the time, place, and manner guidelines” of the university.

“Either adding or moving free speech zones would relieve the burden on this area and reduce the likelihood that vital services will be interrupted,” the report says.

Christ said the decision to impose greater restrictions on Lower Sproul Plaza was motivated by “its proximity to so many buildings that house student-facing services and programs.”

“While most current uses of Lower Sproul Plaza would not be affected, the campus will be able to relocate large, potentially disruptive events from Lower Sproul to a more suitable location,” she said.

Christ also said the university “will promote more opportunities for constructive debate inside and outside the classroom, supporting campus units, departments, and student organizations which seek to host events that encourage intellectual discourse across political and ideological divides.”

The free speech movement at Berkeley began on Sproul Plaza. It later became the movement’s central location and focus for years.

Student groups traditionally have used both the upper and lower parts of the plaza to promote their organizations. Students and nonstudents alike also use the plaza to express political and religious views, often with amplified sound.

Compared with Upper and Lower Sproul, West Crescent is not as popular a section of campus for foot traffic and is not a traditional free speech zone. With regard to the change, the commission says in its report that the university will have to “overcome reluctance to hold large gatherings” away from central campus.

“Events using amplified sound can be scheduled for the West Crescent on very short notice, and the campus will not move events from that location based upon potential disruption,” Christ said in her announcement.

However, the university will relocate events set to occur on Lower Sproul Plaza to other areas of campus because of possible protest.

Nonpartisan and partisan student groups expressed disapproval of the move.

In an email to The Daily Californian, Bradley Devlin, external vice president of the College Republicans club on campus, objected.

“[It’s] not only absurd, it’s immoral,” Devlin said, referencing the section of the commission’s report placing blame on the Berkeley College Republicans for exercising their First Amendment rights by inviting provocative speakers.

“It’s unfortunate that the climate has gotten so bad that we need a free speech commission on campus. It shows that extremists have co-opted the narrative that Berkeley is not a place for free speech,” Manu Meel, CEO of the parent organization of the nonpartisan BridgeUSA group at Berkeley, told The Daily Signal in a phone interview.

Jonathan Butcher, a senior policy analyst with the Center for Education Policy at The Heritage Foundation, said he found it alarming that UC Berkeley policy applied uneven restrictions on free speech in different areas.

Public colleges should make all of the public areas of campus a free speech zone. Anyone lawfully present on campus should be allowed to protest or demonstrate there, so long as they do not interfere with someone else’s ability to do the same.

The university pushed back on claims its policy changes amounted to limiting free speech to designated zones.

“Let’s be clear, the entire campus is a free speech zone, in that community members are free to say what they wish, no matter where they are,” campus spokesman Dan Mogulof insisted in an email to The Daily Californian.

Troy Worden, who graduated from the University of California at Berkeley in May 2018, was treasurer and later president of the Berkeley College Republicans.