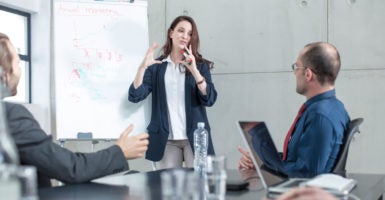 California’s new law not only fails to recognize the gains women have made, it implies that women are undeserving based on their own merits. (Photo: Zero Creatives GmbH Westend61/Newscom)

As a working woman, I’m offended by California’s new law requiring corporate boards to consist of up to half female members by 2021.

Proponents of the law praise it as “glass ceiling-shattering.” But having the ceiling dropped down on women through mandatory gender quotas is hardly the same feat as climbing to new heights on their own ability.

Woman have made huge strides in the workplace over the past decades—gaining higher educations, filling more advanced roles, earning higher incomes, and pushing the envelope on flexibility and family-friendly policies that benefit men and women alike.

California’s new law not only fails to recognize the gains women have made, it implies that women are undeserving based on their own merits.

A 2017 PwC analysis found that while a majority of companies in the S&P 500 had at least one woman on their boards, only 25 percent had two or more. Certain lawmakers don’t think that gender ratio is adequate.

They seem to think they know how to run businesses better than corporate managers. One of the bill’s sponsors, Democratic Sen. Hannah-Beth Jackson, reportedly said, “We are going to require this because it’s going to benefit the economy. It’s going to benefit each of these companies.”

That’s a scary notion. What other ways do politicians think they need to interject themselves in private businesses’ operations for the supposed benefits of those corporations and the economy?

More likely, politicians are more concerned with helping women. That’s not a bad thing, except when they seek to do so to the detriment of others.

The problem is that this law will likely backfire on would-be female corporate board members. The law is estimated to create 684 corporate board slots for women across 377 California-headquartered companies that are on the Russell 3000.

But how will those newly minted female board members feel amid resentment from fellow board members who watched their talented and hardworking male peers get canned for no reason other than their gender?

Will newly appointed female board members earn the same respect from their peers?

Will their voices carry the same weight if everyone views female board members as Title IX recipients, as opposed to intelligent and valuable contributors? Or will they be relegated to “placeholder” status as argued by Lucy Dunn, the president and CEO of the Orange County Business Council.

California’s new law affects only an elite subset of the population, but it would establish a slippery slope.

If governments can dictate the male-female makeup of corporate boards, why not also their racial composition? Maybe even their members’ eye and hair color.

My children’s elementary school has zero male teachers in five of its six grades. I, along with many other parents, think schools and children would benefit from more male teachers. But does that mean the government should mandate that men make up half of schools’ teaching staffs or half of hospitals’ nursing staffs?

Virtually all Americans agree that men and women deserve equal treatment and opportunity, and that is the law of the land. Accordingly, California’s law is unlikely to hold up in a court of law, because it violates both the U.S. and California Constitutions’ Equal Protection Clauses, as well as the Civil Rights Act of 1964.

California lawmakers may be well-intentioned in pursuing more equal gender ratios in the corporate boardroom, but in failing to recognize that women are better off standing on their own two feet than riding on the coattails of predominantly male lawmakers, they’ve done both men and women a disservice.