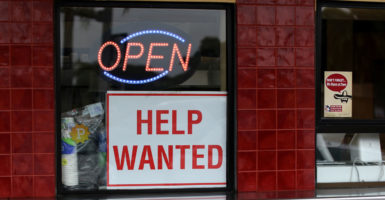 A help wanted sign is posted at a taco stand in Solana Beach, California, on July 17, 2017. (Photo: Mike Blake/ReutersNewscom)

The U.S. economy added 134,000 jobs in September, falling under experts’ expectations by 46,000, according to Friday’s jobs numbers from the Bureau of Labor Statistics.

The unemployment rate fell 0.2 points to 3.7 percent, matching the lowest rate since 1969. Economists expected the rate to drop slightly to 3.8 percent, according to The Wall Street Journal. August’s jobs numbers were revised upward from 201,000 to 270,000.

The September jobs report was released the day after new jobless claims fell back near a five-decade low despite destruction from Hurricane Florence putting many people out of work in North Carolina and South Carolina.

Roughly 207,000 people filed for initial jobless claims, the Labor Department reported Thursday. The amount fell 8,000 from the week prior and outpaced economists’ expectations that the number would continue to sit around 215,000, signaling a stronger labor market that can absorb new workers quickly, according to The Wall Street Journal.