The Power of ‘I Stand With Brett’ 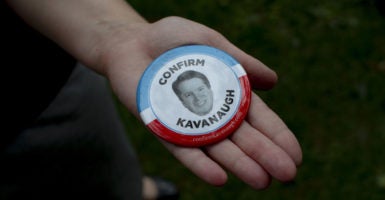 "We know that 'Believe all women' is an irrational and untenable ideology that undermines every argument that we should be treated equally to men," writes Amy Swearer. (Photo: Alex Edelman/Sipa/Newscom)

Friday morning, as the Senate prepared to vote to advance Judge Brett Kavanaugh’s nomination, I took a field trip with some of our interns. It wasn’t anything intensive—just a lap around the Capitol to observe the anti-Kavanaugh protests.

One of our female interns carried a sign. It was a simple sign with four words: “I stand with Brett.”

I somewhat expected those words to attract attention—they are, after all, words so contrary to the sentiments expressed by the majority of individuals who held signs around the Capitol this week.

What I did not expect was the type of attention it would draw and from what type of people.

You see, we were mostly ignored by the large groups of screaming, borderline-hysterical, anti-Kavanaugh protesters. Occasionally, a lone individual would heap some abuse our way, often in the form of telling us we ought to be ashamed of ourselves. But overall, it appeared they had bigger fights to pick than with four fairly innocuous young adults who kept a respectful distance.

No, the attention we attracted was from people largely overlooked amid the shouting. And they were almost unanimously supportive.

Normal, everyday people—tourists from all areas of the country, couples pushing strollers, families with teenage daughters, middle-aged friends, elderly women out for a walk—all quietly, calmly approaching us for a word of thanks.

We could not go 50 yards without being stopped by someone expressing their gratitude or asking if we had any extra signs. I can’t tell you how many wanted to take pictures with the sign. I gave up counting the thumbs ups and smiles. I can’t tell you the number of ways we were thanked by different individuals.

What I do know is that the amount of encouragement received by people who would otherwise have stayed silent in the shadow of the larger anti-Kavanaugh mobs gave me hope.

Went with some interns to do a lap around the Capitol during the cloture vote, and I can't even begin to explain the power of this sign. Every 50 yards we were stopped – not by hysterical protestors, but by regular people. Men, women, kids. All thankful for our presence. pic.twitter.com/agCcHN5oFw

And so many women have stayed silent. We’ve quietly absorbed the abuse aimed at us. Without retort, we have stood by and refrained from engaging in a prolonged ideological battle we fear we’ll fight alone.

But inside, we know. We know that there is not and has never been a shred of corroboration for the claims of sexual misconduct against Kavanaugh. We know that “Believe all women” is an irrational and untenable ideology that undermines every argument that we should be treated equally to men. We know that a good man has been forced to go to war for his honor and his family because he is being slandered on the altar of social justice run amok.

For dozens of women today, these four words printed on poster board were their voice, and they let us know it.

Reason and truth do not always belong to the loudest in the room. Sometimes, they belong to the whisperers the world barely acknowledges, and castigates when it does.

So let me unequivocally state today what so many of us have long known, but have too often refused to say publicly: Women, it’s OK.

It’s OK to not believe other women when the evidence is contrary to their claims.

It’s OK to adhere to basic concepts of rationality and fairness when making a judgment about a man accused of sexual misconduct.

It’s OK to stand with Kavanaugh if your reason so implores you.

These are things we need not only whisper in private. We can say them out loud, and boldly. Behind our whispers is a mighty roar to let others know they are not alone in thinking for themselves.