Poll: Almost a Third of Millennials Identify as Socialists 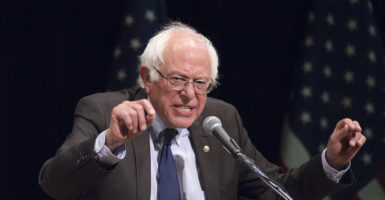 Thirty-one percent of millennials identify as a democratic socialist or socialist, according to a study by Maru/Blue and BuzzFeed News released Thursday.

Participants were first asked what description “best reflects your current political leanings,” before being given options ranging from “Strong Democrat,” to “Strong Republican” or “Independent.”

A total of 22 percent identified as “Strong Democrat,” versus 10 percent as “Strong Republican.”

Millennial men were far more likely to identify as some kind of socialist, with a total of 40 percent responding affirmatively to the question.

Roughly a quarter, 23 percent, answered, “Neither, but I need to learn more,” indicating potentially identifying as a socialist in the future, yet 32 percent said, “Neither, I’d never call myself a democratic socialist/socialist.”

A total of 28 percent of respondents said they would be “Much more likely” or “A little more likely” to vote for a candidate running for political office if he referred to himself as a “socialist.”

Conversely, 27 percent said they would be “A little less likely” or “Much less likely” to vote for the candidate. Over a fifth, 22 percent, said it would make no difference.

The study ran from Sept. 21 to 24 and surveyed 1,006 randomly selected 22- to 37-year-olds “who are members of Maru/Blue’s online panel Springboard America,” an online market research community. The margin of error is plus or minus 3 percent.