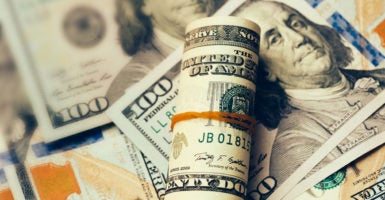 The federal government’s fiscal year 2018 is over. In some ways, it was a banner year: economic growth quickened, average paychecks fattened, and there were more jobs available than there were people looking for work.

But there are clouds on the horizon. Washington’s soaring deficit and debt could wipe out the progress being made, hitting working Americans the hardest.

The Congressional Budget Office projects that the fiscal year 2018 deficit will hit $804 billion, pushing national debt to over $21 trillion. It’s a crushing tide of red ink.

To put those numbers into context, consider the typical U.S. household, which last year earned $60,336. If that typical family spent like the feds, they would have entered the fiscal year more than $300,000 in debt and piled on an additional $12,000 on top of that.

It’s clearly irresponsible, and even higher deficits are just around the corner. Something has got to give.

For years, budget experts have warned Congress that high deficit and debt levels are not sustainable and will eventually lead to an economic breakdown. Unless lawmakers make significant reforms to entitlement programs—the driving force behind the deficits—it’s a question of when, not if, the breakdown will occur.

At that point, lawmakers will have options for digging out of the rubble: historic tax hikes, historic cuts in government services, runaway inflation, or all of the above.

What does the current situation mean for the average American?

History shows that, over time, countries carrying excessive debt experience slower economic growth. This leads to lower take-home pay for workers and fewer opportunities for Americans to improve their situation.

There is also the real risk of sharply higher interest rates and inflation. Everyone feels the pinch from rising rates immediately, due to higher prices for everyday goods and services. People on fixed incomes are stressed the most, but it also makes it harder for people hoping to make major purchases like a new car or their own house.

Put another way, irresponsible federal budgeting makes it harder for current and future generations to live the American dream.

Some analysts argue that last year’s tax cuts are what’s driving up the deficit, but that’s not true. The reduction of the corporate tax rate actually helped corporate revenues to the Treasury rise to the highest level in years.

Federal debt borrowed in credit markets is on pace to consume the entire U.S. economy in just over a decade. And if you include what the federal government has “borrowed” from Social Security and other government trust funds, the total national debt already exceeds our gross domestic product.

Over the next 30 years, both federal revenues and spending are projected to grow. But spending will increase at a rate of about four times faster than revenues. Both deficits and the government’s overall debt will continue to rise.

This can be fixed, but tax cuts and spending cuts will have to go hand in hand. Cutting taxes and increasing spending at the same time is a sure recipe for fiscal disaster. By ignoring the spending problem, Congress is ensuring that this year’s tax cuts will be temporary at best, and the growth potential from those cuts will never be fully achieved.

Historically, government would pay down debt during periods of economic growth, using surplus revenues to wipe out annual deficits. But because of irresponsible budget deals and the explosion of entitlement spending, the opposite is happening. The economy is booming, but so is debt.

Discussion of rising deficits and debt inevitably evokes two things: big numbers and political posturing. Both tend to make the eyes of ordinary Americans glaze over. But they need to remember this: Whatever Congress does or doesn’t do about unsustainable budgets will absolutely have a direct impact on their day-to-day lives.

Congress must get serious about cutting spending and putting the budget back on track before it’s too late. The nation’s prosperity is at risk.