ACORN Veterans Among Those Harassing Public Officials in Kavanaugh Fight 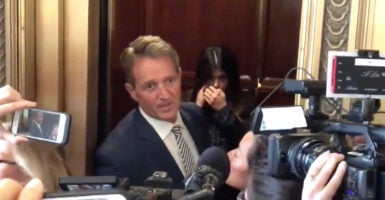 In this image from a video, Sen. Jeff Flake is confronted Sept. 28 by ACORN veteran Ana Maria Archila, bottom, at a Senate elevator on Capitol Hill. (Photo: J.D. Durkin/Cheddar /Reuters/Newscom)

The Association of Community Organizations for Reform Now filed for Chapter 7 bankruptcy in 2010 after a series of high-profile scandals involving undercover video investigations and allegations of voter fraud led to a loss of public and private support.

Two staffers of the Center for Popular Democracy were the women who shouted at Sen. Jeff Flake, R-Ariz., last Friday at a Senate elevator in a widely reported confrontation over his expected vote in favor of Supreme Court nominee Brett Kavanaugh, National Review columnist John Fund reported.

Sens. Lindsey Graham, R-S.C., and Joe Manchin, D-W.Va., are among senators who have been shouted down by anti-Kavanaugh protesters as they spoke to reporters during the final days of the heated confirmation process.

In his article, Fund describes the Center for Popular Democracy as a “left-wing group that is heavily funded by George Soros’s Open Society Foundations.”

Soros, a Hungarian-American billionaire and hedge fund manager, is founder and chairman of Open Society Foundations, an international grant-making institution based in New York City that is known for financing progressive political causes.

An article on the Center for Popular Democracy’s website about the “People’s Convention” in downtown Pittsburgh in July 2016 said the advocacy group was “trying to fill the vacuum left in the wake of ACORN’s demise in 2010.”

ACORN folded in November 2010. Brian Kettenring, who worked for the group from 1995 to 2009, is one of three co-directors of the Center for Popular Democracy.

The Brooklyn-based center’s website lists campaigns that align with its goal of building up communities to “ensure the country embodies [the group’s] vision of an inclusive, equitable society.”

The center says such a society is one “where people of color, immigrants, working families, women, and LGBTQ communities thrive together, supported by a resilient economy and political institutions” that uphold progressive values.

The campaigns cited by the center include “Racial Justice,” “Combatting Wage Theft,” “Organizing for Climate Justice,” and “Building an Immigrant Justice Initiative.”

Kettenring was executive director of the Leadership Center for the Common Good before it merged in 2014 with the Center for Popular Democracy.

The other co-directors listed are Andrew Friedman and Ana Maria Archila.

Friedman, in charge of development and finances, is founder of Make the Road New York, an immigrant rights group affiliated with the center. The group frequently organizes demonstrations against President Donald Trump’s administration.

Archila was a co-executive director of Make the Road New York before joining the center.

Shortly after Archila and another center staffer, Maggie Gallagher, accosted Flake last Friday outside a Senate elevator, the Arizona Republican announced he would vote as a member of the Senate Judiciary Committee to advance Kavanaugh’s nomination to the Senate floor.

But, Flake said, he would not vote to confirm Kavanaugh to the Supreme Court until after the FBI conducted an investigation of no more than a week into “current allegations” against the federal appeals judge.

Trump later ordered such an update of the FBI’s six background investigations of Kavanaugh, setting up this weekend’s expected final Senate floor vote.

Other former ACORN operatives working for the Center for Popular Democracy include senior adviser Steve Kest, who worked for ACORN for more than 35 years, including as its national executive director.

Another is Christina Livingston, executive director of the Alliance of Californians for Community Empowerment, a member of the center’s board who previously worked with ACORN’s Los Angeles affiliate.

The Center for Popular Democracy, founded in 2012, “has 83 staff, offices in New York City and Washington, D.C., and staff in California, Chicago, Georgia, Maryland, Michigan, Minnesota, Pennsylvania, Texas, Wisconsin, and Puerto Rico,” according to its website.

The group claims 50 affiliates and partners operating in 126 cities and 34 states.

ACORN, founded in 1970, once had about 400,000 members and representation in 110 cities, according to a report from the Capital Research Center, a Washington-based nonprofit that tracks how foundations, charities, and other nonprofits spend money and get involved in politics and advocacy.

“ACORN poses as a civil rights group, but it is nothing of the sort,” Matthew Vadum, a former senior editor with the Capital Research Center, wrote in his book “Subversion: How Obama’s ACORN Red Shirts are Still Terrorizing and Ripping Off American Taxpayers.”

“It is a group committed to tearing down America in order to transform it into something unrecognizable,” Vadum wrote.

The Center for Popular Democracy has received substantial donations from labor unions, including the National Education Association, and from left-leaning foundations such as the Tides Foundation, Wyss Foundation, Ford Foundation, Surdna Foundation, W.K. Kellogg Foundation, and Public Welfare Foundation, according to Influence Watch, a project of the Capital Research Center.

The Daily Signal sought comment by phone and email from Lia Weintraub, the center’s senior communications associate, about the similarities between the organization and ACORN.

Weintraub had not responded by publication time.