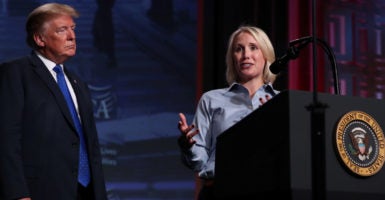 The Wilson Construction Co. in Canby, Oregon, will be expanding its workforce by at least 20 percent in the coming months, says Stacy Wilson, who runs the business her grandfather founded 65 years ago.

So does the president of a Ridgewood, New York, electrical contractor, who says he will be increasing his company’s workforce next year as well.

Both joined Trump on stage at the National Electrical Contractors Association convention in Philadelphia on Tuesday.

“We employ about 500 employees, and thanks to Mr. Trump and tax reforms and the general confidence in the economy, we have really been able to invest more in our employees and grow our company in the last year,” Wilson told the gathering.

Trump invited her onto the stage to speak in the middle of his remarks about the economy.

“We are investing more in employee wages and benefits and bonuses,” Wilson continued. “We are spending millions on equipment and assets, and in general, we are just seeing a huge increase in the work that is coming out, because utilities are spending more to update this aging infrastructure.”

The number of employees could even grow up to 30 percent, she said.

“We have a lot of large projects that are starting,” Wilson said. “This will make a lot of difference. Really, these incentives that are good for businesses are really important for our employees, but also the communities we work in.”

The tax reform law cut the corporate tax rate, previously the highest in the world among developed countries, from 35 percent to 21 percent, putting the U.S. on par with most other industrialized nations, and thus making it more competitive.

“At the heart of our economic revival are the massive tax cuts passed by Republicans in Congress,” Trump said when speaking to the convention crowd.

“We didn’t get one Democrat vote,” the president added. “Those tax cuts are one of the reasons the economy is doing so well. You are talking about a lot of money in the pockets of everybody in this room.”

Under the new law, Trump noted, small businesses can now deduct 20 percent of their business income, as an incentive to invest.

Trump joked that the economy makes him want to return to the private sector.

“Capital investments are soaring because you can now immediately deduct every penny spent on new equipment,” Trump said. “You can do one-year expensing.

“Nobody ever thought that was going to happen. In fact, I should leave and go back into business, maybe. If you would have told me that when I was a private businessman, maybe I wouldn’t have run for president,” he said.

“I’d like to thank President Trump for his perseverance in helping us with his fiscal policies, which enabled my company, Arcadia Electric, to bid on more work and take on more jobs that we are able to do, because we have more coming that is available to us, more than ever before,” he said after Trump invited him onto the stage.

“As a result, we have been able to keep our 120 people employed, but next year, we anticipate hiring 25 percent more hardworking union workers, middle-class workforce, that will bring our company to approximately 150 employees, which we are very proud of,” Gianotti said.

“They work hard. They are the safest, hardest union workers. Their professional abilities is what makes us successful,” he said.