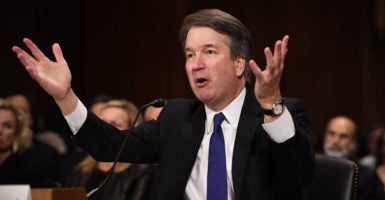 After 10 days of wall-to-wall coverage of being accused of everything from attempted rape to running a gang rape ring, Judge Brett Kavanaugh actually had the politically incorrect audacity to call out those responsible for the tragic circus and public hell that his family has endured. (Photo: Saul Loeb/Pool/ZUMA Press/Newscom)

Chris Prudhome is a Republican strategist and a frequent guest on Fox News Channel. Prudhome formerly hosted a BET series, "All Votes Matter," and also served as an external adviser to the Ben Carson campaign.

Brett Kavanaugh’s passionate outrage during his hearing before the Senate Judiciary Committee last Thursday is generating scorn, not empathy, from plenty of liberals.

“I couldn’t help but think that if a woman had ever performed that way, they would say ‘hysterical,’” House Minority Leader Nancy Pelosi, D-Calif., said Saturday, later adding, “I think that he disqualifies himself with … the manner in which he went after the Clintons and the Democrats.”

“Kavanaugh has revealed himself to be a man without measure, capable of frenzy, full of conspiratorial venom against Democrats. Justice would not be served by his presence on the Supreme Court,” wrote New York Times columnist Roger Cohen.

And The Washington Post’s Paul Waldman struck a similar note, writing, “Think about the man you saw on Thursday—that angry, entitled, disrespectful, uncontrolled man appealing not to the country but to his party to rally around him in order to stick it to the other side—and ask yourself if he demonstrated the kind of temperament you’d want on the Supreme Court.”

In other words, even if Kavanaugh’s FBI investigation finds he is not guilty of the accusations against him, the left is gearing up to argue that his manner was partisan and unbecoming a jurist of the highest court in the land.

Let’s take a step back and review the accusations that caused the mild-mannered Kavanaugh to be outraged.

He was accused of being the leader of a gang rape ring.

He was accused of exposing himself to a Yale classmate. (At a party that no one remembers.)

He was accused of attempted rape by Dr. Christine Blasey Ford while in high school over 36 years ago. (No one at the alleged party will corroborate Ford’s account.)

After 10 days of being accused of these heinous acts without one shred of evidence other than the word of the accuser, I, too, would address the committee members with scorn.

And you can bet if Kavanaugh treated the accusations without passion, those criticizing him would say he was cold and unfeeling, a clear sign that he is guilty as charged.

Think about what is actually at stake.

People are up in arms because after 10 days of wall-to-wall coverage of Kavanaugh being accused of everything from attempted rape to running a gang rape ring, he actually had the politically incorrect audacity to call out those responsible for the tragic circus and public hell that his family has endured.

Kavanaugh was not supposed to declare what everyone watching knew was the truth. He was to pretend that the sham of accusations was not “a calculated and orchestrated political hit, fueled with apparent pent-up anger about President Trump and the 2016 election.”

Within hours of his nomination, Democrats on the very committee that would judge him vowed to do whatever it took to block him from the court.

Kavanaugh had the audacity to tell these same Democratic conspirators who destroyed his good name, “You’ve tried hard. You’ve given it your all. No one can question your effort, but your coordinated and well-funded effort to destroy my good name and to destroy my family will not drive me out.”

The Democrats’ complaint that Kavanaugh is too partisan has no merit.  He is not partisan; he merely called them out on their partisan effort to search out false claims and destroy his good name.

The Democrats have gotten everything that they asked for.

Democrats wanted the emails released. Republicans released the emails even before Sen. Cory “I am Spartacus” Booker had an opportunity to play to the cameras.

Democrats wanted Ford to have a hearing. Republicans were willing to make every accommodation for Ford to be heard, even flying to meet her in California.

The only people showing their partisan colors are Democrats who are poised to vote against Kavanaugh, no matter the actual evidence before them.