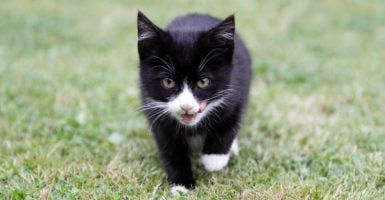 A woman had faced charges for, among other matters, giving medicine to a black kitten. (Photo: Regina Usher/agefotostock/Newscom)

During Hurricane Florence, a North Carolina woman, Tammie Hedges, graciously took more than two dozen animals into a warehouse that she is converting into an animal shelter.

Hedges and volunteers stated that the animals were “to be returned to their owners after the storm.”

One might expect heartwarming stories of the animals Hedges helped, or perhaps her nomination for an animal caretaker “hero award.”

Instead, Hedges was arrested on 12 counts of practicing veterinary medicine without a license.

After the hurricane passed, Wayne County animal control authorities told Hedges that she could hand over the animals voluntarily, or the department would obtain a warrant for her arrest. Hedges did so, but “a few days later, they called me in for questioning and [later] arrested me,” she said.

Hedges said she administered “over-the-counter stuff you could literally find at Dollar Tree” to sick animals because they needed help and, one volunteer said, “the vet was closed.”

Yet reports show that even licensed veterinarians are “prone to over-prescribe” antibiotics, with amoxicillin being “by far the most common antibiotic prescribed to treat confirmed or suspected bacterial infections,” according to PetMD.com.

So, whether or not Hedges simply followed doctor’s orders by administering antibiotics, she saved the lives of Big Momma, Sweet Pea, and more than 20 other animals.

For that, she received a few hours in the county jail and a court date.

The North Carolina Veterinary Practice Act establishes a veterinarian-run licensing board, imposes restrictions on providing veterinary care in the state, and makes it a misdemeanor to practice veterinary medicine without a license. Each offense is punishable by up to 45 days in jail and substantial fines.

That kind of harsh punishment may make sense for quacks masquerading as veterinarians who hurt animals. It is inappropriate, however, for someone who, during a severe storm, temporarily cares for and saves at-risk animals.

The name for Crazy’s Claws N’ Paws—which Hedges founded with volunteers and private donations in 2013—honors a cat named “Crazy.”

It also describes the nature of the charges against Hedges.

It is a waste of precious resources to target her, especially when Wayne County faced damage sufficient to qualify for federal disaster relief through the Federal Emergency Management Agency, and undoubtedly faced other crime concerns in the wake of the storm.

But it isn’t just, and as President Donald Trump might say, it’s “sad.”

“By explicitly providing for punishment in the absence of moral blameworthiness,” argues University of Pennsylvania law professor Paul Robinson, “the law undermines its moral credibility with the community and thereby provokes subversion and resistance, instead of the cooperation and acquiescence it needs for effective crime control.”

Fortunately, this story has a silver lining.

The Wayne County District Attorney’s Office deserves kudos for dropping the charges against Hedges on Sept. 25.

In a statement, District Attorney Matthew Delbridge noted that Hedges has “previously been censured for the unauthorized practice of veterinary medicine” and claimed that, this time, Hedges was “taking advantage of a dire situation to solicit money and opioid narcotics.”

But “having ensured the safety of the animals in question,” Delbridge added, “a dismissal of these criminal charges will minimize further distraction from my core mission of protecting the public from violent crime.”

It will also “allow the North Carolina Veterinary Medical Board to take whatever action they may deem appropriate.”

Whether or not the board seeks to enjoin Hedges from giving other animals basic medical care, or takes some other administrative action, the district attorney’s office has done the right thing by dropping the charges against Hedges.

It just so happens that our four-legged friends can teach us a lesson on criminal justice, too.

Heritage Foundation legal scholar Paul J. Larkin Jr. notes that in correctional facilities across America, prisoners train dogs for up to a year “to perform service work” or “to be companion animals,” and that “both correctional officials and outside observers have found that such programs are quite effective at rehabilitating offenders (and are not half bad for the dogs either).”

The dogs are saved from “‘death row’ at a local shelter,” just as Hedges helps to keep animals out of kill shelters, and the prisoners learn work and life skills.

Fortunately, Hedges no longer faces the threat of experiencing those programs herself.

But her case and those prison dog-training programs illustrate the same adage, as Larkin notes: “To err is human. To forgive, canine.”