Republicans Offered to Interview Ford in California. Why Didn’t She Know That? 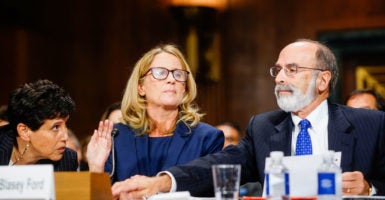 Whatever side you fall on in the fight over Brett Kavanaugh, most Americans can agree on one thing: Somewhere along the way, the process broke down.

This isn’t how it’s supposed to work.

Over the weekend, Republicans blamed the mess on Sen. Dianne Feinstein, the California Democrat who sat on Christine Blasey Ford’s allegation for six weeks.

Instead of Feinstein’s confidentially handing it over to authorities for investigation, Republicans alleged, Democrats leaked the allegations to the press in a last-ditch effort to stop Kavanaugh from reaching the Supreme Court.

Sen. Tom Cotton, a Republican from Arkansas, threatened an investigation over the weekend to get to the bottom of how or why Ford’s confidential letter was made public.

Feinstein, a self-proclaimed feminist who is the ranking Democrat on the Senate Judiciary Committee, blamed the victim.

“It’s my understanding that her story was leaked before the letter became public, and [Ford] testified that she had spoken to her friends about it and it’s most likely that that’s how the story leaked, and she had been asked by press,” Feinstein said at the Sept. 27 hearing.

But this isn’t the only point in which the process broke down.

Multiple times, Senate Judiciary Chairman Chuck Grassley and his staff offered to send committee investigators to California to interview Ford in person. Sen. Lindsey Graham, the Republican from South Carolina who passionately came to Kavanaugh’s defense during last week’s committee hearing, pointed this out Sunday on ABC’s “This Week.”

“I’m shocked not one media outlet is reporting that during the hearing, [Ford] didn’t know that the committee was willing to go to California again,” Graham said. “If the shoe were on the other foot, [and] the Republicans had done this, we would be destroyed. We would be under ethical investigation.”

On three occasions, Grassley’s staff told Ford’s lawyers that they were willing to go to her.

“[M]y staff would still welcome the opportunity to speak with Dr. Ford at a time and place convenient to her,” Grassley wrote in a Sept. 19 letter to Debra S. Katz, one of Ford’s attorneys.

On Sept. 21, Judiciary Committee staff send another email to Katz, offering to conduct the hearing in California—behind closed doors:

On Sept. 22, the committee staff followed up a third time with both Katz and Michael Bromwich, another attorney working for Ford.

“[A]s we have offered, committee investigators are available to meet with Dr. Ford, anywhere and anytime, if she would prefer to provide her testimony outside of a hearing setting,” the committee staff wrote.

And in case of any confusion, Grassley tweeted this offer. “Come to us or we to u,” the Iowa Republican wrote in part on Sept. 21.

Five times now we hv granted extension for Dr Ford to decide if she wants to proceed w her desire stated one wk ago that she wants to tell senate her story Dr Ford if u changed ur mind say so so we can move on I want to hear ur testimony. Come to us or we to u

The offer was reiterated in two separate letters to Democrats on the Judiciary Committee, with Grassley writing to Feinstein Sept. 19: “I am even willing to have my staff travel to Dr. Ford in California—or anywhere else—to obtain her testimony.”

On Sept. 20, Katz, one of Ford’s lawyers, finally acknowledged the offer. “Dr. Ford has asked me to let you know that she appreciates the various options you have suggested,” she wrote in a letter.

And on Sept. 22, Ford made clear she was leaving the negotiating in her lawyers’ hands, writing to Grassley:

I have asked my lawyers to continue discussions with your staff about the conditions you have proposed. As I am not a lawyer or a Senator, I am relying on them and you to ensure that the Committee will agree to conditions that will allow me to testify in a fair setting that won’t disrupt families and become a media TV show.

But then, at the committee hearing Sept. 27, Ford testified under oath during Rachel Mitchell’s questioning that she “wasn’t clear” about Grassley’s offer to travel to her.

Mitchell: “[I]t’s been reported by the press that you would not submit to an interview with the committee because of your fear of flying. Is that true?”

Ford: “Well, I was willing—I was hoping that they would come to me, but then I realized that was an unrealistic request. … So that was certainly what I was hoping, was to avoid having to get on an airplane, but I eventually was able to get up the gumption with the help of some friends, and get on the plane.”

Mitchell: “Was it communicated to you by your counsel or someone else that the committee had asked to interview you and that they offered to come out to California to do so?”

Ford: “I just appreciate that you did offer that. I wasn’t clear on what the offer was. If you were going to come out to see me, I would have happily hosted you and had you—had been happy to speak with you out there. I just did not—it wasn’t clear to me that that was the case.”

Speaking directly to Ford, Grassley confirmed that he did, in fact, offer to travel to California to conduct the interview “anywhere or anytime”:

Dr. Ford, I’m going to correct the record, but it’s not something that I’m saying that you stated wrongly, because you may not know the fact that when you said that you didn’t think it was possible for us to go to California as a committee or our investigators to go to California to talk to you, we did, in fact, offer that to you. And we had the capability of doing it and we would’ve done it anywhere or anytime.

So what happened? Did Ford lie under oath about being unaware of the Republicans’ offer to travel to California? Or more likely, did Ford’s attorneys refuse to inform her about Grassley’s offer?

If Ford’s attorneys didn’t inform her of Grassley’s offer, the next obvious question is why? Did her attorneys and the Democrats want this public spectacle all along?

Graham is right. If Democrats were in control of the committee and discovered that an offer to interview their witness in person (and in private) was withheld from that witness, Republicans would be accused of obstruction and turning a woman’s pain into a Jerry Springer TV show—precisely what Ford said she wanted to avoid.

The media would be banging on their doors and blocking elevators, demanding to know why no one made their witness—a sexual assault victim—aware that she didn’t have to tell her story in a public hearing before the world.

Either Ford was in on it, or Democrats and her attorneys have some explaining to do.

Because if Ford is as fearful of flying as she claimed under oath, her attorneys made an interesting decision in dragging a sexual assault victim across the country to testify in last week’s public spectacle. Particularly when that questioning could have easily been done in California, behind closed doors.