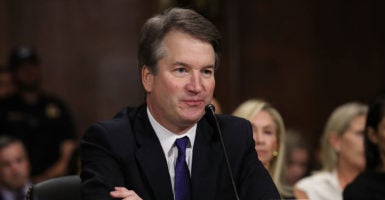 The perjury push comes as Democrats still lack corroborating evidence to support professor Christine Blasey Ford‘s claim that Kavanaugh tried to drunkenly force himself on her while the two were in high school.

Other than Ford, none of the alleged party attendees—including Ford’s longtime friend, Leland Keyser—have any recollection of the event happening.

Deborah Ramirez, Kavanaugh’s former Yale classmate who accused him of drunkenly placing his penis in her face during college, was reportedly unsure if Kavanaugh was the perpetrator shortly before she came forward. No other eyewitnesses have corroborated her account.

Maryland woman Julie Swetnick accused Kavanaugh of being present while girls, including herself, were drugged in order to gang rape them. No other eyewitnesses have confirmed Swetnick’s account

Republican Senate leaders agreed to give the FBI up to a week to probe Ford and Ramimerz’s claims as part of an expanded background investigation into Kavanaugh, but some congressional Democrats are already saying that the investigation doesn’t go far enough.

The House of Representatives “would have to” investigate Kavanaugh for perjury if he is confirmed without the Senate opening a new investigation for that purpose, Democratic New York Rep. Jerrold Nadler on Sunday told ABC’s George Stephanopoulos.

“We would have to investigate any credible allegations, certainly of perjury and other things that haven’t been properly looked into,” Nadler said.

.@GStephanopoulos: "Would Justice Kavanaugh have to recuse himself from cases involving congressional Democrats?"

Rep. Jerrold Nadler: "I think the proper thing would be, yes … I was astonished at his rant … he's supposed to be non-partisan" https://t.co/Lt6UK9KuUw #ThisWeek pic.twitter.com/ls7NVLlpTu

Vermont Sen. Bernie Sanders on Saturday demanded that the FBI expand the scope of its background investigation into accusations against Kavanaugh to include perjury.

Sanders said the FBI should investigate, among other things, entries into Kavanaugh’s high school yearbook to determine whether he treated women “with dignity and respect.”

“Judge Kavanaugh testified he treated women ‘as friends and equals’ and ‘with dignity and respect,’ numerous entries in his school yearbook would seem to contradict this,” Sanders wrote.

Senate Judiciary Chairman Chuck Grassley on Saturday retorted with a letter of his own, criticizing Sanders’ demands as a political stunt.

Shorter Chairman @ChuckGrassley: the supplemental FBI investigation is for those with a good faith desire to get the truth, not a smear tool for #resistance Senators who had committed to oppose Judge Kavanaugh before he was even nominated. pic.twitter.com/TheKHg5fxP

House Minority Leader Nancy Pelosi on Saturday floated the possibility of impeaching Kavanaugh—either from the Supreme Court or from his current seat on the D.C. Circuit Court of Appeals—“if he is not telling the truth to Congress or to the FBI.”

.@nancypelosi says if he’s not telling the truth, he’s not fit to be on the Supreme Court or the court he’s on right now. #TribFest18

Other Democrats have embraced the idea of investigating Kavanaugh—and possibly trying to impeach him—if they retake a majority in the House or Senate in this November’s midterm elections.

“This has become a pattern: when Ford’s allegations started unraveling, the Democrats started pushing out more and even less-well founded allegations,” Carrie Severino, policy director at the pro-Kavanaugh Judicial Crisis Network, told The Daily Caller News Foundation in an email.

“When a hearing was set they insisted that wasn’t enough and further FBI interviews were necessary. Now that the FBI is doing an investigation they are turning to absurd attempts at nitpicking and intentionally misinterpreting Kavanaugh’s testimony,” Severino said.

“This has never been about finding the truth; it has always been about delay and making outrageous claims to rile up their far-left base,” she added.

Avenatti on Friday said that support for both expanding the Supreme Court to 11 seats and for a “full and complete FBI investigation” into Kavanaugh should be litmus tests for Democratic hopefuls in 2020.

“I think the expansion to 11 should be a litmus test and I think the other litmus test should be a full and complete FBI investigation, and if it is shown that Brett Kavanaugh perjured himself or committed any of these acts, he absolutely should be removed from the Supreme Court,” Avenatti told Axios.