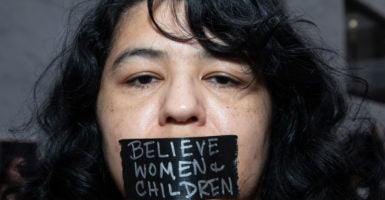 As you may know, Brett Kavanaugh has already been found guilty of crimes against leftism, so now we’re just working our way backward from the ideological indictment to the personal one.

Nothing but a confession of wrongdoing and a surrender will stop Democrats from accusing Kavanaugh of being a sexual predator, despite, to this point, a dearth of evidence, a lack of corroborating witnesses, and increasingly flimsy charges.

Any efforts by Republicans, whether politically motivated or genuine (or both), to treat Christine Blasey Ford’s accusation seriously have only inspired Democrats and their allies to ratchet up the McCarthyism.

Kavanaugh, after all, is the perfect straw man to pay for the sins of all men, past and present. In this paranoid environment, erected on the bad faith of identity politics, any questions regarding credibility, motivation, substantiation, or due process can conveniently be dismissed as an attack on women.

For at least a week, Democrats have groused about a bunch of elderly white Republican men leading an “interrogation” of Ford. You remember the media lecturing us about the destructive “optics.” Ford’s lawyers, in their drawn-out, demand-filled negotiations, questioned whether their client could ever get an impartial hearing.

“When 11 men interrogate … ” begins a Politico headline over an article detailing liberal talking points on the perils of questioning a female witness. “The specter of Anita Hill looms over next week’s hearing on Christine Blasey Ford’s sexual assault allegation,” the story says.

So the GOP hired an accomplished female sex crimes prosecutor, not a defense lawyer, who can’t be dismissed merely over her sex. But it’s hard to keep up with people who lack any consistent principles.

A New York Times op-ed titled “Man Up, Grassley. Question Blasey Ford Yourself,” reflects the newest positioning by Democrats on the judiciary committee, which argues that “[h]anding off the questioning of Dr. Ford to female staff members would be based on the risible idea that the questioning of sexual assault survivors is ‘women’s work.'”

So no men. And no women. Maybe all accusers should only be questioned by Democrats?

It seems to me that anyone interested in getting to the truth would prefer professional counsel over a bunch of politicians. Certainly, having lawyers leading the hearings might mitigate some of the grandstanding and characteristically useless questions that dominate congressional hearings. Unless, that is, it’s the optics that matter most.

“Dr. Blasey Ford isn’t on trial,” explained Sen. Kamala Harris, who’s already declared she believes the accuser, although Ford hasn’t testified or turned over any of her supposed corroborating evidence to the Judiciary Committee as of this writing, “This hearing is to determine whether Kavanaugh is qualified to sit on the Supreme Court. By hiring a private attorney to cross-examine Dr. Blasey Ford, Republicans are trying to intimidate her and avoid being held accountable by voters.”

Like Ford, former prosecutors like Harris will be grilling Kavanaugh—who, as far as I know, hasn’t made any demands to change the process regarding by whom or how he is “interrogated”—over every beer he’s ever consumed, every sexual interaction he’s engaged in, and every grounding his parents ever gave him in an effort to paint him as a deviant.

But one minute Democrats are telling us that Kavanaugh’s nomination is one of the most pivotal moments in American history. His lifetime nomination will lead to a real-world “Handmaid’s Tale,” back-alley abortions, and the end of democracy. Worse, now, Republicans are attempting to put a sexual predator on the patriarchal court to ensure all this happens.

And when conservatives point out the presumption of guilt is an un-American and authoritarian way for government (we’re not talking about public perception here) to conduct its business, the Kavanaugh hearing is instantaneously transformed into nothing but a mere “job interview.” Pick one.

This kind of transparent bad faith not only makes a joke of the process, it ensures that future legitimate allegations of sexual misconduct will be immediately dismissed by millions of skeptical Americans as politically motivated.