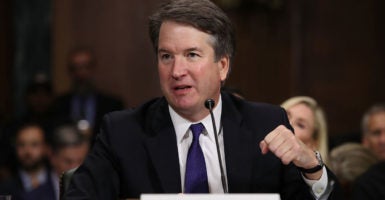 First, though, the FBI will supplement its previous six background investigations on Kavanaugh.

The vote came a day after a high-stakes committee hearing where the D.C. Circuit judge defended himself against late-breaking allegations of sexual misconduct.

Sen. Jeff Flake, R-Ariz., whose vote was in question, announced Friday morning that he would “vote to confirm” Kavanaugh.

But just before the committee vote shortly before 2 p.m., Flake said his final vote on Kavanaugh was contingent on the FBI’s conducting an investigation of the “current allegations” against Kavanaugh that would be limited to no more than a week.

“I would only be comfortable moving on the floor [after] the FBI has done more investigation than it has done already,” Flake told his colleagues on the committee.

Democrats, who I think have been justifiably uncomfortable moving ahead, could publicly, in an effort to bring this country together, say that we would feel better—I’m not expecting them to vote yes—but not to complain that an FBI investigation has not occurred.

This is what I’m trying to do. This country is being ripped apart here and we’ve got to make sure we can do our due diligence. But I think we can have a short pause and make sure the FBI can investigate. … It would be short and limited in scope to the allegations that have been made. I would encourage Democrats who we have talked to before to endorse that kind of thing and move on.

Sen. Chris Coons, D-Del., and other Democrats could be seen huddling with Flake before Judiciary Chairman Charles Grassley, R-Iowa, called the committee to order for the vote.

Grassley said he supported Flake’s position, but that he didn’t control this.

The timing of a full Senate vote would be up to Senate Majority Leader Mitch McConnell, R-Ky., and Minority Leader Charles Schumer, D-N.Y.

President Donald Trump issued a statement late Friday announcing that he had ordered the FBI to conduct an inquiry.

“I’ve ordered the FBI to conduct a supplemental investigation to update Judge Kavanaugh’s file,” Trump said. “As the Senate has requested, this update must be limited in scope and completed in less than one week.”

Trump told reporters earlier Friday that Christine Blasey Ford’s testimony on Thursday was “compelling” during the hearing Thursday and that Kavanaugh did well.

This FBI already has conducted six background investigations of Kavanaugh, who also issued a statement:

Throughout this process, I’ve been interviewed by the FBI, I’ve done a number of ‘background’ calls directly with the Senate, and yesterday, I answered questions under oath about every topic the Senators and their counsel asked me. I’ve done everything they have requested and will continue to cooperate.

During earlier remarks at the committee meeting Friday, Grassley said both Ford and Kavanaugh got a chance to speak the day before about the allegation.

The votes of two Republican senators, Lisa Murkowski of Alaska and Susan Collins of Maine, are still in question. A Democrat, Joe Manchin of West Virginia, has said he is undecided.

Kavanaugh has been a judge on the U.S. Circuit Court of Appeals for the District of Columbia since 2006.

Ford, 51, a California research psychologist and college professor, was questioned in a committee hearing Thursday about her allegation that Kavanaugh, 53, sexually assaulted her while drunk when both were teens in high school.

“This is not someone who reflected an impartial temperament or the fairness or evenhandedness one would see in a judge,” Feinstein said. “This is someone who was aggressive and belligerent. I have never seen someone who wants to be elevated to the highest court in our country behave in that manner. In stark contrast, the person who testified yesterday and demonstrated a balanced temperament was Dr. Ford.”

Ford’s lawyer, Debra Katz, issued a statement saying the additional FBI review shouldn’t be limited in time or scope, as Flake had proposed.

“A thorough FBI investigation is critical to developing all the relevant facts,” said Katz, who was recommended to Ford by Feinstein, adding:

Dr. Christine Blasey Ford welcomes this step in the process, and appreciates the efforts of Senators Flake, Murkowski, Manchin and Collins—and all other senators who have supported an FBI investigation—to ensure it is completed before the Senate votes on Judge Kavanaugh’s nomination. No artificial limits as to time or scope should be imposed on this investigation.

Sen. John Cornyn, R-Texas, said before the committee vote Friday that the process was unfair to both sides.

“This entire process has been cruel and reckless and indecent for both Dr. Ford and Judge Kavanaugh,” Cornyn said.

The Texas Republican noted that Ford’s lawyers apparently didn’t inform her that the committee staff would interview her in California, which forced the political theater of Thursday’s public testimony. He also strongly criticized the public release of her confidential letter to Feinstein.

“What we hear from Dr. Ford is that she did not authorize the release of the letter of July 30 she sent to Sen. Feinstein, but it was leaked,” Cornyn said. “She said the only people who had possession of it were her lawyers, Sen. Feinstein and Rep. [Anna] Eshoo. You can reach your own conclusion, but the letter had to come from somewhere.”

“It sure looks to me, at least the circumstantial evidence would seem to point, to the desire to have exactly what we had yesterday and to contribute what has accurately been described as a circus atmosphere, cruel, reckless, no sense of decency,” Cornyn added.

Besides Kavanaugh and classmate Mark Judge, Ford said Leland Ingham Keyser and Patrick J. Smyth were the others at the gathering of teens more than 35 years ago in Montgomery County, Maryland.

However, under penalty of felony, everyone named by Ford said in sworn statements to the committee that they did not remember the gathering. Keyser said she didn’t remember knowing Kavanaugh.

Sen. Patrick Leahy, D-Vt., warned Friday of grave circumstances for the Senate if Kavanaugh is confirmed:

“What’s the difference between Gorsuch and Kavanaugh? It’s the Kennedy seat. If you don’t get that, you’re not paying much attention,” Graham said, adding:

Gorsuch is an even swap for Scalia. This is high-stakes stuff. This is the seat where the guy in the middle is at risk. Kavanaugh clerked for Justice Kennedy. Would you [Democrats] have picked him? No. But you lost the election. That does have consequences. When I said it about [President Barack] Obama winning, I meant it.

“If you’re a gang rapist when you’re a sophomore and a junior in high school, you don’t let it go,” Graham said of one woman’s allegations against Kavanaugh.

“Every woman who actually knows Brett Kavanaugh has come forward to say he is not that kind of guy,” Graham said. “He has been at the highest level of public service under tremendous scrutiny, six FBI investigations, and we missed the sophomore-junior gang rapist. We didn’t miss it. It’s a bunch of garbage.”

All I can say about Ms. Ford is that I feel sorry for her and I do believe something happened to her. And I don’t know when and where, but I don’t believe it was Brett Kavanaugh.  As a prosecutor, you couldn’t get this out of the batter’s box because in America before you can accuse somebody of a crime, you have to tell them when it happened and where it happened and you have to prove beyond a reasonable doubt it did happen.

Sen. Cory Booker, D-N.J., wrote in a 1992 piece for The Stanford Daily about his “groping” a female friend during his youth, adding that “the next week in school she told me that she was drunk that night and didn’t really know what she was doing.”

He gave a lengthy argument Friday against Kavanaugh.

“She was a courageous, heroic woman telling her truth of sexual assault and sexual harassment,” Booker said of Ford. “This is what was done to me, she said. Many of my colleagues said they found Dr. Ford credible. But, to confirm Judge Kavanaugh, you would have to say not only that you don’t believe her, Dr. Ford, but that you are so certain this didn’t happen you are willing to force a vote now without any further investigation.”

However, after the Thursday hearing, ABA President Robert Carlson wrote a letter to the committee asking that the Senate vote “only after an appropriate background check into the allegations made by Professor Ford and others is completed by the Federal Bureau of Investigation.”

“The basic principles that underscore the Senate’s constitutional duty of advice and consent on federal judicial nominees require nothing less than a careful examination of the accusations and facts by the FBI,” the Carlson letter continued.

Grassley noted that only Carlson wrote the letter, and he was not speaking as someone who consulted the ABA body.

Late last year, Sen. Ben Sasse, R-Neb., criticized the ABA, stating in a commentary: “The American Bar Association is not neutral. The ABA is a liberal organization that has publicly and consistently advocated for left-of-center positions for more than two decades now.”