Why the Kavanaugh Process Became a Mad Political Circus 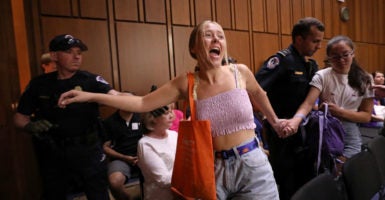 To say that the Senate confirmation process for Supreme Court nominee Brett Kavanaugh has turned into a circus is to give circuses a bad name.

Let’s review some of the weird stuff that has happened.

Democratic senators demanded that the Judiciary Committee hearing be postponed so they could study more material about a nominee they had already vowed to oppose.

One senator’s “I am Spartacus” moment about releasing confidential documents fizzled because the committee had already agreed to release them.

Yelling and screaming protesters were hauled away during the confirmation hearing, but many had no idea what they were actually protesting.

Senators accused Kavanaugh of believing that President Donald Trump cannot be investigated or prosecuted. He had actually only suggested that Congress consider legislation to delay the investigation or prosecution of a president until he is out of office. (And he said this back in 2008).

Senators who said that the American Bar Association’s rating is the “gold standard” for evaluating judicial nominees ignored its unanimous “well qualified” rating for Kavanaugh.

Sen. Mazie Hirono, D-Hawaii, said Kavanaugh does not deserve the presumption of innocence because of the way he “approaches his cases” and his alleged views on “women’s reproductive choice.”

Sen. Kamala Harris, D-Calif., even earned the rare “4 Pinocchios” from the Washington Post Fact Checker for claiming that Kavanaugh’s description of a client’s views were actually his own.

And then, as if on cue, uncorroborated accusations of sexual misconduct from nearly four decades ago surfaced—not when they were made, but when Kavanaugh’s opponents might use them to maximum political advantage. (Like that never happened before).

What would make people behave this way?

One explanation is that the left’s visceral disdain for the president translates into absolute opposition to his nominees.

Nearly 80 percent of Trump’s nominees to the U.S. Court of Appeals, for example, received a “well qualified” rating from the American Bar Association, higher than the previous four presidents of both parties. And yet, these nominees have received an average of 33 negative votes in the Senate, compared to only 11 for President Barack Obama’s “well qualified” nominees, six for President George W. Bush’s, and just five for President Bill Clinton’s.

Judges have two basic tasks. First they interpret, and then they apply written law—such as statutes or the Constitution—to decide individual cases. You can tell what kind of judge someone is by whether he or she interprets and applies the law impartially or politically. An impartial judge deliberately takes his own priorities or views out of the equation; a political judge deliberately inserts them.

If the Constitution is the rulebook for government, do judges have to follow it too or can they manipulate the rules and do as they please?

But rather than persuade the American people to adopt their political agenda, the left has tried to change the system by installing political judges.

America’s founders designed the judiciary to be the weakest of the three branches, yet the steady appointment of political judges has transformed it into the most powerful branch. Political judges have been, to use Thomas Jefferson’s description more than two centuries ago, twisting and shaping the Constitution into any form they choose.

In 1937, about the time this trend toward a more political judiciary began, Justice George Sutherland warned about judges who appear to be interpreting the law but are really amending it “in the guise of interpretation.”

There’s a lot at stake in the kind of judges a president appoints. Impartial judges let the people run the country; political judges do it for them.

Kavanaugh’s opponents are doing everything to defeat his nomination for the very reason America needs him on the Supreme Court: He is an impartial judge, not a political one.