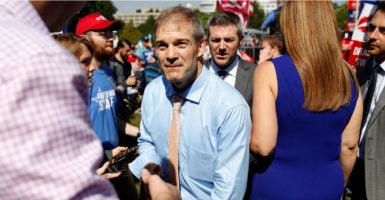 Conservative lawmakers say they are disappointed with a lack of conservative priorities in a new spending package, some saying it goes against stipulations President Donald Trump outlined when signing the last spending bill.

“Americans elected Republican majorities to the House and Senate to rein in federal spending and return to regular order,” Rep. Jim Banks, R-Ind., said in a written statement provided to The Daily Signal.

The House approved the $855 billion spending bill by a vote of 361-61 Wednesday evening.

“In March, President Trump made it clear that moving forward, any spending package must also include conservative policy riders like funding for border security and protecting the right to life,” Banks said. “The bill before us does not address those requirements.”

Trump threatened to veto an omnibus spending package March 23 before ultimately signing it and vowing not to sign such a bill again.

“There are a lot of things we shouldn’t have had in this bill, but we were, in a sense, forced if we want to build our military, we were forced to have,” Trump said. “There are some things we should have in the bill. But I say to Congress, I will never sign another bill like this again.”

The House was expected to vote Wednesday on a continuing resolution for fiscal 2018 combined with a fiscal 2019 spending bill to fund the departments of Labor, Health and Human Services, and Defense that will keep the government funded through Dec. 7.

In a tweet Wednesday, the Associated Press quoted Trump promising that he would sign the funding measure.

The so-called cromnibus would provide over $855 billion in funding for 2019, making up two-thirds of the total discretionary budget, according to Justin Bogie, a senior policy analyst in fiscal affairs at The Heritage Foundation.

“Cromnibus” is lawmakers’ jargon for a continuing resolution, which is a temporary spending measure, combined with an omnibus, a large spending bill made up of smaller spending bills.

Conservative lawmakers say the spending bill, on which the House was to take a final vote, is too much like the one Trump threatened to veto earlier this year.

“For the second straight year of unified Republican governance—unified pro-life governance—Congress’ annual spending bills will include no new reforms protecting unborn children or getting federal taxpayers out of the abortion business,” Sen. Mike Lee, R-Utah, said in a speech Sept. 18.

Lee noted that although the House made an effort to include conservative values in its funding package, the Senate ultimately stripped them out before its 85-7 vote last week to pass the package.

Those provisions included stopping taxpayer funding of Planned Parenthood and eliminating federal funding of research on aborted fetal tissue, he said, and legislation protecting pro-life individuals and groups from discrimination in funding.

“None of these modest, commonsense spending reforms survived the House-Senate negotiations,” Lee said. “None was made a priority by the people empowered to set the priorities.”

The Arizona Republican also expressed frustration for the lack of funding for a border wall.

The spending deal is not a win for conservatives, Bogie, Heritage’s senior policy analyst for fiscal affairs, told The Daily Signal in an email.

“The current funding packing moving through Congress is a failure on many levels,” Bogie said, adding:

Not only does it adhere to the higher spending levels of the irresponsible budget deal passed earlier this year, but it also fails to make any process on conservative policy priorities. Passing appropriations bills on time is important, but what’s in those bills matters just as much. Aside from higher defense spending levels, there is little about this bill for conservatives to like.