How Trump Rescued Our Economy From Obama’s ‘New Normal’ 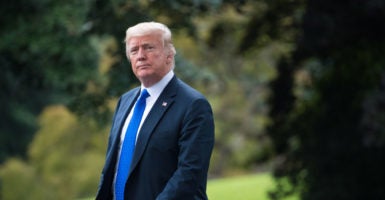 The economy has recovered and expanded under President Donald Trump. (Photo: Kevin Dietsch/UPI/Newscom)

It’s hard to believe that just two short years ago, our economy was limping along with no sign of a massive boom around the corner.

Beyond any shadow of a doubt, the pivotal factor in the last two years has been President Donald Trump.

Consider this. From 2009 to 2014, real median income fell overall. It did jump a few times between 2012 and 2014, but the overall trend was one of malaise. The reason? President Barack Obama’s regulations and taxes sat like a wet blanket over our economy.

Many of his policies aimed at curing perceived social injustices rather than promoting economic growth. He reasoned that it was an injustice that every American did not have health insurance, and that CEOs made hundreds of times more income than the average worker. It was also an injustice that banks and big business took advantage of consumers.

Obama convinced Congress to pass Obamacare in 2010, which resulted in health insurance being extended to an additional 6 percent of the population. But Obamacare came with new taxes—21 to be exact—and these helped suppress middle-class income, slowing economic growth.

Obamacare also forced employers to provide health insurance to all full-time workers or pay a fine, which could be as high as $3,000 per employee. This added to the cost of labor, which again had the effect of slowing growth. Since Obama defined a full-time employee as anyone working at least 30 hours per week, employers hired more part-time workers. This drove down household income and slowed economic growth.

Obama also made the 2001 Bush tax cuts permanent for all Americans, except for the highest income earners. For them, taxes increased by 10 percent. This reduced the amount of investment capital flowing into our economy, which slowed economic growth and tended to reduce household income.

Obama also said that the financial crisis was a result of predatory lending by banks. This occurred when households freely applied for mortgages that they simply could not afford. Because Fannie Mae and Freddie Mac were buying these predatory mortgages from banks, the banks made those loans.

Obama convinced Congress to pass the Dodd-Frank bill, which stopped banks from predatory lending. The problem was that Dodd-Frank reduced all lending, which slowed economic growth and resulted in countless small community banks having to close their doors.

And yet again, this had the effect of reducing household income.

It’s no wonder that Obama was the only president in history to never see economic growth above 3 percent. The economy averaged just over 2 percent for his entire two terms. He referred to 2 percent growth as the “new normal.”

Trump flatly rejected this “new normal.” After entering office in January 2017, he spent much of February and March reversing many of Obama’s counterproductive regulations. By April 2017, the economy was back growing at a healthy 3 percent, which has since been maintained or increased.

By the end of 2017, Trump had convinced Congress to cut income taxes for all Americans, including those who supply capital: high income-earners and corporations. Since April of this year, the economy has been booming at a rate of more than 4 percent.

That growth has driven down underemployment, increased the proportion of Americans in the labor force, increased the number of part-time employees finding full-time work, boosted wages, and reduced the unemployment rate overall.

This all will lead to ever higher incomes for families. The real median income is set to hit a record level by the end of 2018.

Some have said that most of the growth will affect the highest income-earners. Whatever benefit they are getting (and they are certainly getting a lot), the facts are plain and simple: Over 700 companies have boosted wages, given bonuses and other benefits to their employees because of tax reform.

As President John F. Kennedy said, “A rising tide will lift all boats.” It’s happening. Why would we try anything else?