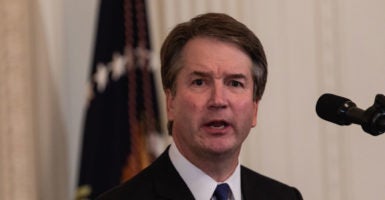 Kavanaugh denied allegations from a third woman in a statement Wednesday, saying, “This is ridiculous and from the Twilight Zone. I don’t know who this is and this never happened.” (Photo: Cheriss May/ZUMA Press/Newscom)

A woman and friend who knew Supreme Court nominee Brett Kavanaugh as a high school student says allegations of sexual misconduct from a third accuser are “false.”

“This claim is absolutely false and absurd,” Meghan McCaleb, a friend of Kavanaugh’s since high school, told The Daily Signal of allegations from Julie Swetnick, which were made public Wednesday.

Swetnick, who says she is a graduate of Gaithersburg High School in Gaithersburg, Maryland, claims she saw Kavanaugh “drink excessively at many of these parties and engage in abusive and physically aggressive behavior towards girls, including pressing girls against him without their consent, ‘grinding’ against girls, and attempting to remove or shift girls’ clothing to expose private body parts.”

“We never hung out with anyone from Gaithersburg High School, there was never any drug use at our parties, and the fact that she is coming out and saying that is such an insult to Brett and to all of us,” McCaleb said.

“It makes our community look bad and our reputation, and Brett was just not like that ever. No one was.”

Below is my correspondence to Mr. Davis of moments ago, together with a sworn declaration from my client. We demand an immediate FBI investigation into the allegations. Under no circumstances should Brett Kavanaugh be confirmed absent a full and complete investigation. pic.twitter.com/QHbHBbbfbE

Here is a picture of my client Julie Swetnick. She is courageous, brave and honest. We ask that her privacy and that of her family be respected. pic.twitter.com/auuSeHm5s0

Swetnick, according to her declaration, has done work for the Internal Revenue Service and the Treasury Department, among other government institutions.

“The fact that Michael Avenatti is coming up with this the day before the hearing is outrageous,” McCaleb said.

“I can just tell you that Brett was always a responsible, decent, polite guy, and he would never, ever do anything like this, ever,” she said.

Kavanaugh denied Swetnick’s allegations in a statement Wednesday, saying, “This is ridiculous and from the Twilight Zone. I don’t know who this is and this never happened.”

Avenatti is a third rate lawyer who is good at making false accusations, like he did on me and like he is now doing on Judge Brett Kavanaugh. He is just looking for attention and doesn’t want people to look at his past record and relationships – a total low-life!

Deborah Ramirez, 53, who attended Yale University at the same time as Kavanaugh, accused him of exposing himself to her at a party.

“I was embarrassed and ashamed and humiliated,” Ramirez told The New Yorker, which first reported the allegation.

The first allegation of sexual assault came from a Northern California woman, Christine Blasey Ford, now a 51-year-old research psychologist, who told The Washington Post that Kavanaugh held her down, groped her, and tried to remove her clothes in a bedroom during a house party in the early 1980s in Montgomery County.

“I have never heard of her in my life and I do not know one person who went to Gaithersburg High School,” McCaleb said of Swetnick.

McCaleb attended and graduated in 1984 from Georgetown Visitation Preparatory School, an all-girls Catholic high school, and was friends with Kavanaugh throughout high school and after.

Kavanaugh graduated from the all-boys Georgetown Preparatory School in 1983.