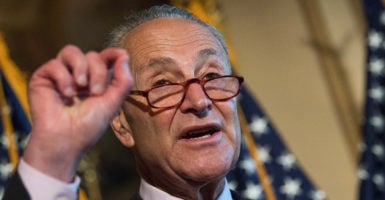 In 2009, Senate Minority Leader Chuck Schumer said that a judicial record is the “best way to evaluate a nominee” and even more important than the confirmation hearing. (Photo: Kevin Dietsch/UPI/Newscom)

Americans hold politicians in low esteem. In a 2017 Gallup poll on the honesty and ethical standards of people in 21 different fields, 60 percent rated politicians “low” or “very low” in this regard—(versus only 39 percent feeling that way about car salesmen, for example).

A poll at the 2014 midterm election found that only 4 percent of Americans believe that politicians keep their promises. Not a pretty picture.

Senate Minority Leader Chuck Schumer, D-N.Y., is out to show us that he’s one politician who can keep a promise. On July 9, within minutes of President Donald Trump’s announcement of Judge Brett Kavanaugh as his Supreme Court nominee, Schumer vowed to “oppose Judge Kavanaugh’s nomination with everything I have.” When he said everything, he meant it.

I can’t prove it, but if I were a betting man, I would wager that Schumer’s statement was written ahead of time, leaving a blank for the nominee’s name. Other Senate liberals, such as Kamala Harris, D-Calif., and Mazie Hirono, D-Hawaii, actually announced their opposition nearly two weeks earlier, without even knowing who the nominee would be.

Nothing that the confirmation process had to offer was relevant to these senators because they already had the one piece of information, the one word, that really mattered: Trump. They would oppose the nominee because he or she would be Trump’s nominee. Period.

It was more than strange that senators who long before had made up their minds against Kavanaugh would complain that they needed more time to review more information about him. Sen. Richard Blumenthal, D-Conn., said he had thoroughly reviewed Kavanaugh’s record when he announced his opposition in early July yet tried to postpone the hearing so he could review Kavanaugh’s record.

In 2009, Schumer said that a judicial record is the “best way to evaluate a nominee” and even more important than the confirmation hearing. Sen. Patrick Leahy, D-Vt., agreed that “looking at what kind of judge a nominee has been means we do not have to speculate about what kind of a justice” he will be. Neither one of them is interested in Kavanaugh’s judicial record today.

Schumer and Leahy have said that the American Bar Association’s rating is the “gold standard” for evaluating nominees. The ABA unanimously rated Kavanaugh well qualified, which means, the ABA explains, that he meets “the very highest standards of integrity, professional competence and judicial temperament.” That no longer matters either.

No, the only thing that matters to liberals is preventing Trump’s nominee from joining the Supreme Court. To pursue that political goal, Senate Democrats picked up the script from the beginning of the previous Republican presidency. Within days of President George W. Bush taking office in 2001, Democratic Leader Tom Daschle vowed to use “whatever means necessary” to defeat his judicial nominees.

That’s what Democrats are doing today, by any means necessary. They automatically credit an accusation even though every person the accuser names denies any knowledge of it. Democrats demand a new hearing for an accuser who cannot identify the time or the place of an alleged incident. They refuse to share with the rest of the Judiciary Committee what they claim is evidence against Kavanaugh.

And, when The New Yorker traffics in what it admits is an unsubstantiated rumor, the hit piece’s author says the accuser came forward because “Democrats came looking” for someone to say such things.

Partisan double standards, ignoring what really matters, smears, turning basic notions of fairness on their head—that is what it means to use “whatever means necessary.” Schumer is keeping his promise of opposing Kavanaugh with everything he has. It won’t be enough.