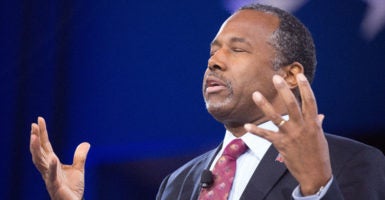 "There are so many people who have forgotten … who don’t cherish the America that we live in," Housing and Urban Development Secretary Ben Carson tells grassroots conservatives during the Values Voter Summit in Washington. Pictured: Carson during a speech March 4, 2016, at the Conservative Political Action Conference in National Harbor, Maryland. (Photo: Jeff Malet Photography/Newscom)

Up-from-poverty stories such as his own are a rebuke to New York Gov. Andrew Cuomo’s statement that America “was never that great,” Housing and Urban Development Secretary Ben Carson told an audience of social conservatives.

“There are so many people who have forgotten … who don’t cherish the America that we live in,” Carson said Friday at the Values Voter Summit, an annual event organized by the Family Research Council.

“There was a governor recently who said that America wasn’t great and had never been great. Can you imagine that?” Carson said, to loud boos from the audience.

Cuomo made headlines recently for saying that America “was never that great.”

Carson, the world-renowned neurosurgeon who sought the Republican presidential nomination in 2016, spoke in a personal capacity at the Values Voter Summit at the Omni Shoreham Hotel in Washington. The event’s schedule listed him as former director of pediatric neurosurgery at John Hopkins Hospital in Baltimore.

Carson focused his speech on his Christian faith and the obstacles he faced as a child in poverty.

“The Lord obviously has a pathway, and what we have to do is be willing to go down the pathway, even though it may not be the pathway that we had planned for ourselves,” Carson said, speaking about his decision to run for president.

It certainly wasn’t the pathway that I thought of when I was a 9-year-old kid sitting on the ghetto stairs in Boston after my parents had gotten divorced and we had moved from Detroit to Boston to live with relatives, having been homeless for a period of time.

He recalled gazing across the street in a crime-ridden Boston neighborhood as a child, feeling hopeless.

“I remember thinking that I would probably not live to be 20, 25 at the most,” Carson said. “That’s what I envisioned. There was no American dream in that vision.”

After dropping out of the Republican presidential race, Carson endorsed Donald Trump a week later, in March 2016, and became an adviser to his campaign.  Trump picked Carson to run HUD secretary a month after winning the general election.

Carson urged his audience Friday to speak with those they know about the upcoming midterm elections:

You need to talk to everybody in your sphere of influence and make sure that they understand that this is not about Democrats and Republicans. This is about people who love the America that they grew up in and that people fought and died for, and people who want to change us into something else.

Absent from his speech was any mention of recent criticism of the Department of Housing and Urban Development for hiring senior employees without experience in housing policy.

The Washington Post published an analysis Thursday of HUD officials that said 24 of the agency’s 70 highest-paid employees lacked such experience, including Carson.

The Post quoted HUD spokesman Raffi Williams as saying in a written statement that appointing people with “varying experiences to government is not unusual” and the approach makes HUD a “more dynamic organization.”

Most of the top political appointees have housing backgrounds, Williams said.