The Next Migrant Crisis Could Come From This Syrian City 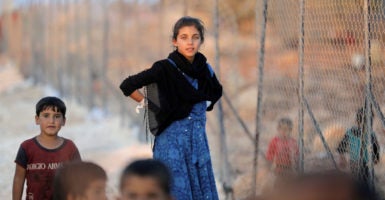 The city of Idlib is hosting millions of displaced refugees and remains vulnerable to President Bashar Assad. (Photo: Khalil Ashawi/Reuters/Newscom)

This is a transcript of an interview on the Sept. 20 episode of The Daily Signal podcast. It was edited for length, style, and clarity.

Daniel Davis: Well, as the civil war in Syria continues to rage, one city in eastern Syria is collecting millions of refugees. The city is Idlib, and given the right circumstances, it could produce the region’s next migrant crisis. Joining us now to discuss is Luke Coffey, director of the Allison Center for Foreign Policy Studies here at The Heritage Foundation. Luke, thanks for being on.

Luke Coffey: Thanks for having me.

Davis: Luke, there hasn’t been a ton of news coverage about Idlib. Can you give us just a lay of the land? What exactly is happening there?

Coffey: That’s actually absolutely right. While the U.S. has been focused on northeastern Syria where the U.S. troops are partnering with the Syrian Kurds and focus has been also with the Turks in northern Syria, not much attention has been paid to Idlib at all.

Idlib, as you mentioned, it’s the capital city of a province that’s also called Idlib. Over the past year, year and a half, the region has been used as a dumping ground of sorts for civilians who are fleeing other war zones inside Syria.

For example, names that your listeners would have heard over the past 12 to 18 months, Aleppo, Homs, for example, Eastern Ghouta, these are big cities where deals were brokered between the rebels that were fighting there and the Assad regime to allow civilians to transit safely out of Aleppo, for example, to Idlib.

The problem is, well, there are a couple of problems. The first one is those who took advantage of the safe passage to Idlib included some pretty bad nefarious groups, al-Qaeda-linked organizations, other terrorists. It just was always civilians that took advantage of this.

Then the second problem is how this has built up this huge internally displaced group of people that are away from their homes and who are stuck in Idlib with nowhere to go.

Katrina Trinko: You mentioned that some of the people there are terrorist-linked. Should people in the United States be worried about terrorism attacks coming out of this region or are they more focused on the area that they’re in?

Coffey: Well, for sure we should be concerned, and even the State Department has expressed its concerns about this. While most of the international community’s attention has been on ISIS, and rightfully so, it’s allowed the region in Idlib and around Idlib to become this incubator of sorts for other extremist groups.

Now you do have a full spectrum in Idlib, from the so-called moderates, which even by our definition today they wouldn’t seem very moderate, but relatively speaking they are moderate rebels, to the more extremist al-Qaeda-linked groups, groups that share in the same ideology as ISIS, for example.

To put it into context, they estimate that there are about 60,000 or so rebel fighters, opposition fighters in Idlib, and about half of them are linked to al-Qaeda-like groups. There are quite a few there.

Davis: Well, as we’ve seen really going back throughout the whole of Syrian’s civil war, it’s really been an intersection of foreign powers. You’ve had Russia involved, Turkey, of course, the United States to an extent, and just this week we’ve seen a new deal struck between Turkey and Russia that Turkey will add more troops to Idlib. Tell us about that deal and why is Turkey, what interest do they have in sending their own troops into Idlib?

Coffey: I would add to your list before I answer that question, Iran, Saudi Arabia, Qatar, these countries have been involved in some way or another inside Syria, often making the situation a lot worse than what it was before. But why Turkey’s concerned with this is that Turkey and Russia are sort of at odds with one another in Syria.

President Erdogan wants [Syrian President Bashar] Assad gone, President Putin wants Assad to remain. Idlib is the latest focus of competition and animosities and conflict between the two countries. Russia wants to restore Assad’s control over the region and they want to use military force to do this, but Turkey is concerned about what this could mean for refugees and the humanitarian crisis that could come from Idlib.

Remember, Turkey already has over 4 million, some estimates say 5 million, Syrian refugees inside Turkey, and they provide housing, education, health care for these refugees. There are refugees that were born in Turkey from Syrian parents who are now starting elementary school. They’ve become part of Turkish society. They don’t want any more. It’s understandable why they wouldn’t want any more.

Also, the European Union is concerned because they brokered a deal with Turkey. They would give Turkey some financial assistance and everything else, and then Turkey would hold onto all of these refugees so they don’t continue on through Greece, through the Balkans, and to Central and Eastern Europe, to Germany, Sweden, and France.

The European Union’s also concerned that if an attack happens in Idlib, where are these 3, 3 and a half million people going to go? It’s going to be Turkey and it’s going to be Europe.

Trinko: Right, so on that, since Europe and, I guess, Turkey as well are still reeling from the last refugee groups from Syria, what is the long-term prospect for Idlib? This doesn’t seem very tenable as a long-term solution, and yet you’re saying that all these political powers are doing whatever they can to avoid having to house all these refugees.

Coffey: Well, the latest is an agreement by Turkey and Russia that has created a buffer zone around Idlib and a demilitarized zone to separate the rebel and opposition fighters that are in Idlib away from the Russian and Syrian military forces. Then the idea is that over time, this area will slowly transition back under the control of Assad, and during that time Turkey will do everything it can to try to disarm and take care of the terrorists and the extremists themselves.

Since then, Russia and Syria have attacked and taken back three of these four. Idlib is the remaining one. That’s why all these internally displaced people are in Idlib, because they came from these other areas that were part of the so-called de-escalation zones. So there’s nothing in recent history that suggests that Russia can be a trustworthy partner in all this, so it remains to be seen how Turkey will react if indeed Russia does not live up to its side of the bargain.

Davis: If there’s one thing that could provoke the next migrant crisis from Idlib, what would that be?

Coffey: A full-on ground assault by Assad, by Syrian, Russian, and Iranian forces. We haven’t talked much about Iran today, but they have tens of thousands of militia members inside Syria, they’ve organized Hezbollah to fight inside Syria, and they’ve done a lot of Assad’s dirty work. Russia has provided all of the air force capability, the airstrikes, where Iran has provided a lot of the ground troops doing the really dirty work.

If you had a full-on ground assault in Idlib that didn’t take into consideration civilian casualties and the use of chemical weapons, for example, that would lead to a huge refugee crisis, I think.

Coffey: Well, the U.S. is actually very limited in what it can do and what it wants to do in Idlib. The U.S. focus in Syria is mainly with the Syrian Kurds defeating ISIS in northeastern Syria. Directly, we don’t have a dog in the fight in Idlib.

We have warned both sides to be very careful in how they proceed. We’ve seen messages come from the White House that President Assad and Russia should tread very carefully in Idlib, but unless chemical weapons are used, I don’t think the U.S. is going to do much of anything, and I’m not sure exactly what the U.S. could actually do in practice, unless you started talking about deploying tens of thousands of U.S. troops to defend Idlib.

Then when you consider some of the really bad people who are defending Idlib, that doesn’t really make for a sound policy. It’s very tragic and it’s unfortunate, but what the U.S. can do, I think, is if there is a humanitarian crisis, another refugee crisis because of Idlib, provide a lot of support to Jordan, to Turkey, to Lebanon, to the countries in the region who are hosting millions of refugees to help them handle this burden so it doesn’t further strain our allies in Europe.

Davis: All right, Luke Coffey, thanks so much for coming in and explaining that for us.